I missed posting a "Cool Projects" last week, due to being very busy setting things up for my horror host profile series, which we just posted the first article today. It's a fun way to celebrate the Halloween season!

This "Cool Projects" edition is going to mention a couple of this weeks new comics, featuring a new horror series from Walking Dead artist, Charlie Adlard, and the first  movie I'm screening as part of my #30DaysOfHorror list, since It's October. That means its Halloween season, so why not feature a new horror comic series and horror movie in this installment of "Cool Projects"? I'm repeating myself aren't I? 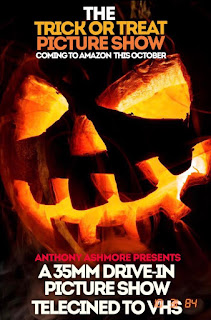 Filmmaker Anthony Ashmore reached out about his new horror anthology film recently called THE TRICK OR TREAT PICTURE SHOW, and offered me a pre-release screener. Since I was about to kick off my October horror marathon aka #30DaysOfHorror, I jumped at the chance.

This was is definitely for fans of nostalgia as it was filmed to pay homage to the early 80s VHS horror movies, from the VERY 80s synthesizer soundtrack to the feeling that I needed to adjust the tracking a few times. There were even great retro "theater snack break" ads that made me wish I was at a drive-in, watching classic monster movies.

It was fun to watch. I'd say my only gripe was the abrupt ending of each mini-film. It got a little confusing, but once I came to terms with the fact that each story was more like a teaser trailer, it made more sense.

Overall, between the music (which for some reason made me really want to watch The Toxic Avenger) and cinematography, THE TRICK OR TREAT PICTURE SHOW was a fun watch for anyone who grew up on VHS and bad 80s horror. If that's your thing, I'd definitely be on the lookout for it to be available to stream on Amazon in the next couple weeks. Dont forget to bring snacks, but if it does slip your mind, THE TRICK OR TREAT PICTURE SHOW ads will remind you, and even give you some good snack ideas. I dug it. 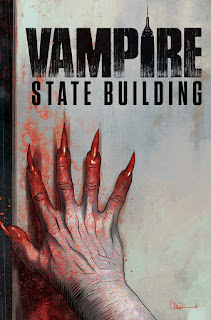 Vampire State Building brings us a young soldier thinking he's innocently meeting friends for some fun at the Empire Stste Building, before leaving for active duty,  when the building is attacked by a horde of vampires, who've been entombed in the walls since the building's construction.

Terry, our soldier, has to take action to defend his friends and potentially the whole city of New York from the vampire massacre in what looks like an action packed, gore filled thriller.

I gotta get ahold of this comic. I was a big fan of The Walking Dead and Charlie Adlard's art, so count me in. Also this comic is colored by Sebastian Gerard, and looks real nice (see the art in the trailer below). Ange and Patrick Renault are on writing duties, though I'm not familiar with their work. If you know their writing, let me know your thoughts. Either way I cant wait! This one hits comic stores October 2nd via Ablaze Publishing.

Here are a couple other notable comics in stores this week (October  2nd) on New Comic Book Day.

I'm sure you caught on to the horror theme lately. Expect more. This is my favorite time of year. Thanks for reading.