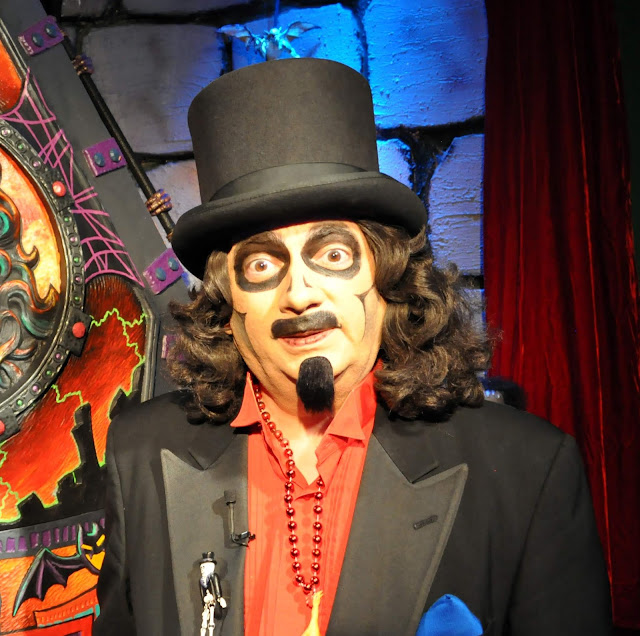 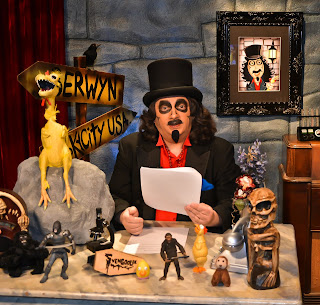 Svengoolie is celebrating his 40th year as a television horror host! DC Comics is getting into the 40th anniversary celebration with a Svengoolie and DC superhero crossover event, which thestevestrout.com is especially excited about. This multiple time horror host of the year, and hall of famer can be seen nationally every saturday on the MeTv network!

Svengoolie took time from his show and very busy appearance schedule to participate in our profile series. Check out his Q&A and more:

Svengoolie: The biggest inspiration was my mentor and friend, Jerry G. Bishop, the original Svengoolie. Here in Chicago, I was a fan of his radio and TV work, and sent him some jokes, and material, strictly as a fan. He liked what I sent him, found out I was a broadcasting student, and invited me to a taping. I ended up working with him, and, after the show was cancelled,worked with him in radio. A friend then asked him about doing Svengoolie as a sort of summer fill-in show on a TV station- Jerry didn’t want to play the character again, but he decided I could be “Son of Svengoolie”. We had some false starts, and it didn’t happen. When Jerry was hired to do a morning show in San Diego, he asked what I was going to do- I told him I might pitch a local TV show. He then said, if I wanted to try to do the Son of Svengoolie, I had his blessing. I shopped it around, and eventually got on the air- ironically on the same station Jerry was on. I was inspired to use it as a way to do comedy stuff, basically!-

Svengoolie: My earliest memory was, when I was about 4 or 5, in Chicago, on the station that got the Universal “Shock Theatre” package, there was a host- Terry Bennett, who played a beatnik ghoul named Marvin. I didn’t see him much- I wasn’t allowed to stay up that late, but saw him when we were visiting relatives. I barely remember much about him, but he seemed funny and creepy. Then, the next host in our area was Svengoolie, as I mentioned. He was the staff announcer on duty (live) on Friday nights- I had just graduated from high school earlier that year, and was watching for the movies, at first. He started doing funny re-joiners to the movie, and it evolved into his character, and went from voice-overs to actual video eventually.

Svengoolie: In June of 1979 on WFLD. This year is forty years that I’ve been the character. Even in times when I didn’t have a regularly scheduled show, I was doing the character for public and media appearances. I eventually got hired at WCIU, the U in Chicago, and when our company started the MeTV network, they put me on it. I became simply “Svengoolie” because Jerry decided “you’re all grown up- just be Svengoolie!”

Svengoolie: Honestly, being seen all over the country, and having the show become a success nation-wide is the main highlight. Finding out that celebrities, people whose work I enjoy, actually enjoy what I do is another- I mean, who would expectthat Mark Hamill, Bill Hader,  Gilbert Gottfried, special effects and make-up wizard Rick Baker, Robert Englund,and even Elvira herself  would be fans?! And, the current “Svengoolie Meets the DC Universe” storyline, running in all the DC Comics, with the first chapter in the Oct. 30th books is a dream come true for a lifelong comics fan.-

Svengoolie: I don’t have a single favorite- I like different movies for different reasons. At the top of the list, though, are the Universal classics- Frankenstein, Bride of Frankenstein, Dracula, Wolf Man, the Mummy, and Creature from the Black Lagoon- which are also favorites for me to run- and the original “Nightmare on Elm Street” and “Halloween” as well. And I love the Ray Harryhausen stop-motionfilms.-

Svengoolie: Every Saturday night on the MeTV network- 8 pm eastern/pacific, 7 central. Chicago area viewers get an encore of the previous week’s MeTV movie the following Saturday morning on our local channel “The U”.-

Svengoolie: I like the fact that everyone these days- not just kids, but adults as well- seem to enjoy putting on costumes and celebrating. It’s great that Halloween is such a shared experience for so many people- and a special celebration of the scary stuff that’s a part of my life all year long.

Svengoolie sent us some fun pictures to share with you all. He has some very familiar looking fans... 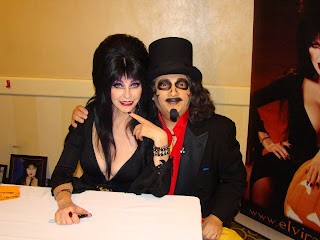 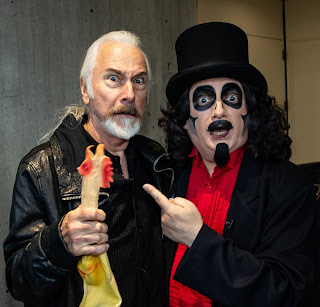 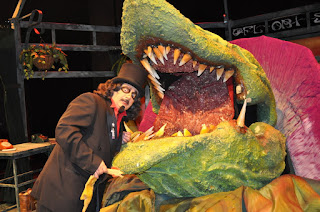 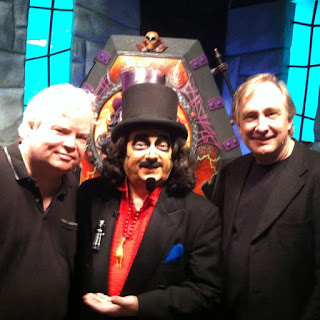 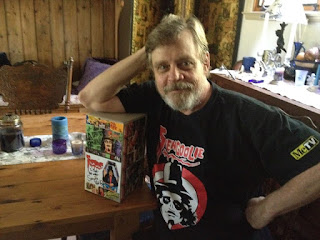 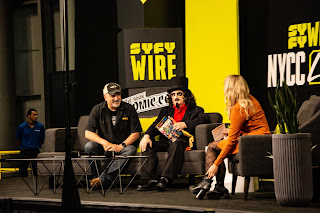 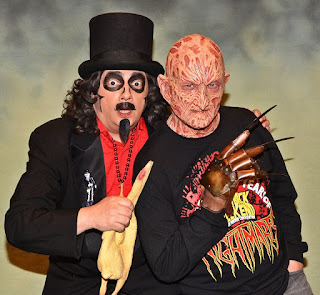 Hopefully you've been following all the great Horror Hosts in our series, and enjoyed them, ranging from up and comers to legendary characters who are  sharing their love for horror, B movies, creature features, sci fi, and the best (or worst) in film. Also, be on the lookout on our social media for an awesome themed giveaway!