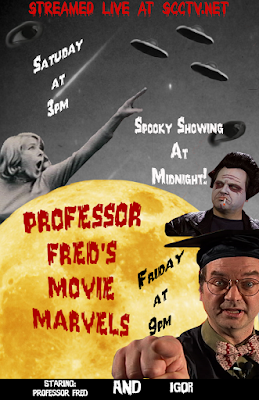 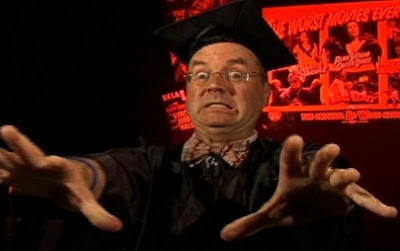 Professor Fred has been hosting 'schlocky films' since the early 2000's in the Seattle area. He has such a knowledge and love for schlock cinema that he's been teaching a college course called "Schlock Cinema 101" at North Seattle College for years!

Professor Fred:  I’ve just always loved monster movies.  And as a kid I always watched “Nightmare Theatre” which was hosted by The Count, who rose from .  This was on KIRO-TV in Seattle at 11:30 every Friday night.  Late night – when you’re a ten or eleven-year old kid, that’s heavy.

Professor Fred: Of course there were horror movie hosts who came before, such as the legendary Zacherley, but The Count was the ghoul for me.  Played by KIRO’s Joe Towey, The Count was so weird and discombobulated!  (I got to work briefly with Joe many years ago.  He was a very cool guy.)

Professor Fred: In the late 1990’s and early 2000’s I was featured weekly on a Friday morning drive-time radio show hosted by Pat Cashman.  My segment consisted of commentary and reviews about schlock movies.  (Years before that I wrote a regular column, Mondo Video, about psychotronic movies in Seattle’s legendary rock music rag “The Rocket”)

In early 2002 I was approached by SCCtv (Seattle Colleges Cable TV) to consider hosting a tv show featuring schlocky films.  I answered the call, and the rest is history.  And the future, too, of course because we’re still producing shows!

Professor Fred: Running a psychotronic video rental and used record store in the late 80’s and early 90’s is one highlight.  It was very cool.  Then-unknown members of Pearl Jam used to come in and hang out.  Mike McCready and Ament, I think.

And of course being the host of “Professor Fred’s Movie Marvels”, working with my multi-talented sidekick, Igor, and bringing more schlock to the world.

Oh, and my radio feature “Am I Boring You?”  airs every Saturday morning at 9:30am on KSER-FM out of Everett, Wa.  You can hear it streamed live at kser.org.  It’s just a three or four minute rant about whatever is bugging me, or delighting me at the time.  Or some discombobulated story from my storied past.

Professor Fred: There are so many – that question is too hard!  As for the show, my favorite is probably the first film we featured back in 2002, “The Terror”.  It’s a Roger Corman film featuring an old Boris Karloff and a young Jack Nicholson.  Throw Corman together with Nicholson and Karloff and you have a very discombobulated brew, indeed.

Professor Fred: “Professor Fred’s Movie Marvels” can be seen on SCCtv every Friday night at 9:00 and midnite, and Saturdays at 3:00pm.  If you live in Seattle, that’s channel 28.  Fortunately, if you live in Poughkeepsie, Timbuktu, Goshen or anywhere else you can still watch SCCtv’s live stream at www.scctv.net.  Each episode is usually followed by an episode of my spin-off interview show “In the Dungeon with Professor Fred”, in which I interview the heroes of schlock.

You can get more info about both shows at: www.moviemarvels.tv.

Professor Fred: Wow.  When I was in my teens the best thing about Halloween was going out and shaking down the little kids, you know, dumping over their little baskets and running away.  Hey, that was the 60’s – a mean time.  No, not really!

Actually, every couple of years I put on a Halloween show where we show a cool, schlock film and my monster band Ramshackle plays live.  We do original monster songs and old rock and roll covers.  We have a cd out called “Ramshackle Meets the Monsters!”  All original, all rockin’, and all completely discombobulated.

Check out this video from Professor Fred's band, Ramshackle, paying tribute to classic horror icon Lionel Atwill along with another fun promo image from the Professor: 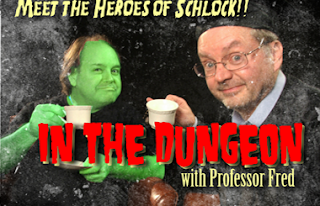 Stay tuned all month long to meet some more great Horror Hosts, ranging from up and comers to legendary characters, sharing their love for horror, B movies, creature features, sci fi, and the best (or worst) in film.

Be sure to read and share all the Horror Host profiles, and share them with the hashtags #ComicBookSwapMeet and #HorrorHost to be entered to win our Horror Host themed prize pack!