As most of you know, I am a life long pro wrestling fan. Most of my earliest memories are of watching the Star Wars movoes over and over, and watching as much wrestling from around the world as I was able to get my hands on.

Through my lifetime, wrestling has always gone hand in hand with popular culture. Think back to the early days of MTV and the WWE (then the WWF) crossing over, and the celebrity guests the McMahon's always booked to appear at events like Wrestlemania.

Wrestling and pop culture are even more intertwined, with many performers croasing over into movies and music. There's also a bunch or really good comic books based on pro wrestling now too. Dig back in our archives and check out some reviews.

There's a new project that really intrigues me about the wrestling business, which I believe should appeal to wrestling fans and non fans alike called '350 Days'.

'350 Days', is a documentary about a side of the wrestling biz we don't all see. It's about the day in day out life of a pro wrestler, as told by some of the greatest legends of the squared circle. Names like Bret Hart, Greg Valentine, JJ Dillon, Lex Luger, and dozens more shared their behind the scenes stories of life on the road and more with the film makers.

I had the opportunity to chat with one of the producers of '350 Days', Evan Ginzburg about the film and its nationwide one noght only release on July 12th (through Fathom Entertainment). Mr Ginzburg is a radio host, lifelong wrestling fan and producer of the Academy Award nominated film, 'The Wrestler'.

Check out our Q&A and please do yourself a favor and see '350 Days' on July 12th! I'll post links to find the nearest screening...

TheSteveStrout: What is the message or point being '350 Days' film makers are trying to relay through this film? 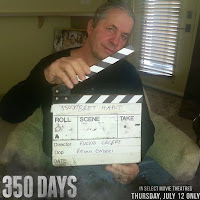 Evan Ginzburg: The message is that during the Hulkamania/Rock & Wrestling heyday these men and women wrestled up to 350 days a year and sacrificed mightily to entertain us. They sacrificed their bodies. They were away from their wives and kids. They weren't home for the holidays or to see their children born or get married or whatnot. They were in constant pain and in a state of exhaustion. We loved it, but it wasn't always an easy life for them, being on the road.

TheSteveStrout: Theres the national special debut/screening (via Fathom ) on July 12th. Whats the next step for distribution for '350' for anyone who can't make the special screenings? Certain markets? Streaming? DVD/blue ray releases?
Evan Ginzburg: Future plans for the film will be announced in the Fall. Right now we urge folk to attend the one night only Fathom screening. 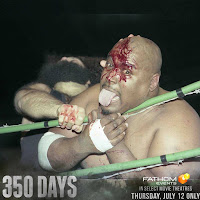 TheSteveStrout: How did you personally get involved with the movie?

Evan Ginzburg: I was Associate Producer on The Wrestler with Mickey Rourke. Over the years I turned down various wrestling projects but when the Executive Producers pitched me this I sensed they loved the business and also wanted to tell these amazing stories. They lived a rock star like lifestyle, saw the world on the promoter's dime and had amazing experiences while performing their Art. But they also paid the price in various ways. And with a top notch editor in Michael Burlingame who worked with Paul McCartney, Mariah Carey, Sting (the singer), HBO, etc. NOT being a "wrestling guy" I knew he'd find the most powerful, poignant content from our over 120 hours of footage and hone it into something that would move an audience. And it does.

TheSteveStrout: You , being a lifelong wrestling fan, must have a personal attachment to the movie. What does it mean to you as not only a producer, but a fan, to see these stories shared?

Evan Ginzburg: Amazingly, about a dozen of these legends have passed since we filmed this. Off the top of my head, George "The Animal" Steele, Ox Baker, Superfly Snuka, Angelo Savoldi, Don Fargo, Larry Sharpe, The Wolfman and others. We preserved their stories. In a sense this is oral history, but not a shoot interview. This isn't "Who was the booker in Chattanooga in '72? This is them pouring their cuts and slicing their hearts open for us. I sincerely believe that like The Wrestler, they will be moved by this. 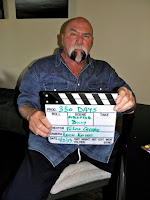 TheSteveStrout: The movie should be an easier sell to pro wrestling fans, but how would you pitch the film to non fans?
Evan Ginzburg: You don't have to be a wrestling fan to love The Wrestler. You don't have to be a boxing fan to love Rocky. In fact in both films theirs only about 15 minutes of wrestling and boxing content. Same here. I can watch a well done documentary on a subject or someone I know nothing about and be totally involved. We told the editor, "Make a movie that'll make an 80 year old woman who never watched wrestling cry." And I think it will. If you love wrestling and these are your childhood heroes like they are mine, even better. We have rare photos and footage and you'll most likely love it. But also bring Granny. And the kids. And don't forget it's one night only.

Be sure to do yourself a favor and get out on July 12th for a screening of '350 Days'. Remember it's one night only, so don't miss it.

Check out the trailer:


Thanks to Evan Ginzburg for taking the time out of his busy promotional schedule to answer a few questions for us. You can check out his radio show at www.villageconnectionradio.com/evan-ginzburg-show, where he talk everything from music to wrestling, featuring lots of great guests.