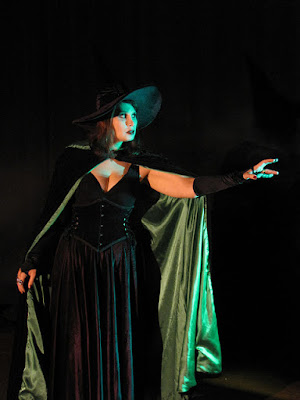 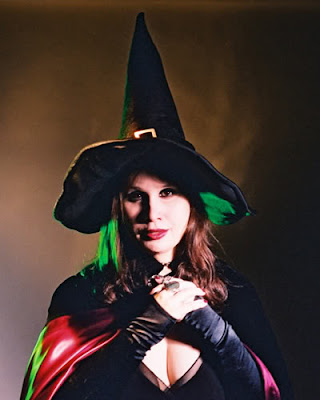 Penny Dreadful is the host of Penny Dreadful's Shilling Shockers. Penny Dreadful has been hosting specials and scary movies for almost 15 years, with no sign of stopping anytime soon. She is a multiple time Rondo Awards 'Horror Host of the Year', and horror host hall of famer! She can be viewed all over the northeast U.S. and now beyond through the Monster Channel (available on Roku and the internet). Special thanks to Rebecca Paiva, show director, for the great photos of Penny Dreadful.

Penny Dreadful: Mainly, it was the disappearance of local programming on Boston-area and Providence-area television. We grew up with shows like 'Creature Double Feature' (which was unhosted for most of its run), 'Willie Whistle', 'Captain Bob' and other local programs. We also had great local hosted horror and sci-fi shows in the 60's and early 70's - 'Feep's Fantasmic Features' and 'Simon's Sanctorum.' I think a big part of it was wanting to create a local TV show. I'm also a lifelong fan of classic horror and I have a background in writing, theatre, and improv comedy, so it all just kind of came together.

We were inspired to start a show by our friends, 'Ghoul A Go-Go.' I was blown away by the fact that they were making the best show on TV out of a cable access studio in Long Island. That really inspired me to go out and make my own show. I found out that a number of horror hosts were using public domain films and creating their own shows on public access, which really got my wheels turning as well.

As for personal inspirations for Penny, I guess she's some vague combination of Barbara Steele in 'Black Sunday', Endora from 'Bewitched' and Stewie from 'Family Guy.' I pulled a lot from classical actors, and the great horror stars I love, but also throwing in some ironic comedy. I love all of the classic horror legends, but also the classic comedy stars. I have so many heroes in both of those genres - Boris Karloff, Bela Lugosi, Vincent Price, the Marx Brothers, Lucille Ball, Carol Burnett, Burns & Allen, Laurel & Hardy, and the list just goes on and on. As far as classic horror hosts, I developed my own persona, but I certainly adore Zacherley, Vampira, Simon, Crematia Mortem, Dr. E. Nick Witty, Ghoulardi, Morgus, Count Gore, and many, many more!


TheSteveStrout: What or how were you introduced to the art of the horror host world? (Yes I consider it an art form) What's your earliest memory of horror hosts? (Personally Elvira was EVRYWHERE when I was a kid, and there was stuff like the Cryptkeeper and late night horror flicks for example...I'm too young to have seen the legends besides through research)

Penny Dreadful: I love Elvira and the Cryptkeeper! However, I don't ever remember seeing Elvira host her show on our local channels, at least not on the ones I got. She was more of a "funny horror personality" who would show up on TV around Halloween, but I never watched 'Movie Macabre' back then, sadly. I have since watched a number of her shows and they are awesome, of course. Growing up, I watched 'Creature Double Feature' but it didn't have a host. It was just a voiceover. The first actual horror host I ever saw was Commander USA aka the late great Jim Hendricks. Ivan Bernier (aka Dr. Manfred Von Bulow from my show) and I went to high school together and we watched Commander USA all the time. He wasn't "local" but he wore a costume, adopted a persona, and showed crazy horror movies - aka - horror host! I also got a VHS tape of 'Zacherley's Horrible Horror' and that was my introduction to Zach, the king of the horror hosts!

Penny Dreadful: We started taping in late 2005 and I remember posting some pics of myself as Penny alongside my snarling darling, Garou, around November or December of that year, but our first show didn't actually air until January 2006. That's when 'Penny Dreadful's Shilling Shockers' premiered.

Penny Dreadful: Mainly meeting so many wonderful people and making so many awesome friends through the convention circuit when we'd do appearances at horror cons!

Being asked by Jason Hignite to speak at the Vampira memorial Tribute at HorrorHound in 2010 was definitely a highlight. I shared the stage with Count Gore for that one, and it was really an amazing weekend - the largest gathering of horror hosts in history, all to pay tribute to the legendary Vampira. That was really amazing.

A big performance highlight that I'd say happened because of Penny was getting to perform with the legendary John Astin in a live stage reading of classic radio dramas! That was thanks to Bob Bowers, a faculty member at Massasoit Community College who happened to be a 'Shilling Shockers' fan and saw me walking around on campus one day. He later asked me (not as Penny, but as Danielle) to be in the 'Radio Classics' show, which was great in and of itself, but he also asked me to play opposite John Astin himself! He was just absolutely charming and wonderful, and I really had a great time doing that show.

Penny Dreadful: Oh gosh. That's a difficult question to answer! I love so many of them!! My personal favorite of all time is 1941 'The Wolf Man'. It was such a tragic story, and the sadness in Chaney's eyes was so haunting. Also, my beloved late husband Magoo Gelehrter (aka Garou) was a werewolf in the show (and possibly in real life - haha) so how could I not pick 'The Wolf Man', really?
As for favorites that I showed on my program, wow, how about - 'Phantom of the Opera', 'Horror Express' 'Nosferatu', 'Black Sunday', 'Horror Hotel'', 'Black Sabbath', 'Metropolis', 'M', 'Cabinet of Dr. Caligari', 'The Ghoul', 'Carry on Screaming' (I know, that's a comedy, but I'll count it)... Should I keep going?

Penny Dreadful: The guaranteed way to see it is to snag the DVDs from our online store (cheap plug): https://www.etsy.com/shop/ShillingShockers

For 10 years, we aired in over 100 cities and towns throughout New England. A lot of those stations still play the show, but I have no idea which ones still do, or when! You can always check your local listings for your cable access channel to see if they carry us.

The best bet is to catch us on The Monster Channel, which is an awesome streaming Roku channel run by the amazingly talented horror host, Halloween Jack! Over there, it's all horror hosts all the time, and they run our old episodes every week: http://eerielatenight.com/

We also have a Vimeo channel where we upload new content such as our annual Halloween specials: https://vimeo.com/297856736

Penny Dreadful: The crisp, cool air as the dead leaves blow around on the sidewalk -- the sight of kids and grownups in Halloween costumes and the eerie visions of creepy monsters, glowing Jack-o'-lanterns, and glorious Halloween decorations -- the smell of candy and burning leaves, and the sound of strange rustling in the trees, and hot apple cider, and 'The Monster Mash', and... everything.


Follow Penny Dreadful on social media at the following:

Enjoy a clip and more photos from Penny Dreadful: 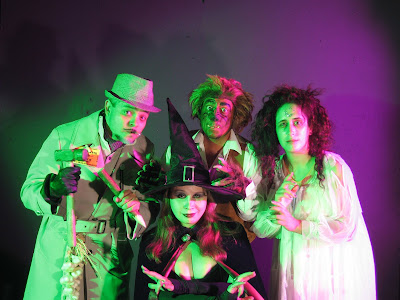 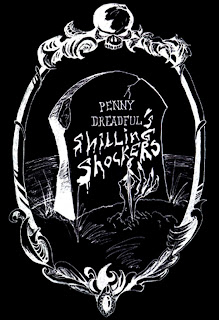 Steve Strout is the media mastermind (haha) behind this site, host of the Comic Book Swap Meet, nerd, terrible artist, gamer, convention goer and comic book reader who spends more time rescuing toys from thrift shops than a normal adult should. He is
Email ThisBlogThis!Share to TwitterShare to FacebookShare to Pinterest
Newer Post Older Post Home