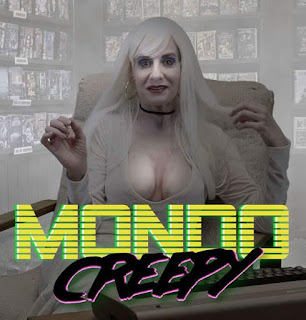 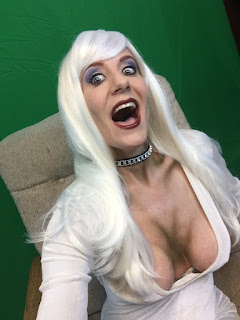 Lilith Von Bloodworth is one of the newest scary movie hosts on the scene. She going to bring us the best and worst in movies from the comfort of her haunted video store with her show, MONDO CREEPY. They aired their first episode recently, featuring one of the most important horror films of all time, Romero's Night Of The Living Dead, with a broadcast full of campy humor and film knowledge reminiscent of horror host legends like The Ghoul and Elvira.


Lilith Von Bloodworth did our Q&A, so read on to learn more about her and the future of her show, MONDO CREEPY!

Lilith Von Bloodworth: The Lilith Von Bloodworth character is a collaboration between myself (Jennifer Welsh) and writer/producer Matt Maisto.  We came up with the idea for the show years ago, but we were both very busy and it was never the right time. However, towards the end of last year, we knew we had to draw a line in the proverbial sand and say “This is the year.” We were determined to do it even if we had to move heaven and earth to make it happen. Luckily the universe kind of aligned itself in the right way and it’s now become a reality.

I would say that our three biggest inspirations for the character are Rhonda Shear from “USA Up All Night”, Joe Bob Briggs, and of course Elvira.

We are based in New Jersey and we were raised here as well. Growing up in the 80’s, there were no local horror hosts here in the state, but as far as television markets go, Jersey is sandwiched between New York and Philly.  Growing up during that time period Zacherley was only intermittently on TV to host the occasional 3D film on WPIX - Channel 11 in New York with special episodes of “Chiller Theatre”.  Since there was a lack of local hosts, our biggest influences came from cable TV and watching shows like USA Up All Night with Rhonda (on Fridays) and Gilbert Gottfried (on Saturdays) when we were teenagers, as well as Joe Bob Briggs “Drive-In Theater”, and renting tapes of Elvira’s “Movie Macabre” at local mom and pop video stores.

The other big inspiration (at least for Matt) comes from his love of locally made television from the 80’s and 90’s. In addition to Channel 11 in New York, there was also WOR – Channel 9, which was the home of such shows as the controversial “Morton Downey Jr. Show”, the risqué kids show “Steampipe Alley” with Mario Cantone, and the legendary “Howard Stern Channel 9 Show”.  You also can’t talk about Jersey television in the 80’s without mentioning the great “Uncle Floyd Show”.

Those are the influences, but we are striving to make the show a spiritual successor of sorts to USA Up All Night by attempting to combine the snark and irreverence of Gilbert with the sex appeal of Rhonda.

The character is covered head-to-toe in white for two reasons… 1) (and I don’t want to offend anyone for saying this) because there are many hosts out there dressed in black and we wanted to do something different that makes her stand out and 2) because we wanted her to be the photo negative of Elvira.  Matt says he got the idea from Mark Millar’s comic book “Nemesis”.

Lilith Von Bloodworth: Our earliest memories of horror hosting are definitely of Zacherley hosting the 3D versions of “Revenge Of The Creature” and “Gorilla At Large” and then learning about Zacherley through our parents who grew up with him.  I also remember quite vividly getting the 3D glasses from Burger King to watch those movies. In Philly during the 80’s there was Stella – The Man Eater From Manayunk on her show “Saturday Night Dead”.  However, we could only watch it on rare occasions because it was on very late at night after “Saturday Night Live”.

Like you said, “Elvira was EVERYWHERE”, and seeing her in commercials and TV appearances is what led to us renting tapes of “Movie Macabre”. Of course, then her movie “Mistress Of The Dark” came out when we were a bit older, so there was always an awareness of Elvira from an early age.

Lilith Von Bloodworth: We started releasing short teaser clips of the show to introduce the character back in February to generate interest shortly after we had done our first round of shooting, but then we scrapped everything from that shoot and started over – which is why the show didn’t officially air until this past August.

Lilith Von Bloodworth: There haven’t been too many highlights – we’re currently working on our second episode, but I get a little thrill when someone asks for an autograph.  A few months ago someone sent me a message and asked for one for his ten year-old daughter. I have a feeling it was really for him. LOL. Our show isn’t exactly family-friendly.

TheSteveStrout: What is your personal favorite horror or sci-fi movie, and favorite that you've had the opportunity to host on your show?

Lilith Von Bloodworth: My favorite horror film is The Thing, but it was a real pleasure to host Night Of The Living Dead on our first episode.  That was by choice because… 1) We knew the best way to get eyes on the show was to host a film that had name recognition, and… 2) It’s one of our all-time favorite films.  I think it’s important that viewers going forward should know that most of the films we will show will not be as good as NOTLD - quite the opposite, in fact.  The movie in our second episode, which will be out some time on October, is actually kind of a delightful mess. Hopefully, we will show films that a lot of people haven’t seen. We are also very open to hosting films by current filmmakers.

Currently, you can find us on our YouTube channel - https://www.youtube.com/c/mondocreepytv, but there might be some other avenues in the future that we’re not quite ready to reveal just yet.  We can also be reached at mondocreepytv@gmail.com if you would like to discuss other opportunities for the show.

What’s not to like about Halloween? Costumes, decorations, horror movies on TV, haunted houses, parties, and candy.  That is, except for “fun sized” candy.  There’s nothing fun about “fun sized” anything.

Follow Mondo Creepy on social media at the following:


Enjoy a clip and more photos from Lilith Von Bloodworth 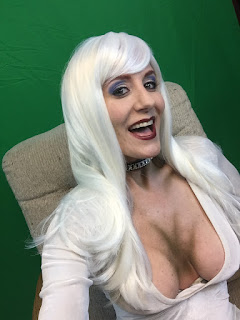 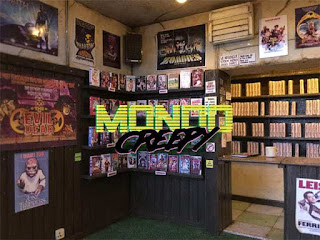 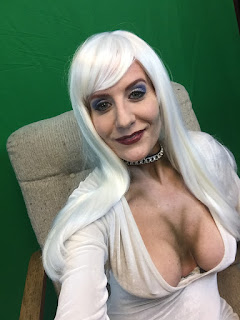