With Punk Mambo being one of our favorite new comics, and personally not knowing much about the characters past, I felt obliged to get a bit of insight on the series from the writer, Cullen Bunn.

Cullen is one of the busiest writers in comics today, having worked on titles such as Deadpool, and Pumpkinhead (which happens to be illustrated by Comic Book Swap Meet guest Blacky Shepherd) so it was a treat that he took the time for us.

Before delving in to our Q&A, we have someteasers from Punk Mambo #2 for you to Check out, via Valiant Entertainment... 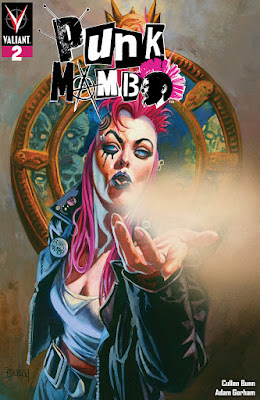 In issue 2 Punk Mambo faces off with Uncle Gunnysack, a demon who's been abducting loa's, or voodoo spirits. Let's see what kind of mystical scraps she gets into in the second issue of five.


With all the nice reviews and acclaim so far after only one issue being released, I checked in with Valiant's Editorial director, Robert Myers about the possibility of it becoming an ongoing series, and he says, "Punk Mambo is an incredible character, and I’m very excited for the reception that Cullen and Adam’s first issue received. Cullen certainly has more Punk Mambo stories to tell; I’d love to see them. If the fans demand it, we’ll have no choice!"

Pre-order it because This one is gonna fly off the shelves. 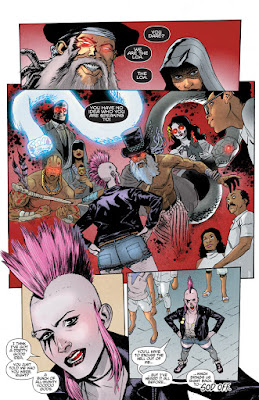 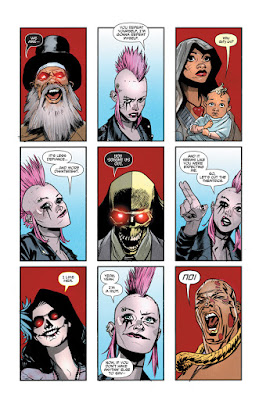 Pre-order it because This one is gonna fly off the shelves.. Now dig in to the Q&A.

thestevetrout: Who came up with the character(s) in Punk Mambo?

CULLEN BUNN: I believe Punk Mambo was created by Peter Milligan and Roberto de la Torre in the SHADOWMAN book. But, if I’m being honest, I really wanted to treat Punk as a creator-owned character and do my own thing with her. Obviously, I want to honor what has come before, but there were times while writing this when I almost convinced myself that I was the only person who had ever written the character! Now, there are other characters who appear in this series for the first time. The villain is a new character for the Valiant Universe, and I think he’ll present a unique threat going forward. Marie Laveau was a real-world Voodoo priestess, and she appears in this series and has a big role to play. Also, we’re introducing a pantheon of Voodoo “gods” to the world. While one of them—Baron Samedi—has appeared before, the others are new…or are at least being presented in a new light!

thestevetrout: What were some inspirations in developing such a unique hero?

BUNN: I read a lot of occult detective stories. Of course, since I’m a comic fan, that brings Vertigo’s Hellblazer to mind, and that’s absolutely a source of inspiration, but I’m also talking about occult detectives in prose, such as Dresden of The Dresden Files, Sandman Slim, John Taylor from the Nightside series, Felix Castor from The Devil You Know, Sonja Blue from Sunglasses After Dark, and so, so many more. I thought it would be great to give the Valiant Universe a character that fits into that mold and who could go on any number of wild, scary, thrilling adventures. I definitely wanted to lean into the grand tradition of badass occult detectives with loads and loads of issues, so here we go!

thestevetrout: Did you do much research into stuff like Voodoo lore while developing Punk Mambo?

BUNN: I did! Well... I did enough research to make me dangerous! I wanted Punk Mambo’s world of magic to feel unique and different. I wanted he rituals and spells to have a unique flair. And I wanted the world she’s adventuring in to feel authentic. I had already done quite a bit of research on my own. I’ve taken a few trips to New Orleans, and while there I always dig into Voodoo lore. But I didn’t want to get so bogged down in realism that it wasn’t exciting for the comic. I mean, this is a superhero universe. So, I also leaned heavily into the cinematic aspects of Voodoo, too.

thestevestrout: Do you feel more pressure telling a full story in a miniseries like this, versus an ongoing book where you can develop and grow over time?

BUNN: Not necessarily. It’s nice to know from the outset that you have five issues for the story. Sometimes, ongoing series don’t last as long as you would like, and if you’re not careful, you end up scrambling to tie up all your long-term plans over the course of a single issue! Now, that’s pressure! With this, I was able to plan for the beginning, middle, and end straight away. I know readers will get a satisfying story. My hope, of course, is that readers like this so much that we come back for another series! There’s plenty more adventures for Punk Mambo to have!

thestevestrout: With him being such a brilliant artist, how easy was the working relationship with Adam Gorham, and how well did he portray your vision for Punk Mambo?

BUNN: Working with Adam is a breeze! He elevates every script in such fantastic ways. I think he portrays Punk Mambo perfectly—beautiful, gritty, tough, dirty, and scary. He brings it all to the page!

Thanks again for the time, Cullen!

Thanks for visiting, and don't forget to follow us on all of our social media outlets including our Facebook Comic Book Swap Meet page HERE