Cool Projects #18 brings us a fun Y.A. comic and , check it out and share away! 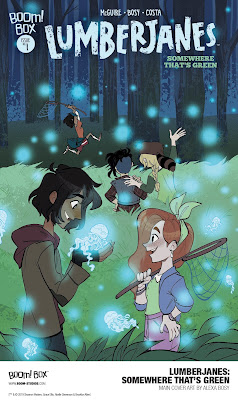 In this issue the Janes, having a case of cabin fever after being rained in at camp, hear what sounds like lost kittens. The Janes set out to reunite them with their mother, only to end up stuck a new secret part of their universe, described as a "green haven full of magical and wondrous plants".  This adventure calls for them to uses their friendship and smarts to get out of the situation.

Though I haven't read any of the Lumberjanes series, based on Boom!'s preview I can see how the series is so well received. It seems like a great title for younger comic readers who like an adventure. It also helps that the writing is fun, in the sense that you feel like you're literally listening to adoloscent kids in the real world.  Some scripts can feel over written and this just has a real vibe.  Seanan McGuire really finds the voice of the youth. That combined with Alexa Bosy's bold, colorful art makes for a great, fun comic...as comic books were meant to be.

Though its a Y.A. series, I may search out some to read myself, when I'm in the mood for a lighthearted comic. This issue hits stores May 29th from Boom! Studios. More info can be found at www.boom-studios.com 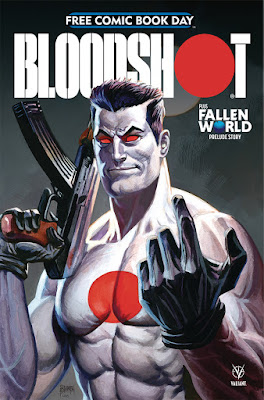 Since this weekend is Free Comic Book Day, which I posted about recently HERE, I figure why not share a few preview pages of Valiant's arguably most popular (and dangerous) character, Bloodshot and their FCBD special Bloodshot issue...I might mention will also lead in to the new series by Tim Seeley later this year.  I love this artwork! 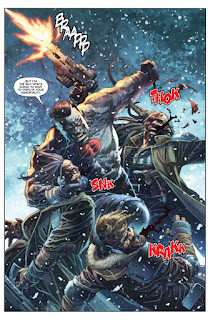 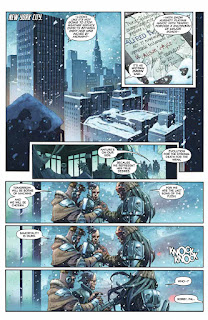 This looks epic, and gets me excited for the Bloodshot movie next year!

Are you going to check out these comics, or have you already been into these series'? Where's a good place for new readers to jump in to the titles?

Be sure to keep us in the loop on any exciting new projects that we should cover, whether it be comics, games, movies or whatever piques ypur interest. I'm always open to new contributors and guest posters here at thestevestrout.com. Wanna join the fun? Hit us up on Twitter at @thestevestrout and at www.facebook.com/ComicBookSwapMeet!