Dig in to Cool Projects #19! We think you'll dig these ones, and if you do, SHARE AWAY! 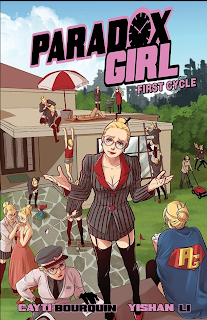 Top Cow Comics will be releasing Paradox Girl Vol. 1, collecting the first 6 issues of the series, on May 29th. Paradox Girl is a hero like we've never seen before having the ability to teleport through time accurately to moments, without causing rifts in the universal continuity.

She uses the ability to help her sidekick Axiom Man solve issues and defeat enemies (like a kaiju and a wild wolverine), when she isn't distracted with fighting herself.

I'm a couple issues in to reading this amusing take on superhero comics, and can see creators Cayti Elle Bourquin and Yishan Li taking Paradox Girl into the future. Be sure to ask your local comic retailer to stock Paradox Girl Vol. 1 or order it via Top Cow Comics at topcow.com/paradox. 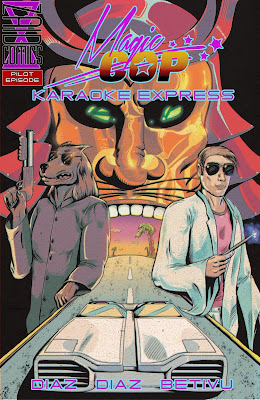 Indie comic creators and sibling team up of Brandon and Phillip Diaz, along with colorist Eugene Betivu, bring us Magic Cop via their Zaid Comics imprint.

You can check out a preview issue of this comic, which Magic Cop writer Phillip Diaz describes as "Miami Vice meets Halloween Town", via their website at www.zaidcomics.com.

I grabbed a copy of the Magic Cop preview, and found myself sucked right in to this new twist on a police drama. This world, set in the city of Ambrosia, jumps right into an interrogation scene where Iggy Cromwell, the Magic Cop, is trying to get info from what seems to be a demon gangster who won't sell out his boss...Leading Magic Cop to use his powers to get his info, and get on the case, and on the chase for the criminal mastermind known as Daimyo Kui.

Though the preview is short, it playwd out like a good movie trailer, and there is just enough story to leave me wanting to read more. In my opinion, that is what a good. comic book story should do. Isn't it?
The full graphic novel, which is in the works will bring us, as Phillip Diaz explains, "the story of Magic Cop as he learns to work with his wolfman partner on the case of a the murder of a mermaid hooker". Ummm, yes please! I'm intrigued.

Did I mention you can read the Magic Cop preview for free by signing up for their email list at zaidcomics.com? Go check it out.

Before wrapping this edition of "Cool Projects", I wanna drop the link for this Kickstarter. 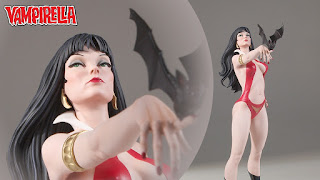 This year marks the 50th anniversary of the Vampirella character. There are a bunch of great works being released in celebration of her 50 years, with this campaign for artist Jose Gonzales' amazing sculpture being one of the coolest. I think it looks amazing and would be worth contrubuting to, especially with these awesome rewards available...check it out:
https://www.kickstarter.com/projects/dynamiteent/vampirella-50th-anniversary-statue-by-jose-gonzale

As always, thanks for reading, and if you have a "Cool Project" you think we would dig, or if you would like to contribute to the site whether it be a review, cpnvention coverage, commentary, or anything that might interest our audience, drop a line. Let's chat!