review by Joe David Thompson
The day has finally arrived...the new Thor #1, and along with it, someone new wielding Mjolnir.

Let's put aside the fanboy controversy for a moment and ask the most pertinent question here: is the book any good? 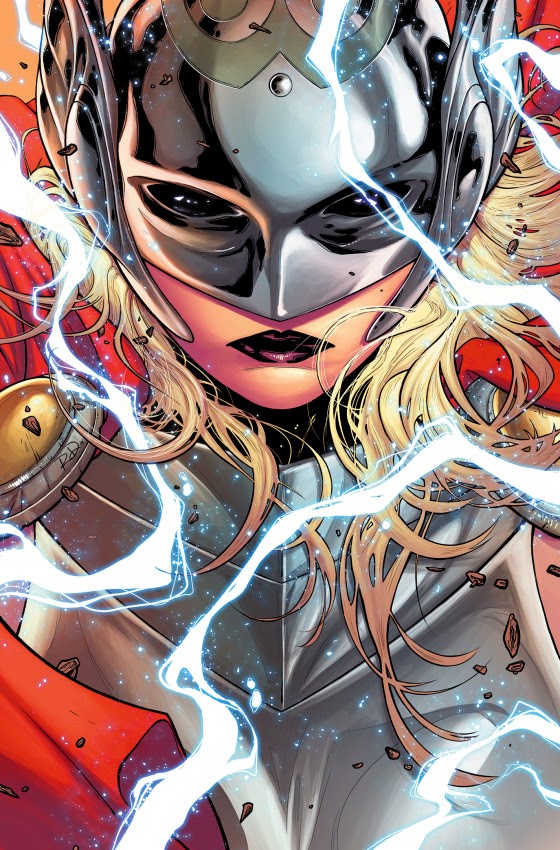 Fret not, because this new book is better than just good.  Jason Aaron, who's run on Thor is bound to be mentioned alongside the word "epic," delivers the next step in his plans for the character with an excellent amount of both restraint and style.  Aaron balances the action, and there's plenty of it as Malekith leads a Frost Giant attack on an underwater base, with intricate character work between Thor and his parents.

In fact, Aaron is putting the heat to Thor, who's already nearly catatonic over losing the ability to lift his hammer after Nick Fury whispered something secret into his ears.  In its heart, the story is really about what it means to be worthy to be called a god or a hero.  Does lifting a hammer define who Thor is inside?  Thor is reduced to a whimpering shell, pleading with Mjolnir to be lifted, yet no one, not even the returned Odin can do the job.  News of Malekith's offense spurs Thor into action, presumably to prove the hammer doesn't make the man, and we get a spectacular fight sequence with a shocking end.

Aaron also plays up the gender roles as the All Mother, left in charge of Asgardia in Odin's absence, spars as her husband tries to resume his rule as though nothing has changed.  It's a great way to address the issues that accompany the arrival of our new female Thor, or who at least wields the power of Thor, who makes only a mere cameo in the final pages.  Where no one else could lift Mjolnir, this mysterious woman is able, again pressing the question of what makes one worthy.

Russell Dauterman's art is nothing short of captivating here.  The action sequences are fluid and grand.  Elsewhere, scenes of long conversations are rendered engaging by his character work and their expressions.  This book looks great.

I know there's some who think this a gimmick, a marketing ploy, or worse, but it comes off like a welcome breath of fresh air for the character and an exciting new direction.  Not once does the writing reflect these charges.  Aaron's script comes off like a Thor superfan who is given the opportunity to add an exciting new chapter to the character's history.  Don’t miss out on this.  Don't listen to the haters or the ridiculous outrage...this looks to be a kick ass new Thor!