Review by Joe David Thompson
The Bat-Universe is cranking out some great new comics over the past few weeks.

Joining the refreshing new direction for Batgirl in issue #3 and the cool vibes in the new Gotham Academy, we get the first issue of Arkham Manor this week, from the creative team of Gerry Duggan, Shawn Crystal, Dave McCaig, and Travis Lanham.  When I first learned of the premise, I thought the conceit sounded a bit silly, but after the execution, I'm on board enough to come back for the next episode. 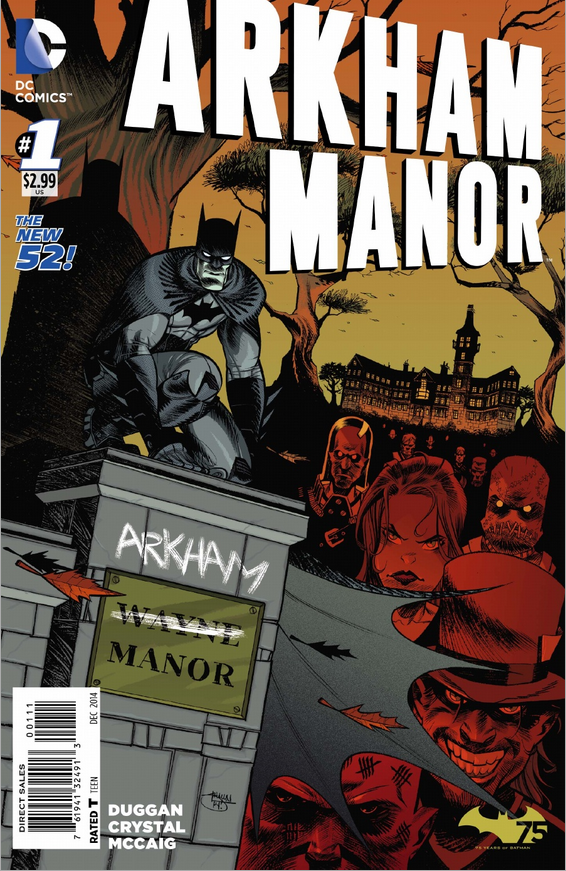 After the quite literal fall of Arkham Asylum, the government of Gotham City is in dire need of a place to house the city's most undesirable criminals and violent head cases.  Using an outdoor stadium as a stop gap measure is a band aid that quickly anger's the public, so the mayor turns his eye to the recently vacated Wayne Manor.  Pulling the strings of imminent domain, Gotham acquires the former Wayne grounds and fills it with these patients, dubbing the project Arkham Manor.  But there's a catch:  the Bat-Cave is still underneath the grounds and fully operational.  When grisly murders strike Arkham in its first few days, the world's greatest detective sets out to find the killer...by going undercover.

So, Arkham Asylum is probably as good of a first issue as you could get.  Duggan hits all the right notes, whether he's landing the gruesome tone or tossing out ideas that could be turned into series' of their own.  I especially like the idea of Batman creating his own prison deep in the cave for his most potent foes.  Duggan also picks up on some of the more personal traits of Bruce, both as the man and the Batman, as he reminisces about the history of his home, or the hint of spoiled child when it finally occurs to him that the manor was Alfred's home as well.  It all adds up to some humanizing layers for Bruce's character that often get lost in the bigger action.  This is a great thing, mainly because by the closing page, we get the idea that Arkham Manor might just be a Batman book minus the Batman, or at least, Batman as action hero.  Batman as detective is presented with a classic "locked door" mystery on his home turf.

Shawn Crystal's artwork creates the mystery and gloom of the book's tone wonderfully.  His take on Batman is often one that magnifies his physical side.  We are continuously looking up at him, cut with sharp features and, of course, the muscular physique.  There's plenty of shadows and movement, all of which adds to the building of the world of Gotham, and more importantly, the manor itself, sure to be a claustrophobic setting as the book progresses.

Joe David Thompson has been doing media reviews for websites such as Red Carpet Crash and the 405 Music Blog. For any questions or comments for Joe David Thompson, you can email him at jovid52@me.com and follow him on twitter @jovid52