I wanted to post a quick shout out to the Port Townsend Film Festival, and share some of my highlights with you fine folks.

First off, with all the events, conventions and festivals I've attended over the years, I like to think that I have a pretty good knowledge of what does or doesn't work, and whether or not there's a lack of organization to the event. In the case of the Port Townsend Film Festival, they bring a level of excellence that exceeds a good majority of "shows" I have been too.

They pack little ol' Port Townsend with 3 days of world class cinema without a hitch. Thousands of film buffs line up for over 100 movies, documentaries, and short films over the weekend at multiple theaters, but these lines run smoothly. I've gone through disorganized waits for events, concerts and meet and greets with disorganized smaller crowds, but the Port Townsend Film Festival crew has it under control, cutting off lines as necessary and constantly communicating with patrons, putting everyone at ease. That gave us more time to chit chat about our favorite festival movies and moments with our neighbors in lines. I really enjoyed talking with and learning from some really knowledgeable movie fans.

Therefore, I'd like to commend the Port Townsend Film Fest for running a fantastic event, full of top notch programming.

As for my personal highlights...

I managed to get in a couple feature films, and a collection of short films that were highly entertaining. I'm not a movie critic, or consider myself a great movie reviewer but I want to mention the movies I DID see. 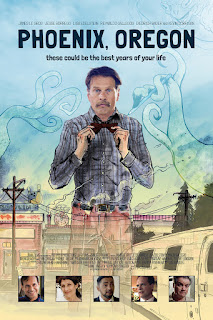 My first movie of the weekend, I mentioned in an earlier post, when I interviewed filmmaker Gary Lundgren about his submission to the festival, a really funny movie called Phoenix, Oregon.

Those of you who follow Twitter feed (@thestevestrout) probably caught my funny comment about Phoenix, Oregon "Having everything a movie should have in Pizza, Beer, and Bowling", but in all seriousness, this was a touching and at times hilarious story of taking risks in life, or missing opportunities.

Mr. Lundgren put together a stellar cast including Lisa Edelstein, Diedrich Bader, and Kevin Corrigan (who's character had me crying with laughter), to tell his story of a down on his luck, aspiring graphic novelist (played by James LeGros) investing in a bowling alley, which opens the door to his bigger dreams through new connections and failures. Sounds vague, but I'm not spoiling it for you. I think you should track it down and see Phoenix, Oregon when its released in April, according to Gary and his producer/wife Anne.

I really liked this movie, and look forward to more projects from the Lundgrens, who by the way, were both really cool, humble people. I'm really glad I stumbled across their movie and see big things for them very soon! https://m.facebook.com/phoenixoregonmovie/ 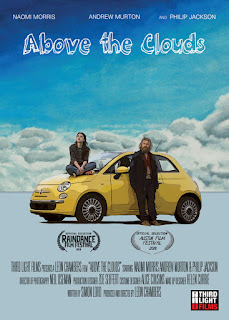 Another great movie from the Port Townsend Film Festival (or the PTFF) was Above The Clouds, from the UK. This great narrative tells the story of a young woman named Charlie who learns on her 18th birthday that father she knows, isn't her biological dad.  She sets out on a road trip to meet him, though the real story is the bond she makes with a homeless man, Oz, whom she brought along to act as her "responsible adult" due to her not having a driver's license.

I left this movie with two emotions. One feeling good in the fact that you can indeed find good and friendship in people that are different from us. The biggest thing that stood out is the performances by the co-stars, Naomi Morris (Charlie) and Andrew Murton (Oz). They were phenomenal in their roles. I was quite pleased to hear that Naomi got the best actress honors at the PTFF. It was a well deserved honor. I really enjoyed Above The Clouds. Learn more about the movie at http://www.abovethecloudsfilm.co.uk/

The PTFF usually has a special guest or two and this year's, Stephen Tobolowsky, was extra special, as I'm personally a fan. Mr. Tobolowsky is one of the premier character actors today, and being able to mingle with with was pretty awesome.

He drew quite a crowd for a screening of his fantastic performance movie, Primary Instincts, followed by a Q&A panel.

After the panel, is where my weekend highlight happened.
Mr. Tobolowsky hung around after to chat and meet fans, and as a collector of signed memorabilia, I brought along my copy of Spaceballs to get autographed. He was very happy to sign and take a selfie with me, because I'm an fan before a "so called journalist".

I headed out and remembered I had a question I wanted to ask Stephen about his un-aired role on the Buffy the Vampire Slayer series. He told me the reason the show didnt happen for him, so I thanked him again and introduced myself. His reaction kinda blew my mind!

He got really excited, and said, "You're THESTEVESTROUT!? I had a classmate with a similar name so I've been following your stuff! I need a selfie with you!". Stephen Tobolowsky knew my name. He had heard of this little old website! How cool was that? I'm here to appreciate his work, and he knew of me. I'm still kind of beaming from the interaction. Such a nice guy, who made everyone feel like an old friend. Thanks, Stephen Tobolowsky!

I need to add that his Primary Instincts film is an amazing piece of storytelling. So real, and relatable in many ways. I highly recommend checking it out. I believe its available on Amazon right now. Be ready to get all the feels though.

Overall the PTFF was a great experience. Besides the great stories I enjoyed there were so many other movies of which I heard chatter around town about. Great narratives and brilliant documentaries galore. If you are a movie lover, try attending the Port Townsend Film Festival at some point. It's a wonderful event in a beautiful little city. Here's a couple other pics from around the festival:
Follow the Port Townsend Film Festival on their website for the latest on next years festival, as well as other events throughout the year https://www.ptfilmfest.com/

Though this post topic couldn't be further from horror films, it is about movies, so before closing this out, I'd like to mention the sad passing of a great performer and horror movie icon, Sid Haig.

This one hit close to home for me as a fan of scary movies and because a meet and greet with him years back helped me over nervousness when interacting with personalities and helped me get serious about this site. Mr. Haig was just genuine and personable with every fan, showing us that were all human, and though some have celebrity status. He played scary really well, but he was a sweet soul, great actor and will be remembered always for it. Rest well, Sid.