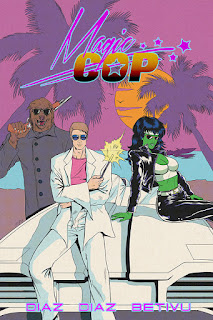 Time for another Cool Projects article, but first we wanna congratulate our friends at Zaid Comics on their successful crowdfunding effort for their Magic Cop graphic novel. They surpassed their goals Great job guys. Its gonna be a fun comic.

Check it out HERE if you missed our recent post about Magic Cop...AND...you can still check out their free teaser issue at http://zaidcomics.com/pilot/cover.htm 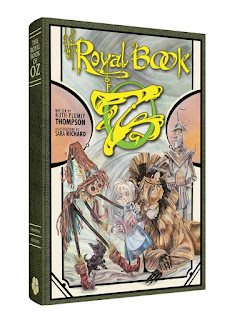 The book will contain Oz maps, and six new illustrations by Eisner Award nominated artist, Sara Richard. Oz historian Eric Shanower, an Eisner Award winning writer and artist, is providing an afterword that provides biographical information on Thompson and an overview of how she came to write the book, according to Clover Press.

Clover Press recently signed a deal with Diamond Distributors, which should boost the sales. Clover Press is headed by IDW founders Ted Adams and Robbie Robbins. For more info head over to ww.cloverpress.us.

With Halloween right around the corner, I want to do some fitting posts, so this next Cool Project is one of our own...

Some of my early memories, were of staying up late on the weekends and watching the late night creature features, hosted by over the top characters known as Horror Hosts, which is probably a big part of my love for horror films.

There were icons like Elvira, who was EVERYWHERE in the early to mid 80s. Joe Bob Briggs' Monster Vision, the Tales From The Crypt's Cryptkeeper, and the cult classics from Troma with the introductions from Lloyd Kaufman even fit the mold.

Before that, there were regional Horror Hosts, who were local celebrities who created amazing spooky characters to host the monster movies, with fun monologues and silly sketches. It was all so campy, and I loved it. I only wish I was around in the heyday of characters like The Ghoul, Vampira, Zacherly, and the original Svengoolie, who date back as far as the late 50s. Then, all of a sudden, they all were gone.

If you're not familiar with the Horror Hosted shows, check out this article from Mental Floss: http://mentalfloss.com/article/29034/schlock-jocks-12-tv%E2%80%99s-coolest-horror-hosts. It's a pretty cool article...back to my project...

A couple kind of stuck around. The Ghoul hung out until the 90s. Elvira and Joe Bob Briggs have been making appearances on the horror convention scene for years. The original Svengoolie passed the torch to the current Svengoolie, who has been performing the character off and on for 40 years now.

Over the last few years, especially since the internet has taken over, there has been a resurgence of the Horror Host genre, which I couldn't be happier about!

Brings me back to my Halloween project  idea. We are going to be posting a series of profiles on a handful of the new crop of horror hosts, including characters like The Bone Jangler, who had been one of the biggest advocates of the art of the Horror Host, Lamia the Vampire hostess of the Horror Hotel, and one of the most popular faces on the scene, Mr. Lobo. There will be a few more new faces, and hopefully a couple legends. Each profile will feature a brief Q&A I'm putting together for the performers, and will include some pictures, probably a clip from their show, and details on where you can view them and follow their social media.

I'm really excited about this project, as I'm a big fan and supporter of this Horror Host revival. I hope you guys dig it. Its early in the works, but stay tuned. I will keep you all in the loop.

Don't forget...We still wanna share your favorite nerdy establishments, so if you wanna do a guest post about a comic shop, game store, anime shop, arcade, or any nerdy establishment that you feel everyone should know about, get in touch.