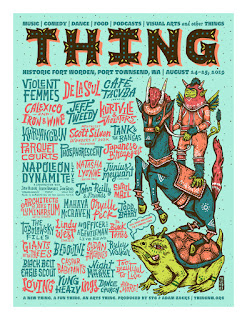 The Thing music and arts festival had its inaugural event over this past weekend, August 24th and 25th right here in my neck of the woods at Fort Worden, a former early 1900s military base in Port Townsend, Washington. Sadly, due to family emergency I was only free to cover Sunday at THING, but I managed to pack a lot into my abbreviated visit.

Some of my own highlights included seeing and chatting with one of my personal favorite stand up comedians, the aforementioned Todd Barry. Todd is a NYC based comic known for his dry humor and soft spoken demeanor that always delivers non stop laughter with his edgy and observant joke telling. If you're not familiar with his stuff, I recommend checking out his recent Netflix special.

Another thing that was extra cool for me was a performance by Giants In The Trees featuring Krist Novaselic, a founding member of rock and roll hall of famers, Nirvana. Giants In The Trees brought a really rocking blend of Americana with just a touch of a punky vibe that really worked.  They're definitely an act I'm going to try and see again!

There was so much to see and do. I wish I had more time to take in more of the festival! Check out a few pictures, including a couple more shots from Giants in the Trees' set:

The organizers of THING really really utilized the space at historic Fort Worden really well, laying out the stages and venues as to not feel over crowded as some festivals could, which was quite appealing and pleasant having been to countless events. Overall, I'd say THING was pretty successful. A great family friendly weekend with great food, great music, and great times for all.

I have to add that although there was a bit of worry by the local residents about the impact on the region, THING Festival has come and gone, with minimal negative impact on this small community. Hopefully that leaves the door open for a return next year, along with other similar events in the area. I'm inspired to plan my own next big event...I believe this is the next big THING (pun very much intended)

We're glad we got to check out THING! Thanks to STG (www.stgpresents.org) for the opportunity to cover the event.