Were back with another Cool Projects article, featuring another great book from Valiant Comics and a crowdfunded comic that will have you feeling nostalgic for the books from the 80s and 90s! 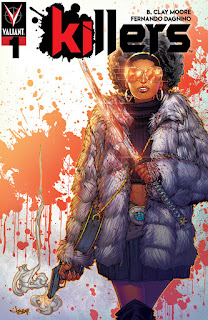 This past week (July 31st) Valiant Comics released the first issues of Killers. Killers #1 is action packed right from the get go.

A series of retired ninja assassins are summoned by their mysterious sensei, Jonin back into the ninja operative life...but why? We will most definitely find out in the coming issues of this 5 book mini series, based on Valiants Ninjak comics. This looks like it's going to be a fun one.

The creative team of writer B. Clay Moore, with Fernando Dagnino doing the art, really tell this tale of this secret ninja organization perfectly. Check out Killers #1 from Valiant Comics.

And while on the topic of fun comics...I really think you guys will dig this indie comic in the crowdfunding stage. 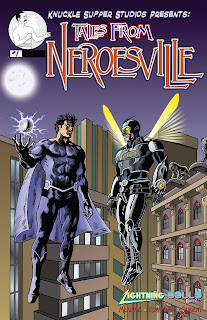 Knuckle Supper Studios brings us Tales From Neroesville. Tales From Neroesville or TFN, brings us a universe full of superheroes, but issue one focuses on a pair of underdog heroes (Maybe less underdog, than underperformers), Airball and Lightning Doug featuring the creative team of D Jason Meadows, Andi Kurniawan, and Randy Sargent.

The two bumbling heroes start TFN issue 1 being outsmarted by a petty criminal, to be saved by a real superhero...who tips them off to a secret shindig for heros, which they weren't invited leading them to sneaking in to the party.

Tales From Neroesville is a very well put together comic, with some great art and straightforward dialogue. It reminds me of comics right our of the earlier days of Image Comics, with an abundance of over the top characters, put together with some great classic comic book art. This is really funny stuff, but really made me want to get to the next issue.

I think TFN would be a good project to support, especially if you love superheroes and have a sense of humor. It really brought to mind a 90s film called The Specials (from James Gunn). I'm definitely enjoying what I've seen.
Check out the Indiegogo campaign at https://www.indiegogo.com/projects/tales-from-neroesville-issues-1-2-and-3?fbclid=IwAR19izj_wFvtojZ6-tnQ_bB01PsZSxIVcNTEQeEeR72I06e1MEt70XtOsQ0