Our buddy Jesse Daniel sent us in a summary of his San Diego Comic Con experience this year including some great con going pointers. He a veteran so he knows what's up...check out and share Jesse's recap, and give him a follow on Instagram... www.instagram.com/the7thcandidate

The Return of the King: Attending the 50th San Diego Comic-Con 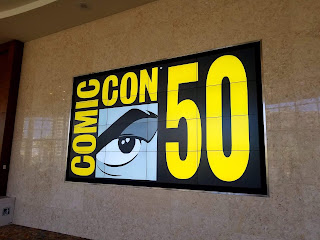 There's a certain sense of anticipation one feels when approaching the San Diego Convention Center from across Harbor Drive; seeing the infamous San Diego Comic-Con eye logo staring down at you from the many banners surrounding the venue, witnessing as the giant posters begin to decorate the many hotels that are adjacent, watching crews assembling offsite events that will be alive with patrons in only a few short days.

But that sense of anticipation is dwarfed in comparison to the feeling one has when approaching the same location within a throng of nerds and cosplayers, backpacks across shoulders and badges around necks, anxious to begin the four day event we have all been waiting for. 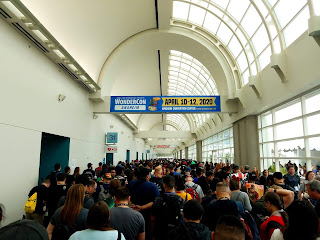 SDCC 2019 officially kicked off on Wednesday, July 17, with Preview Night, in which select badge holders can access the show floor for three hours before the actual convention, followed by four days of offsites, programming, and sleep deprivation. 2019 marked the 50th SDCC, not to be confused with the 50th year, which actually will be in 2020 (two conventions were held in 1970).

This year marked my seventh SDCC. I started attending in 2012, and have attended every year since, with the exception of the 2018 show. I never dreamed I would one day get to be apart of this prestigious event, let alone seven times. 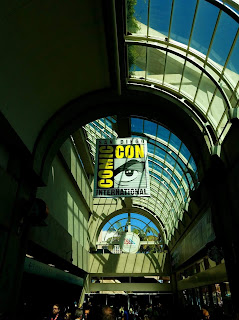 Each year seems to only get bigger and crazier, and it can be very crazy, depending on the particular type of Con experience one chooses to have. Each year has been, for myself personally, chaotic, with many hours devoted to waiting in lines, whether it's for a television panel in Ballroom 20, or the infamous Marvel events in Hall H. After taking a sabbatical in 2018, I decided to officially end my SDCC run, fittingly, with the 50th show, and I vowed to make this SDCC the easiest and most laid back Con I've ever experienced.

What exactly does that entail? For me it meant no Hall H, particularly on Saturday. I opted instead for zero panels, and to simply focus on walking the floor and exploring offsites. Ultimately the only two offsites I was able to experience were the 'SHAZAM!' winter carnival, where I managed to snag a yellow foam lightning bolt in a beanbag game, and the 'Star Trek' museum held at a local gallery, which was centered around the life of Jean-luc Picard, in anticipation for the upcoming series on CBS All Access. There were others that I wished to explore, including the Amazon Prime offsite, but my lack of interest in waiting in a two hour line persuaded me otherwise. 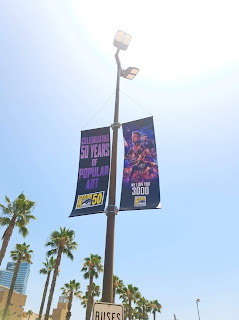 The sad truth of SDCC is the lines. They're everywhere. There are lines for panels, lines for booths, lines for bathrooms, even lines for convention center nachos. It is possible to have a Con that is virtually line free, except one has to pick and choose what they are planning on doing those four days. While my Con wasn't entirely line free, it was much smoother than my previous attendances.

When I wasn't walking the floor or eating delicious food at the Broken Yolk, a popular breakfast restaurant in the Gaslamp Quarter, I was attending Scarediego, (a ticketed Wednesday night event held downtown at the historic Spreckles Theater, hosted by Conan O'Brien, featuring the cast of the upcoming 'IT: Chapter 2', plus never before seen footage) a coveted 'Game of Thrones' cast signing that I had won a wristband to in the SDCC exclusives lottery, and a total of four panels, all walk ins: the 50th anniversary of H.R. Pufnstuf, Kevin Smith's annual Q&A and 'The Jay and Silent Bob Reboot' sneak peek, a screening of a 'Clerks' docudrama, and a screening of 'Scooby-Doo: Return To Zombie Island'.

I was also able to experience the majority of the floor, both the larger studio area and the small press area, where I purchased nerdy trinkets from some small independent vendors. I did not walk through Artists Alley, a traditional event for me, one of the few regrets I have from this year, but being as how the artist area seems to grow smaller and smaller every year, I highly doubt I missed much.

At the end of the day I had the very SDCC experience that I had set out to have; a laid back, borderline improvised Con with zero concrete plans, and it was absolutely amazing. If one is planning on attending SDCC for their first time, these are my recommendations for having the best Con ever:

Plan your con. Make spreadsheets, schedules, pick and choose which panels, if any, you would like to attend, and then pick panels that could be potential runner's up, in case your first choice isn't doable.

Comfortable shoes. This can make or break your entire Con experience. Sore feet and blisters do not a happy nerd make.

Network. Make friends with other Con goers, in line, and especially before you go. There are several SDCC Facebook groups that are manned by both seasoned attendees and novice newbies, all exchanging information and encouragement. This will also come in handy once it's time to purchase badges, as you have a far greater chance scoring one with a group, versus trying solo.

Carry deodorant with you at all times. Nobody likes a smelly nerd.

Sunscreen. The Southern California sun can be merciless, despite the low humidity and Pacific breeze. The last thing you want is a potential photo with Benedict Cumberbatch while looking like a roasted ham.

Water. Because it's cool to stay hydrated.

Follow these rules, and you too can own SDCC. If/when I return (which I will, just in the distant future) you can find me scouring the discount trade paperbacks for new reading material, looking tired, slightly hangry, but mostly happy.