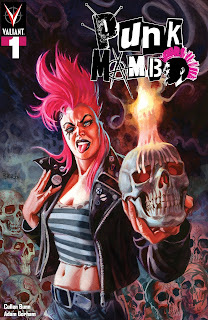 Cool Projects #17 kicks off with the debut of Punk Mambo, a mini series from Valiant Comics.

Punk Mambo #1 introduces us to Mambo, a voodoo priestess on a mission to rescue children from cannibalistic mutants in the Louisiana bayou, but ends up with a whole new set of problems and rescue missions in her own best interest.

Punk Mambo uses her street smarts, mystical powers and sass to make it in her world, though it may new be enough to get through her new issues. Overall I'm really intrigued by the plot and the script enough to continue the series, but fell even more so for Adam Gorham's art, which was exquisitely colored by Jose Villarubia.

Punk Mambo #1 dropped this week from Valiant Comics, featuring the creative duo of writer Cullen Bunn and artist Adam Gorham, who set the tone for an exciting supernatural saga. Grab issue #1 of Punk Mambo now and get ready for Punk Mambo #2 on May 29th!

Another project that caught my eye was a Kickstarter for That Monster Show. 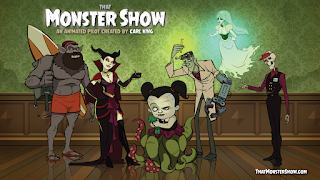 That Monster Show is described as an "Adult Swim style show" based on a group of retro monsters being banished to sunny Florida.

That Monster Show is on its way to its crowd funding goal but can still use our help...with a series of contributor awards they're offering, it's hard to resist. Go check out and consider backing That Monster Show today at:
https://www.kickstarter.com/projects/carlking/that-monster-show-animated

Update: The Kickstarter campaign for That Monster Show has wrapped, but you can still back the project via IndieGoGo at https://www.indiegogo.com/projects/that-monster-show-animated#/