One of my favorite things to share is these 'Cool Projects' that you may or may not already know about, whether it be tv, comics, movies, games, or anything "pop culture" or "nerdy".

We have some interesting stuff in this edition of Cool Projects #15, including a new superhero tv show, a new comic spinoff release from a cult favorite franchise and a great indie comic read. Check them out and enjoy.

First off... I literally just heard about this new superhero show coming out in July, and was so intrigued, that I was inspired to post immediately.

THE BOYS is based on the comic series by Garth Ennis and Derrick Robertson about a group of superheroes who abuse their power.

THE BOYS, developed by Eric Kripke (Supernatural creator), is produced by Amazon and will be streaming on Amazon Prime starting July 26th. Check out this NSFW trailer. It lools pretty wild and entertaining. This is definitely not a kids show!

Next up we have Alex Priest, a comic book mini series brought to us by indie imprint Arledge Comics. 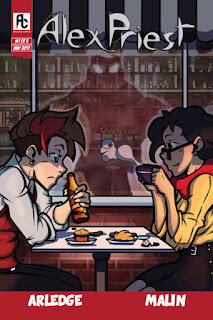 Alex Priest is set in a universe where vampires and demons are planning a merger using magic, to take over the world. Multiple agencies are workong together to prevent the potential apocalypse...

Jenn Arledge pens the series and features the great manga influenced art in this battle of good vs. evil. I'm only 2 issues in out of the 5 part series, and I'm hooked on where the story is taking me. I can't wait to run i to the Arledge Comics crew to pick up the next issue.

You can get more info on Arledge Comics and check out other titles like The Great Witch Artemis and Future Girl at www.arledgecomics.com

I'm also planning to grab Angel #1 from Boom Studios. Angel is a spinoff of Joss Whedon's cult favorite Buffy The Vampire Slayer universe about the teenage vampire hunter protecting the town of Sunnydale from vamps. 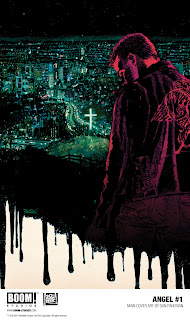 She meets the vampire known as Angel, who becomes a love interest and ally againt evil.

Im curious to see how this comic run parallels the show, as I haven't read any of the Buffy comics. I should probably get on that, huh? Anyways, I think Angel will be worth checking out. Its a great character and created by a great comic team up of writer Bryan Hill (Detective Comics) and art by Glen Melnikov (Power Rangers) with input from Joss Whedon himself. Go get more details at boom-studios.com

Let us know what you think of these Cool Projects, and please follow and tweet us at @thestevestrout and share any interesting projects you've enjoyed or have heard about.