A lot of our younger generation didn't have the opportunity to enjoy the late night monster and sci-fi movies hosted by characters like Vampira, Zacherley, Elvira and the Ghoul. The retro horror host became to be almost a lost art, except for character like the prior mentioned Elvira, and legends such as Svengoolie keeping it alive... until recently.

There's been a resurgence in the horror host genre, with the power of the making it easier to be seen around the world. One of the newest stars of the scene is Detroit horror hostess, Ghouleena. Her debut on The Monster Channel broke records for the ever growing online network, and has been wowing audiences on the horror convention circuit with her spooky charm and vampy beauty, reminiscent of horror queens Vampira, Elvira, and even Morticia Addams! Ghouleena took the time out of her crazy schedule to chat with us, so as always, enjoy and share away...And support your local horror hosts!!!

TheSteveStrout- Where and when can the audience catch your show?
Ghouleena- You can catch the first air date of my show on eerielatenight.com, and shortly after they will go up on my youtube channel & website for free veiwing! I always post about it on all my social media - so as soon as I know my next air date, you can find it there!


TheSteveStrout- Who taught you the sweet dance moves from the first episode, or was it natural talent?

Ghouleena- Haha, you like those? I picked those up when I was working Comic-con in Sandiego. They had a big go-go scene there, I fell in love with their moves!

TheSteveStrout- How long have you been, and what inspired you to create the Ghouleena persona?

Ghouleena- I have been Ghouleena since about March 2017. I was slowly figuring out how to make a Horror Host show (I didnt know what my name should be, what I should look like, ect.) And Retro-a-go-go, (a kitchy cool store out by me) was looking for a vampy model to model their new Ghoulsville masks, and named their character Ghouleena. I sent in some picture, and got the job! Shortly after I realised Ghouleena was my missing link to put my show together. I pitched my thoughts to Doug & Kirsten at Retro and they loved it! They gave me the green light to expand the character, and 8 months later here we are.

TheSteveStrout- What inspired you to become a horror host?

Ghouleena- A lot of things inspired me to start this horror host quest. It was kind of kismet. I have always been an artist, with a wild imagination. I always loved horror, good movies, bad movies, old movies, new movies. And in 2016 I had entered this like 6 month long competition for a radio channel called 101 the WRIF. I made it to the last round & lost! BUT I was surprised & impressed that I made it that far, and decided to keep heading down the path that I was going, and wanted to make a show reviewing horror films, or somthing more my own style.
TheSteveStrout- Is the show your brainchild, or were there other co-conspirators (aka creators) for the program?Ghouleena- The show is 100% my own brain child. I am fortunate to have a boyfriend who can build things for me, and friends who work in lighting, and cinematography. But I come up with everything you see, and edit it all together. Definitely a learning process.

TheSteveStrout- What are your goals with the show?

Ghouleena- My goals for the show, are just to create what it is in my head. I'm not too far off! I just want to teach people some horror history, and get a laugh out of them. All while having fun, and learning more, myself.

TheSteveStrout- Who were and are some of your favorite horror hosts?

Ghouleena- Its so hard to pick one! Can I pick a top 4? Vampira, Elvira, Svengoolie, and Wolf man Mac.

TheSteveStrout- If you could have any horror icon as a guest on the show, living or not, who would you bring on and why? 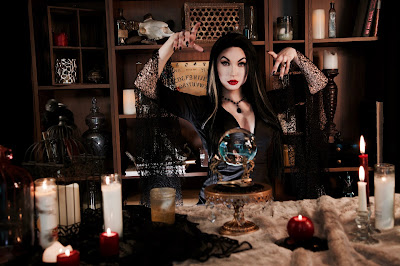 Ghouleena- Vincent Price! I have always had such a warm fondness for him, maybe because he looks like my grandfather. But he's been in EVERYTHING! And we share a birthday!

TheSteveStrout- With hosts like Svengoolie getting aired nationally, and yourself, among others, being available worldwide on the internet going to bring a resurgence in the horror host genre?

Ghouleena- Thats what I had hoped for! But after doing my research, we have a BOOMING horror host under-ground right now. Svengoolie, Mummy & the Monkey, Mr.Lobo, The bone jangler ... List goes on. That site I air on, eerielatenight.com is a great place to find tons of them.

TheSteveStrout- When not hosting classic scary movies, or doing promotional work abroad, what does Ghouleena do in down time?


Ghouleena- I honestly dont get much down time! Haha, my free time goes to putting on this show. But sometimes I have to take a break & just watch tv with my cat, Bruce.

TheSteveStrout- Speaking of promotional work, you're also a spokesperson for some great sites and products. Care to share?

Ghouleena- Retro-a-go-go is the #1 brand affiliated with my character. Without them, there would be no Ghouleena! And it doesnt hurt that their products are so cool. In each episode, you can see a Ghoulsville mask from them on the back of my door!
In episodes to come you'll be seeing some Lindsay Lowe eyewear, and ofcourse a great friend of mine is Eric Pigors who runs ToxicToons. He and I bounce ideas around about my show, so if you like what I do - you'll love his cartoons.

TheSteveStrout- I noticed you've attended a couple horror conventions as Ghouleena too. How's the reception been for the character at those events?

Ghouleena- I have! I do conventions with Retro-a-go-go working in their booth, and occasionally signing posters & taking photos. Its a lot of fun, surprisingly people are pretty excited about seeing a vampire. 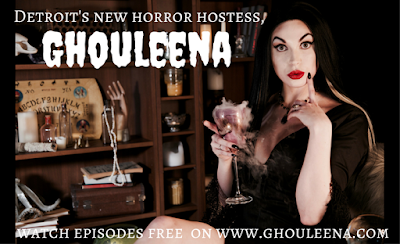 TheSteveStrout- Halloween must me an important day for you? How do you plan on spending your Halloween, Ghouleena?
Ghouleena- Since I work so much in October, its hard to enjoy halloween so I make sure I do as many spooky events as possible! Theatre Bizzare is my #1 go-to, and I was able to catch The Ghoul at the token lounge this year. Between the two, that was my personal holiday.

TheSteveStrout- Anything else you'd like to add or plug?

Steve Strout is the media mastermind (haha) behind this site, host of the Comic Book Swap Meet, nerd, terrible artist, gamer, convention goer and comic book reader who spends more time rescuing toys from thrift shops than a normal adult should. He is also known around the northwest for his promotion of live music and stand-up comedy events and is the creator/producer of the Comic Book Swap Meet mini convention, and Olympic Peninsula Comedy Competition (which will make it's big return soon!). Follow him on Instagram at www.instagram.com/thestevestrout, and  He can be reached for comments at ptcomedy@yahoo.com on twitter at @thestevestrout