Take a look at these great projects that we think you'd be in to. Let us know about any great projects you think we should mention here in future "Cool Projects" posts, be it books, comics, movies, games, or anything that might appeal to our audience!! 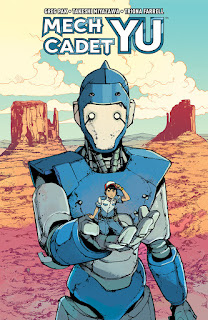 Boom Studios presents 'Mech Cadet Yu' Vol. 1 Discover Now Edition, to be released in early 2018, alongside monthly issue #5. Vol. 1 collects the first 4 issues of the acclaimed story of Stanford Yu, who is recruited into the Mech Cadets. Once a year the The cadets are joined by giant robots to defend the planet from evil aliens called the Sharg. At the time of posting, I've yet to dig in to this series, but between the writing team and Miyazawa's art, very reminiscent of an anime style, I'm intrigued by this story of this boy and his robot buddy.


This special edition, written by an amazing writing team of Grek Pak and Takeshi Miyazawa will only be available in comic shops, with a regular TPB edition being released later in the spring. The series has been so well recieved by readers, that  "Given the tremendous response to 'Mech Cadet Yu' from retailers, fans and press, we’ve decided to release a collection of the series much earlier than usual,” said Filip Sablik, President of Publishing and Marketing, BOOM! Studios. Be sure to keep an eye out for this book and series, and stay tuned to Boom Studios at www.boom-studios.com for the latest info on 'Mech Cadet Yu' and the other great titles they have to offer.

The "Cool Projects" Halloween theme continues with 'Asleep in the Nightmare Room' by T.J. Tranchell . 'Asleep in the Nightmare Room' features ten terrifying short stories, a handful of bone-chilling poems, and a series of essays on the authors favorite--and not-so-favorite--horror films.
Born on Halloween, Tranchell has lived with the monsters in his head for almost forty years. Now, he invites you into this room full of nightmares and dares you to fall asleep.

Learn more about T.J. Tranchell at http://www.tjtranchell.com  and order his spooky anthology of horror, 'Asleep in the Nightmare Room', at http://www.blysster.com/store/store/asleep-in-the-nightmare-room/ , and watch for his appearances on the Northwest convention scene.


Quantum and Woody #1: MOST VARIANT COVER OF ALL TIME- Valiant Comics 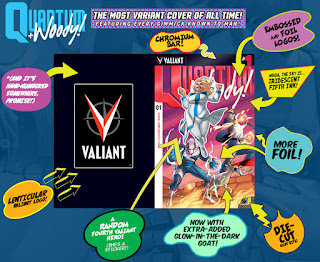 Though an established series and not just a project, but this issue of 'Quantum and Woody' is so ridiculous that it's AWESOME. Valiant Comics took all of those obnoxious comic cover gimmicks, that were especially predominant in the 90's, and and combines them all on to one MOST VARIANT COVER OF ALL TIME! Everything from the embossing to the foil logos adorn this highly collectible limited cover. Good luck scoring a copy of this cover.

Not to be overshadowed by the MOST VARIANT COVER OF ALL TIME, there happens to be a great story inside the book too. This is a  "reboot" of sorts, but the original series brings us the story of a pair of adpoted brothers, who start as best friends, but become estranged for years. They're reunited by the mysterious death of their father, which bring them together to investigate, and find the killer. During said investigation they obtain super powers in a lab explosion, forming their superhero characters of 'Quantum and Woody'. Sounds pretty straight forward for a superhero comic, except they provide endless comic relief...and they'll vanquish if they don't clank their metal wrist bands together daily! How fitting for 'Quantum and Woody' to be opitomized with this outlandish (but AWESOME) cover. By the way, 'Quantum and Woody' is also being developed into a TV series. Details at www.ValiantEntertainment.com