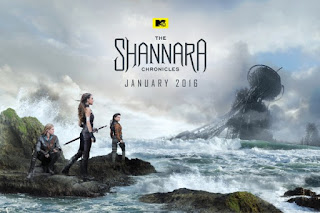 Though I haven't read any of the books in the Shannara series yet, I've been really looking forward to the tv series based on legendary fantasy/sci-fi author Terry Brooks' novels. Here's my thoughts without spoiling and giving away very much plot.

I am really into fantasy epics like Lord of the Rings and Game of Thrones, and based on this debut, Shannara really fits that mold. As I said, I'd really been intrigued by prospects of the show, but at the same time I was kind of worried about it being an MTV show. I grew up an 80s kid, way back when the network actually played music. Remember that? I've also had the displeasure of watching MTV programming go down hill with all the reality nonsense, but that's one guys opinion. They have eased those concerns a bit with their recent run of horror, drama, sci fi original programming though, so I'm all over Shannara.

The network did a great job with their promotion of Shannara. They did an even better job with the production. The sets are beautiful. So colorful yet realistic. The landscape is comparable to the beauty of the LOTR and Hobbit backdrops (Which males sense due to being filmed in New Zealand, as were the Tolkein/Peter Jackson films), yet they have a less c.g. feel to them. I'm sure that's attributed to a lower budget, which in this case is a good thing. I'm reading other reviews mention this as a fault, but I absolutely disagree and am more then impressed with the show visually.

As for the story, Without giving away too much for those unfamiliar with the books such as myself, This has the makings for an exciting SciFi/Fantasy saga, comparable and obviously inspired by Tolkein's writings, but with a modern feel. This first episode introduces us to the main characters Wil the half elf, Allanon last of the druids and Amberle the princess who's stories become intertwined and must work together to stop the return of the demons from the forbidding.

I think it's a visually stunning and we'll scripted show above and beyond the usual basic cable science fiction and fantasy program. Like I mentioned prior, I haven't dove into the books yet, but I'm digging in asap. I DID make sure to watch with my friend @mrnutter32 ,who is a huge Terry Brooks fan and has read the Shannara books, and seemed to really enjoy it, and says "they're doing a great job with it so far". He's a an of few words so that says a lot.

I also managed to get opinions from an friend and assistant to Terry Brooks, and great writer in his own right, Shawn Speakman (look him up!). Shawn tells us that "Terry Brooks has worked closely with the show writers on every episode script" and "Has maintained the integrity of his novel's story in this adaptation". He also stated that the plot points are all there.

Thanks for reading. I know indont always do tv show reviews, but there was a lot of hope and hype in Shannara, so I had to! Dont forget once we hit 1k Twitter followers were doing a giveaway that includes a piece of signed memorabilia from another Sci Fi and Fantasy legend, Brian Herbert. Go follow @thestevestrout, the milestone is coming up fast!