We caught up with Mick Gray, inker on Robin; Son of Batman recently for this Q&A. We are doing a giveaway along with this interview, so share and read on for details!

TheSteveStrout: You've been been working on Batman "family" titles quite extensively throughout your career. How do you feel this latest title, Robin: Son Of Batman measures up to the other Batman series' you'be worked on?

Mick Gray: Well, it’s definitely much more all ages oriented in the subject matter, the way Pat is writing it. DC is trying to attract a younger audience in general. I think this book is terrific in the way we got to continue the story we started way back before the New 52. If you look at it overall as one big story we have been following Damian for approximately 50 issues now. Pretty impressive, I must say!

SS: Do you feel added pressure when working on one of the most popular franchises in history?

MG: YES!! I always am humbled by the history and mythology of the characters we work on. I totally feel like we are now part of DC’s massive history and it’s a pretty neat feeling.

SS: You seem to have a chemistry working together with Pat Gleason having worked on Batman and Robin and now Robin: Son Of Bat man. Was there any difficulties in transitioning between the end of a run on one book, and starting a brand new series?

MG: Like I said it’s just a continuation of what we were doing in Batman and Robin. The difficulties I think were on Pat’s end, having to adapt to writing and pencilling at the same time when we started Robin: Son of Batman. Not an easy feat, but I think he’s been doing a good job. There is a major chemistry between the two of us for sure. In this industry, as far as I’m concerned, if you stumble upon a penciler you like and can work with it’s important that you nurture that relationship so you can work together for as long as possible. This makes for the quality and consistency we strive for and I hope show through in our work. 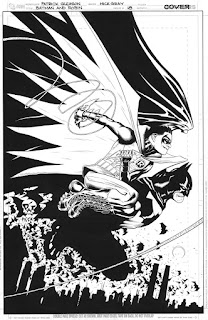 SS: Do you feel a new reader could jump right into reading Robin: Son of Batman with no knowledge of the character?

MG: Yeah, I’m pretty sure they could. It’s written in a way so new readers could enjoy it and New 52 fans can continue with it. Pat really handled that transition well.

SS: Your work has appeared in a ton of books from Promethea to Punisher, and Green Lantern to Star Wars doing covers, pencils, inks and color. What aspect do you feel is your strong suit?

MG: First off, I’ve never done anything other than inking. I am an inker. I consider myself a specialist. I love inking so much that I don’t look for other work. I will stick with it as long as people keep wanting me to do it. I feel so honored to have inked over the likes of Patrick Gleason, J.H. Williams III, Ryan Sook, Barry Kitson, Lee Bermejo, Steve Ditko, Jack Kirby and Neal Adams! It’s been an amazing run, inking comics for the last 26 years… I’m hoping it continues of a long time to come!

SS: Your partner on Robin, Pat Gleason is doing art and writing on the series. Have you done any writing on any projects you've been involved in?

SS: Are you currently invovlved with any other comics?

MG: No. No time. The only way I can get anything finished is to center myself on one thing at a time. 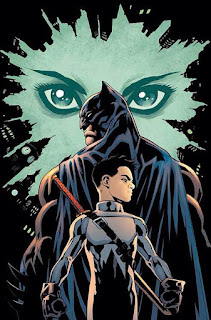 SS: You have work in award winning books, and even more exciting (as far as I'm concerned), you've inked work for the legendary Jack Kirby! I don't see how one would top that, but what would be your dream gig in comic books?

MG: After 26 years in this business, it is still a dream gig. Every day I pinch myself.

SS: What was your first pro comic job?

MG: I started as an inking assistant at Slave Labor Graphics. Then I assisted Mark McKenna on many Marvel books. My first solo inking job was the Jack Kirby co-created Phantom Force on Genesis West.

SS: Ok, I have to mention about Al B. Mouse. Tell me about the character.

MG: He was just a character I drew in people’s sketch books for fifteen years. Then in 2009 with just the right inspiration, time and money, I produced my one and only creator owned book. It’s a little A-B-C book called Al B. Mouse’s Abecedarium. I produced 200 copies in hardcover, but now it is available as an e-book. It was my labor of love, but frankly I don’t think I will ever produce another book on my own. Who knows?

SS: Where can we find you on social media? Anything else you want to plug? Any upcoming conventions?

MG: My facebook page is www.facebook.com/inkermick If you want to friend me I’m usually discussing music at www.facebook.com/mickgray
My website is www.mickgray.net  I have lots of original art available. Just send me a message via Facebook and I will send you a list.
I will be at Silicon Valley Comic Con in March. It may be my only appearance this year.

Hope you guys dug this interview. Be sure to check out Mick's work. He's worked with the who's who in the industry! Check out Robin; Son Of  Batman as well as the other great books he's inked! We have a special treat with this interview. We have a few copies of some comics signed by Mick that were going to give away to a random reader, so share and hashtag #ComicBookSwapMeet for your chance! Still planning on a separate 1000 follows giveaway on Twitter too!!!