Pretty Good Week...Sad, Not The Best, But Still Pretty Good

First and foremost, I say maybe it wasn't such a good week because, if you hadn't noticed, we've lost some beloved pop culture icons in the recent days in David Bowie and Alan Rickman.


How many of you grew up in the 80's and hasn't had this song embeded in your memory banks?
The Labrynth was one of the iconic films from my childhood, and Jareth the Goblin King was a terrifyingly wonderful character portrayed by the great David Bowie who passed a couple weeks ago now.

His role opened the doors to his music for me personally, especially the Ziggy Stardust era which has a huge influence on my musical tastes, from punk rock like the Ramones, to 70s power pop and classic rockers like Cheap Trick, to the 80's glam rockers I grew up on like Motley Crue.

The Spiders from Mars even looked like real life aliens. What's more nerdy than that! Bowie went through many different personas and sounds with his musical art! He was not only a brilliant musician, but to bring up the afore mentioned Labrynth, he was a great actor too (The Man Who Fell To Earth for example). He will be truly missed. The world lost someone special.

We also lost one of the best actors of this era in Alan Rickman. My first intro to him was his over the top mad portrayal of the Sheriff of Nottingham in Robinhood: Prince of Thieves. He brought so much energy to the role as the perfect foil to Costners bland Robin Hood. He stood out as the villain on Die Hard too.

Another brilliant Alan Rickman part was as the angel Metatron in Kevin Smith's Dogma. Have a look:

He's probably best known for his role as Severus Snape in the Harry Potter series. Now, many people are surprised when I tell them how I'm just now getting into the Harry Potter books and films (literally just watched the Half Blood Prince, so I'm a little emotional from that ending), and Professor Snape has grown on me as the realest deepest character, though he has minimal dialogue compared to other characters. His brooding sternness has a real Darth Vader feel (yeah, I use Star Wars as a basis of comparison quite often in life). He's just one of those characters you love to hate. Then when you dig into Alan Rickman as a person, you find a genius mind...oh and Galaxy Quest! Doctor Lazarus...By Grabthar's Hammer, you shall be missed! 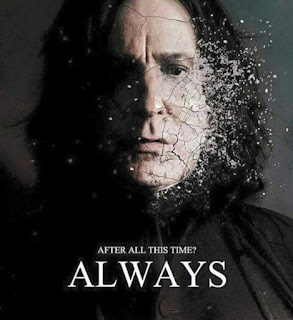 Sadly these two amazing talents were taken from us far too soon by cancer. Cancer has taken many loved ones from us, and personally I've lost some of the greatest people I've known, so I feel strongly. I encourage everyone to do their part in the fight. Donate to cancer research or to any organization that helps with expenses. Take care of yourselves, because prevention and detection is a thing. Personally I like to contribute to the Fuck Cancer campaign that Arrow star Stephen Amell is associated with. You can get info on that not for profit organization at www.letsfcancer.com ...come join me on #TeamAmell ...

Ok now that I got the sad stuff out of my system, I need to mention a few things.

- I'm really excited for the Deadpool movie in a few weeks.

- Even more excited for the Walking Dead to be back on! We're finally going to meet Negan, the baddest of the bad guys.

- We have a tentative date for the next Comic Book Swap Meet. The Comic Book Swap Meet is a mini comic con that I produce on the Olympic Peninsula here in Washington State. We do it a couple times a year and feature vendors, artists, special guests, cosplay, gaming and more. Stay tuned for details here and in the Facebook Group: www.Facebook.com/groups/comicbookswapmeet

- When we hit the 1000 followers mark on Twitter Were doing a giveaway of some fun nerdy prizes including a piece of autographed Dune memorabilia from bestselling author Brian Herbert, and more. Go follow @thestevestrout

- We also did a recent interview with an artist from DC Comic's Robin: Son Of Bat man, Mick Gray. We have a comic signed by Mick to giveaway to a reader of we get enough viewers and shares around social media...basically we have a bunch of cool stuff to give you all as a thank you for supporting thestevestrout.com!

-We're still always looking for new contributors to the site too, so if you have ideas, wanna review media (not limited to comics and novels), or maybe cover a convention in your area, get in touch! We have a new cosplay themed feature in the works too, so be on the look out!

I guess that was more than a couple announcements, wasn't it? 😉