Rose City Comic Con goes down this weekend, and like we always do, here's the first of our Rose City Comic Con (RCCC) preview Q&A's. This first one features one of the most prolific comic book writers on the scene, Chris Sebela. Mr. Sebela is one of the busiest writers, usually having no less than a handful of projects going on at any given time. We were lucky enough to have him spare a few minutes for us and this Q&A. Be sure to check out more of his stuff at www.christophersebela.com, and be sure to swing by his table at RCCC! For more RCCC info go to www.rosecitycomiccon.com


TheSteveStrout:  Youve recently worked on titles like Welcome Back and Escape From New York, along with your own book. How do you keep the creativity flowing with many projects on the works? Is it ever overwhelming? 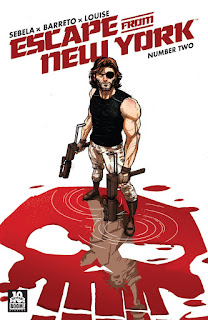 Christopher Sebela: Sure, it definitely is at times. I have something like a dozen different projects going at any different time, all of them in various stages, so just trying to keep everything straight in my head is a lot. But this is how I work best. I need things to jump to when I get stuck on another thing. If you treat a roadblock as a setback and push all that momentum onto another thing, you’re still getting things done and that’s what I try to do when I sit down to work.
TheSteveStrout: Are you reading or following any of your peer's work? Anyone inspire you?
Christopher Sebela: Lots. There’s almost too much to keep up on on a regular basis. Right now I’m really into Ed Brisson’s stuff. I just finished his run on THE VIOLENT which I thought was top-shelf work by everyone. I’ll read anything Kate Leth puts out. I’ve been really into catching up on Abby Howard’s webcomics and, yeah, this is a bad question for me because I’m reading constantly, and I try to make good choices before I plunk down money, so all of it is inspirational. The fact that there’s so many different kinds of books from so many different  creators, that’s probably more inspiring than any one person or book out there. 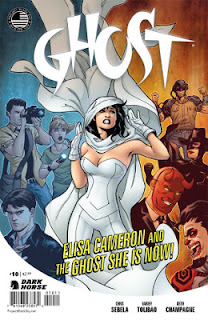 TheSteveStrout: I mentioned "your book", referring to your Clown Motel project you regularly mention on social media. Can you tell us a little about that?
Christopher Sebela: Well, a year ago I started a kickstarter campaign to fund me going to live in what some people on the internet have called “the most haunted motel in america.” The Clown Motel is this clown-themed motel in the middle of nowhere, right next to a turn of the century graveyard and down the road from an abandoned silver mine. So I, of course, wanted to go live there for a year and see what would happen. Turns out there weren’t a lot of ghosts but a lot of other messed up stuff happened and I’ve done a zine version that kinda condenses what happened in those 30 days and I’m finishing up a prose book that I promised to all my backers that goes way more in-depth about everything that went on, why i did it, stuff like that.
TheSteveStrout: With Rose City Comic Con almost upon us, is there anything in particular you'll be promoting at the con? 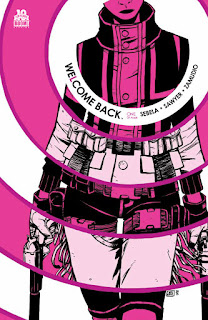 Christopher Sebela: I’ll be selling everything I got. Escape from New York, Welcome Back, Heartthrob, Dead Letters. I’ll have stickers and buttons and a limited supply of Clown Motel zines. I will also have hugs.
TheSteveStrout: Being local to the Portland area, do these hometown conventions mean more personally to you?
Christopher Sebela: It’s definitely been inspiring to see Rose City grow from a tiny little show into this big thing. The fact that Portland has the kind of community, that the community can support this show and make it grow, those things make this show mean more to me. Also the fact that I can sleep in my own bed at night and don’t have to go anywhere near an airport except to pick up and drop off friends are two amazing perks to a hometown show.
TheSteveStrout: Do you have your table assignment yet? Where can fans find you at the show?
Christopher Sebela: I’ll be at Table L-09 and if I’m not there when you come by, I’ll be right back, I swear.

So who is coming to Rose City Comic Con this weekend, September 10-11th? Follow @thestevestrout on Twitter, to keep up with the happenings, and if you have anything fun to share from RCCC (or any other con, for that matter) use the hashtag #ComicBookSwapMeet

If you're at RCCC this weekend, track me down and grab one of my www.thestevestrout.com zombie pins!!!