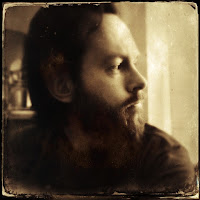 I had the pleasure of meeting my next interviewee at Emerald City Comic Con earlier this year. I'd been a fan of this guy's art since I first seen 30 Days Of Night, and have loved his stuff ever since. If you aren't familiar with Ben Templesmith, enjoy this little intro, then go out and check out as much of his stuff as possible. Enjoy my Q&A with Ben Templesmith!

TheSteveStrout: Your latest work I know of is Blackholers, which is your creator owned web series, which recently went into print. Was it always the intent to put the series in hard copy format?

Ben Templesmith: Yup. My intent was to give it to the world in a fashion, for free, but gear it for my own personal printing ( because I'm actually all about making artifacts/objects...ie BOOKS! ) Nothing against web comics. I mean, the best of them get collected into a book anyway. Because there's demand. People still love books. I'm not just making it a book though each issue, I'm making wax sealed "squid packs" filled with a few other nifty things. I'll keep that up as long as I can. Makes for a bit more work though. I imagine once I've finished it and printed up my own limited edition copies ( They're literally signed and numbered ) I'll try and get it into the direct market in a "mainstream" version. But this thing is a labour of love supported by my rather devout fans via patreon. ( Patreon.com/templesmith plug plug ) So far it's working and should do to five large issues. ( Each book seems to run 42 pages with 35 or so of story. )

TheSteveStrout: You've been using Patreon to fund Blackholers as well as other projects correct? Can you tell us a bit about the other stuff you're working on?

Ben Templesmith: The Patreon is really a sort of fan club I guess. At least, that's how I'm treating it. They get all the special stuff and see things before anyone else. I'm using it to do an art book too. Reinterpreting the 72 demons of the Goetia. ( an old 17th century thing with great inspiring old worldy illustrations ) I do roughly one demon a week. So, 72 weeks to get that done. I just hit the halfway mark. Some patrons at certain levels get to choose a demon print each month. Which makes for a lot of work mailing them out but it's a lot of fun too. I'll probably try and do a kickstarter ( Finally the first one I handle myself, after the issues I've had in the past ) to make a fancy print edition when it's all done. ( Printing that thing will be expensive. ) 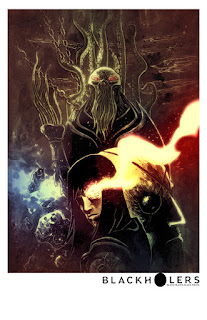 TheSteveStrout: Does your creative approach differ from the "fan funded" projects to the big publisher work?

Ben Templesmith: It's what I live for really. They keep me producing, and producing things *I want to do*... which, in theory, makes them better than stuff just done for a paycheck. ( Yes yes, all the PR on all the licensed stuff usually says the creative love what they're working on...but outside those special few, when you don't own/create it all yourself...it's just not the same. It's building your own house vs renting someone else who tells you what colour you have to paint the walls. ) Plus, the feedback is awesome. Not to mention helping pay the rent at the same time. It's made stuff quite viable and helped me survive the better part of a year. ( And an awful year to boot )

TheSteveStrout: Is it safe to assume the "fan funded" projects allow you to share your creative process with your fans more than you would doing a DC or IDW title?

Ben Templesmith: I probably just answered that, but yes. When you're the boss, you don't have to worry about corporate folks telling you what to do. While you can call it "fan funded" ( which is totally true ) though all corporate books are ultimately "fan funded" or who else is buying them? All crowdfunding of any sort allows is for creatives to go *direct to consumer* and to a large extent, cut out the middle man...corporate publishers. (Not retailers though, am happy to sell my books to them!)
TheSteveStrout: Is there more pressure when working on a title like Gotham by Midnight, which spins off an iconic character like Batman, compared to something you create, or have a hand in creating?

Ben Templesmith: Well, that's really part of a huge property. And Batman has a history. So, it was an honor to add to that. But really, I just followed the script as best I could. I'd crap my pants if I had to actually come up with new stories set in that rather historied place. I'll draw stuff but couldn't imagine writing it myself. I do love Batman, so it was an awesome chance to cross it off the bucket list, thanks to Ray Fawkes. WFH in general just isn't for me though, on any sort of regular basis. 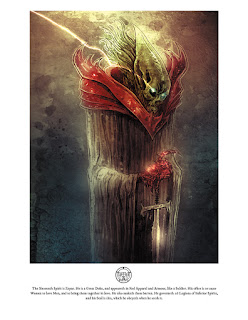 TheSteveStrout: My personal introduction to your work, was the 30 Days of Night series, where I fell in love with your art, then Wormwood solidified that. I won't ask much about either series since I'm sure you've heard it all before. I am curious about working with Steve Niles, one of the best horror writers around (and a super nice guy). Was it your first project with him? Your spooky beautiful art and his writing are as perfect a team-up as I've seen. How did the pairing come to be?

Ben Templesmith: Well, his scripts were tremendously open, thus easy and fun to work on! We started out working on "Hellspawn" together, for Todd McFarlane Productions, ( Which was my first ever real book )  and had a lot of free time between issues so decided to do our own little book between it. It really all went from there.

TheSteveStrout: I commented on what I refer to as your "spooky beautiful" art. With a lot of artist you see working in comics, you can see the influence of past artist in their styles, but yours is a class of its own. Where do you find the inspiration for your creations?

Ben Templesmith: Oh no, every artist has their influences. I just come from the school of Ashley Wood/Ralph Steadman/Dave McKean/Sam Keith really. Plus a few others. Seems a good half of artists out there these days come from the Jim Lee branch of influences though. Nothing wrong with that, but no artist is a true original, we all build on artists who've come before really. I appreciate that you think I'm unique but if you saw the guys who influenced me, you'd see me incorporating bits of them all! It's just that everyone comes from somewhere and then makes it their own.

TheSteveStrout: Each one of your panels is really a work of art. Does that make deadlines difficult?

Ben Templesmith: Heh, well, that's your opinion. Not everyone is so kind! Honestly I don't try to make every panel a "work of art". They're meant to help tell a story. I think sometimes if you overwork and make every panel too attention grabby, that's not good for the overall page. And what you're seeing... with most artists really, is their evolution of "how to make it good while making it within the deadline". Obviously, not all artists ( including me at times! ) get the hang of the deadline thing. But it's all an evolution of working under pressures. And ultimately you're a better artist when you're under the gun. It forces you to adapt and evolve.

TheSteveStrout: Who were or are some artist you're into?

Ben Templesmith: Well, I'm into a lot of artists, but can't say they all influence me... at least not like my younger days. Paul Pope and Mike Mignola definitely come to mind more recently. I'm nothing like them but admire their total mastery of the craft.

TheSteveStrout: When not buried in art work, what else is Ben Templesmith all about?

Ben Templesmith: Right now I'm always working on *something* in the desperate attempt to pay the rent. If I get any downtime... I play strategy games ( No, not RTS's I mean the horribly more technical and boring to most folks who like pretty graphics ones! ) or sleep. 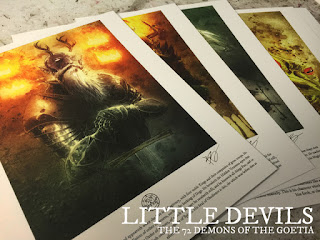 TheSteveStrout: Any projects coming along that you can or would like to mention?

Ben Templesmith: Well... all that I'm doing is currently in production really, and folks know about it. I'm trying to gear up to do more Wormwood though, and perhaps add it to the Patreon in a fashion.

TheSteveStrout: Where can one find out more about you, buy some art, or support anything else you'd like to plug?

Ben Templesmith: The usual spots, templesmith.com, 78Squid.com for my store and patreon.com/templesmith for all the fancier stuff if people want to get in on the ground floor.
Hope you enjoyed the read. I urge you to look into this amazing creator!