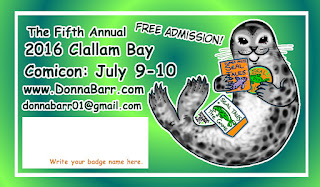 Though thestevestrout.com couldn't attend the Clallam Bay Comic Con, we'd appreciate if you would take a few minutes to check out CBCC recaps from our friends, Donna Barr and Dara Korra'ti.

Dara Korra'ti tours conventions, and geek culture events performing her brand of whats been referred to as "hardcore folk" music under that name Crime and the Forces of Evil. You can find her original tunes at www.crimeandtheforcesofevil.com...She also did her own great recap of the Clallam Bay Comic Con! It sounded like a nice time...Check it out here

Where going to put our best effort in to getting out to the coast for this show next year, and I'd suggest taking a road trip out as well.

Do you have any fun conventions (big or small) in your area that you'd like to share a recap with everyone? Get in touch! We'd love to have you do a guest post. We are also looking for media reviewers for stuff like comic books, tv, movies, video games, and whatever else you geek out for...