Before this next round of ramblings, I'd like to, unfortunately, mention the passing of Noel Neill. Noel Neill was known for her role as the original Lois Lane from the 50's era Adventures of Superman, alongside George Reeves. Some of my earliest television memories were of old re-runs of The Adventures of Superman. She'd make appearances in other incarnations of the Superman franchise, but will always be remembered for her role as Lois Lane. R.I.P. Noel Neill


On to lighter subjects...

As a geek and SciFi fan, I was excited for the sequel Independance Day. I assume many of you shae the sentiment. How could we not be excited? Did ou see the trailers? Big...flashy...aliens...battles...It looked to be of epic proportions. It SHOULD have, but it wasn't. It felt like a poorly acted, SyFy network original movie. I was not impressed by the cast. I found myself hoping the alien invasion would prevail and end humanity. No such luck. The earthlings prevailed in this predictable mess. I don't even think Will Smith could have made this film enjoyable. On a good note, It ws nice seeing the aliens on screen more than the first movie, though they were pretty generic looking...I wonder if they'll break even with their huge budget?


I also checked out the Spielberg and Disney film BFG. BFG is based on the childrens book of the same name by Roald Dahl. I managed to get a little more into this one. The story is about a giant from a hidden giant land who would sneak into population and give people dreams. He is seen in the act by little Sophie, so he brings her to the giant land where the story begins..This is a fun family fantasy full of humor and charm. It goes over well for Disney movie fans. I'm glad I watched it on the big screen.

What movies have you seen in the theaters lately? Come talk about it in the thread at www.facebook.com/groups/comicbookswapmeet. I'm thinking of seeing The Legend Of Tarzan and The Secret Life Of Pets this weekend...These trailers look great!

Working on some other conventions over the next couple months, We'll announce asap! Are you attending any conventions? Wan't to share your story about the show here? Get in touch and we'll work it out. 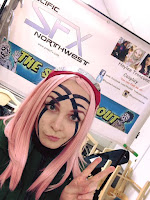 One last thing, ICYMI: Our cosplayer friend, Haylee Troncone is going to be doing periodical posts about the who, what, when, where, and hows of cosplay.  Check out here first post about why she does it...Maybe even help her name the column! Be inspired!! Check it out HERE