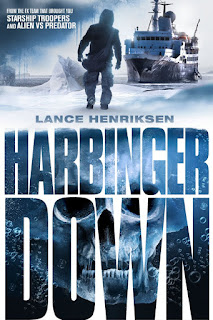 We talked about Crypticon, and the Aliens cast "reunion". I also mentioned the screening of cast member, Alec Gillis' film, Harbinger Down. Here's some thoughts.

Harbinger Down is about a group of college students on board a crab boat in the Bering Sea, who discover the wreckage from a Soviet space craft, that had remained dormant and frozen for decades. They make the mistake of bringing it on board only to awaken a hungry alien organism, then all hell breaks loose.

My favorite aspect of this movie is the fact that SFX creator Alec Gillis, wrote, directed, and used ALL practical FX throughout. Alec Gillis really gives a nod to the great 80's practical monsters especially the Alien and Predator films, of which he worked on with his company Almagamated Dynamics Inc or ADI (Starship Troopers, Alien 3, Jumanji).

Other than the always wonderful Lance Henriksen, I wasn't familiar with any of the other cast members, which had no negative effect on Harbinger Down. I was pleasantly surprised by the performance of Camille Balsamo (Sadie) and Winston James Francis (Big G), so if you encounter them, send my praise!

This film was made on a low budget, and partially crowd funded, but thanks to Alec Gillis' wizardry with FX a wonderful directorial debut, we have a fun movie that I will undoubtedly watch again and suggest to not only fans of the Alien franchise, but a suspenseful, SFX filled (and sometimes funny) ride! Check out the trailer...


For more info on the film: www.facebook.com/HarbingerDownOfficial

Harbinger Down is available on Netflix and Amazon, so give it a shot!