I've spent the last couple weeks geeking out over some movies and a fantastic show, but before I touch on the good, let me mention the sad.

I'm sure most of you have heard by now about Anton Yelchin's untimely passing. Unfortunately this is the news I woke to. I really love the work Anton has done as Chekov on the Star Trek movie reboot series, and am deeply saddened by the loss. The kid was far too young and talented. Who knows what the future held for him. This is reason to never take life for granted, because it can all be taken at any time. In this case, it was far too early. May his great work stay in our memories. LLAP, friends...


Ok. with that out of the way...You shoudl see the following two movies on the big screen before they leave theaters!

TMNT 2 and Warcraft were the big "nerdy" films over the last couple weeks, and neither failed to entertain completely. First off TMNT took a big step up from the first movie, which I really didn't care much for. I kinda set the expectation a little low for this, but they made it feel more like the old cartoon series we grew up on by adding more of the great villians from the TMNT show. Megan Fox even stepped up her game in the April O'Neill role. My highlight was Stephen Amell's big screen debut as Casey Jones! Amell did a fantastic job, and I believe we have a future movie star after his Arrow days (which I hope don't end any time soon...just saying). It was worth me seeing twice!

I've never played Word Of Warcraft, so had no idea what I was getting myself into...WOW (pun totally intended)...Not knowing the story behind the saga, has no bearing on the ability to follow the movie. I kept right up on the story, without being being distracted by wonderful CGI work and masterfully shot film. I hope they continue the film series...I'll be there with my ticket money.

I finally got the chance to see Kevin Smith live too!

You know Kevin...actor...director...writer...producer...comic writer...podcaster...geek trailblazer..
.also known as Silent Bob. He is currently on a tour with his friend and man who portrays his sidekick Jay, Jason Mewes, called Jay and Silent Bob Get Old.

They're sharing stories from their lives and careers, and doing bits from their podcast of the same name. The show might have been one of the most entertaining shows I've seen in ages. Jay brings that same energy he brought on screen when he played the off the wall, crude, party guy Jay. Jay an Silent Bob seem like the best of friends on and off screen...and now on stage too! If this tour or any of the show tours under the Smodcast banner come to your town, you HAVE TO check it out if you enjoy being entertained! 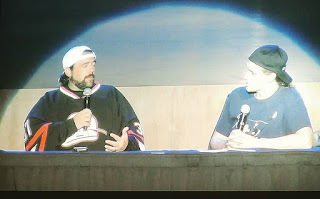 I'd always played with the idea of starting a podcast, but this show (as well as BJ Shea's Geek Nation, Twiztid's Ashtrays and Action Figures, and Nerdist) really inspired me to get the ball rolling on that idea asap. We're gonna talk everything from fandoms, music, collectibles, movies and television, as well as have great guests and so much more... What do you guys think? Who'd listen?


Steve Strout is the media mastermind (haha) behind this site, host of the Comic Book Swap Meet, nerd, terrible artist, gamer, convention goer and comic book reader who spends more time rescuing toys from thrift shops than a normal adult should. He is also known around the northwest for his promotion of live music and stand-up comedy events and is the creator/producer of the Comic Book Swap Meet mini convention, and Olympic Peninsula Comedy Competition (which will make it's big return in 2015). Follow him on Instagram at http://instagram.com/thestevestrout, and  He can be reached for comments at ptcomedy@yahoo.com on twitter at @thestevestrout