Not too many people know that I've been a pro wrestling fan off and on most of my life, so when I heard about Image Comics' announcement of this new series about the wrestling industry called RINGSIDE, I had to learn more.
As luck would have it, I had already been acquainted with the artist on the series, Nick Barber, through another comic artist friend.  Nick is new to the comic world, but he jumped right in to this book like an old pro and meshed perfectly with Joe Keatinge, whose writing credits include Hell Yeah, Amazing Spider-Man, Savage Dragon, and now Ringside. They were gracious enough to grant me one of the first interviews for Ringside! Enjoy the Q&A, and check out this comic when it hits the stands. I've seen a preview and your in for a treat, whether your a wrestling fan or not!


TheSteveStrout (TSS): Nick, Congrats on your first job on a major publisher. How cool is it to get right in working with an established comic writer like Joe Keatinge? 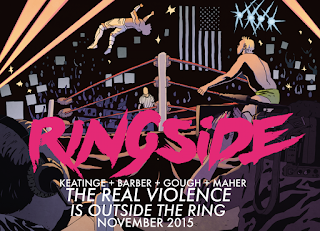 Nick Barber: Thanks Steve. Yeah, it's pretty overwhelming on a lot of levels. This is my first professional book... also, a childhood dream to work on something at Image. It's been really easy working with Joe though, his scripts are very clear and enjoyable to read.
TSS: Joe, how about on your end? Was it easy to get right to work with a lesser known (although brilliant) artist?

Joe Keatinge: Working with new collaborators, whether they're veterans or brand new to the medium, is my favorite aspect about comics and someone as brilliant as Nick makes it very easy.

TSS:  Who came up with the story for Ringside, and how did you guys connect for it?
Nick: It's something Joe had been developing and pitching. My understanding is that it's evolved a little from the initial pitch. We talked over skype about what we might work on together. I wanted to draw something with a Michael Mann sort of tone - particularly stuff like Heat, Thief, Collateral... that type of thing. Ringside definitely fit what I was looking to do.

Joe: I conceived Ringside back in 2009 - '10 and pitched it around for years, rejected by Image, Skybound, Dark Horse, Oni and Vertigo. Every time I tweaked it, not so much due to the rejection, but because even I knew it wasn't exactly right. Then I saw Nick's art on Tumblr and thought, "this is the guy."
TSS: How would one or both of you guys pitch the book to new readers?
Nick: It's like The Sopranos if Tony was once a pro-wrestler... No, I dunno that's not entirely it... It's a look at what happens outside of the wrestling ring... the good, the bad and the really ugly. I also want to make it clear that an arcane wrestling knowledge isn't a prerequisite for Ringside, it will appeal to both hardcore fans and non-fans alike.

Joe: RINGSIDE is an ongoing series set within the world of professional wrestling combining the ensemble drama of THE WALKING DEAD with interconnected rotating perspectives akin to The Wire. Each issue will explore the relationship between art and industry from the view of the wrestlers themselves, the creatives they work with, the suits in charge and the fans cheering them all on.
But that's just the beginning.

The real violence is outside the ring.

TSS:  How exciting is it that Ringside will be previewed in one of the top selling comics? It should really help with the launch and initial sales.
Nick: Yeah that is really huge and exciting. Definitely a big honour to be previewed in The Walking Dead. I think there is a big cross-over with readers of that book too, there are no zombies in Ringside however... or ARE there!? No, there's not... But it's an ensemble drama for a more mature audience. If you like The Walking Dead I'm pretty sure you'll love Ringside too.

Joe: I've been reading Walking Dead on a monthly basis since issue one and seeing its meteoric rise has been nothing short of inspiring. It's a huge honor to be some small part of its history.
TSS: How did you prepare yourself to do the art for Ringside?
Nick: As mentioned before this is my first professional comic which kind of freed me up to do it however I liked. At first I tried a few different style in preparation - but once I read the script and got a feel for the tone, I feel like the art style chose itself. It's a really sketchy, loose style - trying for something lively, energetic something with some heart to it - not overworked to death.
TSS: Did you have to immerse yourself in learning about the pro wrestling biz to develop an understanding, or were you already into it?
Nick: I feel like Joe would be far more immersed in the wrestling business than me - but yeah we are both fans of wrestling so it was pretty easy. In hindsight I probably should have done some method comic book making and done some wrestling training - but my weak artist body would have been rapidly destroyed. Art-wise I'm not too hung up on getting every detail correct - as long as it has life and energy to it.

Joe: Wrestling has been a life pursuit, from the 1980s WWF Superstar era to the 1990s Attitude Era, then getting into the indie and international circuits whether it's New Japan or Portland's own DOA Wrestling. I love it in all its forms.

TSS: Whens the official release date of Ringside?
Nick: November (25th I think but need to check this) The preview runs in The Walking Dead 147 which is out October 14th.
TSS: Is this your first major publisher comic, or have you worked on prior stuff we might know?
Nick: It's my first comic, I did a self published comic as a youth that is really awful and embarrassing. So it's pretty crazy to have a big book at Image right out of the gate. I guess I'm just THAT good right Steve? Steve??
TSS: Your style, which I love, isn't the traditional "comic book" type of art...was it easy to transition your art to tell this books story?
Nick: Thanks, yeah it was a little difficult to tune the frequency just right. This book is on the sketchier end of my style range, but it was definitely important to me to make it look lively and fresh, something different. It's a really good times for mainstream comics stylistically - a lot of exciting, diverse work being done. This style may have been a bit too crude in the past, but it seems to be evoking the desired reaction from people who've read the first issue.
TSS: I'm also curious as to what medium your working in not only on Ringside, but in general.
Nick:  Ringside is done digitally. I was living in Japan initially and it was just easier to do everything on a Cintiq as my room was pretty small. Finding the right 'brushes' was and still is a challenge... something with some life to the line. I draw Ringside really 'from the gut' though, so I didn't really need SUPER precision. Now that I'm back in New Zealand I've been mixing it up a bit more. Working on issue 4 right now, I've been inking 'traditionally,' (as traditional as inking over digital pencils is?) Sometimes I get tired of staring at a computer screen so I might pencil some stuff on paper too - just whatever feels interesting at the time.
TSS: Everyone has that dream gig. What would be your dream job to work on in comics?
Nick:  I guess if Pellejero wants to hand over the new Corto Maltese stuff I'd like to do that! Ringside pretty much is the dream project though, we can do whatever we want.

Joe:  A friend of mine had an interesting point about Image recently. He said, "if you're not doing your dream book at Image, you're doing it wrong." And I totally agree. So, that said, Ringside and Shutter before it are the dream gigs.
There's more to come. For me, creating new things with great collaborators across all genres and formats is why I made comics my life pursuit in the first place.
TSS:  What books are you guys reading yourself?
Nick: Right now I'm reading this manga series 'Homonculus', also reading 'Lastman', 'Sunny' and just got 'The Divine'. I read a ton of stuff ongoing though, from Image, Marvel, DC you name it - there's cool stuff being done all over the place these days.

Joe: Currently the majority of my gigantic "To Read" stack research for something which isn't announced yet, but I'm currently loving an anthology about boxing called At The Fights.
TSS:  Before we wrap, are either of you involved in any other projects you'd like to mention, and do we have any convention or book promo appearances fans (I'm sure this book will make some fans out of readers) can check out?
Nick: I'm not really on the convention circuit being in New Zealand, but I will at Armageddon Con in Auckland New Zealand October 23rd - 26th. I think my next US convention will be Emerald City Comic Con early next year. Otherwise I'm on Twitter @nick_sketch. Thanks Steve!