One of my favorite conventions to attend every year, Rose City Comic Con, is right around the corner, but this time it's extra special.
First of all, I'm dragging my sister and her boyfriend to their first comic con. The thing I'm most excited for is that I got the opportunity to interview my next subject, star of Marvel Agents Of Shield, Brett Dalton. Please enjoy, share, watch AOS, and follow Brett on Twitter @IMBrettDalton !! 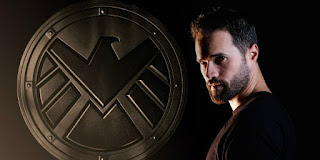 Steve Strout: Now that Ward is the head of Hydra, what can we expect from him in season 3?
Brett Dalton: Balloons. Streamers. And one of those inflatable dancing guys. All part of Hydra's rebranding efforts. I'm kidding. But this is definitely a new chapter for Hydra. Call it Hydra 2.0. We've retooled things. This isn't your father's evil organization. This is the newer, stronger, more streamlined version. And when we come back, look out.

SS: How exciting is the idea of currently being the "big bad" on the show?

BD: It's incredible. I mean, the bad guys always get the coolest toys and aren't afraid to use them. Plus, they're not led by the same moral compass, so you find yourself in pretty dark territory. Which is always exciting. But Bill Paxton set the bar so high Season 1 as the baddie that I'm just trying to keep up. 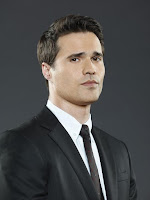 SS: Do you personally prefer playing the good or bad guy?

BD: I prefer good characters. Good guy, bad guy. It doesn't really matter. You want roles that show the king in the man. And the man in the king. The rest is just labels.

SS: Is the approach different? How different is your mindset when playing good Ward and Bad Ward?

SS: Did you ever envision yourself, as a young actor, being an integral character in the Marvel Universe?

BD: Never in a million years. And until Marvel Studios came along, you have to remember that most of the super hero movies were just awful. They were corny, looked terrible, and took themselves way too seriously. I never imagined the movies would become as smart and funny and just plain cool as they are today. And to be a part of that is just insane.

SS: Were you a comic book fan before you got the A.O.S. role?

BD: Very much so, but I always liked the outcasts characters. The ones that didn't have "the amazing" or "the uncanny" before their names. I'm talking about Deadpool and Carnage and Mojo and Death's Head 2. The weird ones. The dented cans.

SS: Do you see any characteristic parallels between Grant Ward and yourself?

BD: Uh, we both like board games? And dogs? I don't know. I think maybe we are both are sensitive guys at the end of the day, but you wouldn't know it just looking at us.

SS: Are you working on any other projects besides A.O.S.?

BD: I have a video game coming out on August 25th for the PS4 called UNTIL DAWN. It's a teen horror choice-based game that, in addition to having the most life-like graphics I have ever seen, features Hayden Panettiere (Heroes, Nashville) and Rami Mallik (Mr. Robot). And later this year, a film called "A Tourist" comes out, with Stana Katic (Castle) which is a very cool movie we shot in Florence about a brutal game called "calico storico." And next year, "The Resurrection of Gavin Stone" will hit theaters and you'll get to see me try my hand at romantic comedy.

SS: Let's chat a little about Rose City Comic Con, and conventions in general...How was your visit to Portland earlier this year?

BD: Well, Portland was extra special because so many of our cast members were there and that's always a blast. But also because two of our executive producers used to live there so they told us all the best spots to hit up. And we didn't pay for drinks the whole night. So we got to be rock stars (kinda) for a night.

SS: What are you looking forward to on this trip to the Rose City?

BD: The fans. The love, the hate, the theories, the predictions, the gifts, the woos, the boos. It's all about the fans who have spent their money and time just to share a little piece of their afternoon with me. I never lose sight of that. Plus, one of my favorite artists Jeffrey Veregge will be there!!! And I get to not only congratulate him in person, but say I knew him way back when.

SS: As I mentioned, you were here in the NW earlier this year, and we had a chance to chat a bit at the show, and I got a real sense of appreciation towards fans from you. What does this interaction with your fans mean to you?

BD: It means everything. That's why I go to these cons. It's the fans that make it all worthwhile. It's because of them that we have a show in the first place. And not only that, but a third season. It's why we push ourselves to do our best work. Because they're watching. Because they love this show as much as we do! 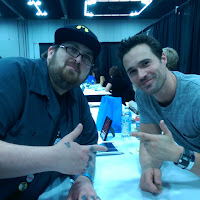 SS: Before I wrap up, I want to give you a chance to share anything you'd like. Maybe offer advice or plug a project or worthy cause?

BD: I think we got it all. Looking forward to seeing you and Veregge in Rose City. All the best.

Who else is gonna be at Rose City Comic Con in September? Be sure to say hi!