So, once again, it’s been awhile since I’ve been able to talk comic with ya and I blame myself and comics.  Went through a career change and frankly, not too much book wise has set me on fire… 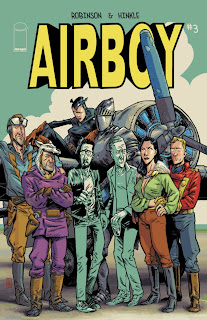 Image Comics’ reboot of Airboy, from acclaimed writer James Robinson (Starman) and artist Greg Hinkle.  Robinson takes his reboot approach from a very Charlie Kaufman/Harvey Pekar angle, writing himself and Hinkle into the narrative.  As Robinson self deprecatingly documents the downward spiral of his career and personal life, he and Hinkle have a Lost Weekend kind of night that culminates in Airboy literally appearing to them.  Originally a Golden Age character, Airboy is an aviator hero who leads a band of aviators in skirmishes against the Nazis.


Be warned: Robinson’s updates take features a “nothing is sacred” approach that deals in frank visuals of nudity, sex, drugs, and whatever other kinds of debauchery the pair can get into.  It’s the kind of shockingly funny that you should avoid if you’re easily offended.  With three issues now under its belt, Airboy has turning into one of the comics I can’t wait to read cringingly. 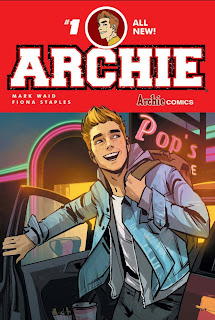 Not sure of you’d label this one a reboot, but I can vouch for Mark Waid and Fiona Staples’ fresh take on Archie.  I’ve given up gushing about first issues, but this one is simply too good to not recommend.  Taking a blank slate approach, Waid delivers an updated Riverdale, full of these beloved characters written in a fast paced story that pops.  Waid turns a timeless story into a page turner, and I think you can tell how much fun he is having just from reading it.  Staples, who somehow gets better with every passing minute, creates a colorful comic of which you cannot take your eyes off.  If you’re a stranger to Archie (look up the zombie filled Afterlife series), then this is a fantastic spot to jump on.

I’m about to dive into the first issue of Killen and McKelvie’s latest entry in their Phonogram series that dropped this week, so you really will be hearing from me soon!


Joe David Thompson has been doing media reviews for websites such as Red Carpet Crash and the 405 Music Blog. For any questions or comments for Joe David Thompson, you can email him at jovid52@me.com and follow him on twitter @jovid52
Email ThisBlogThis!Share to TwitterShare to FacebookShare to Pinterest
Newer Post Older Post Home