I don't know if you may or may not have followed the happenings surrounding last weekends Galacticon, but it got kind of messy. Galacticon was to be a celebration of the Battlestar Galactica franchise.
I'm not going too into detail, but there were a few major last minute guest cancellations that caused a lot of tension and disdain between convention producers and the guests which affected attendees. As mentioned, we won't discuss that too much.

What we will discuss is the hard work at the last minute by Galacticon staff to pull it together and put on a fun show, though scarcely attended. Kudos to the staff and amazing guests and vendors. I feel that celeb guest Jack Stauffer, who portrayed Lt. Bojay on the original BSG series sums it up well in this statement on Facebook:

Now that Galacticon 4 is behind us - - I want to give a shout out and say a special thank you to the volunteers and convention staff who worked their asses off under near impossible circumstances to get us taken care of and try an make the show a positive experience for those who showed up. From the beginning it was a logistical nightmare but every day they adjusted and simplified and compartmentalized so things went more smoothly. THANK YOU - THANK YOU - THANK YOU
AND - - we almost pulled it off. I know the BSG people and the old gang from Land of the Lost ( we were in the same area) went above and beyond to spend extra time with every fan.. The Cabaret for those who found that building (about 65) was a smash hit. Three or four of the actors even came over. Sarah Rush volunteered to be my producer. I entertained for an hour and twenty minutes with eight songs and multiple stories. Leah Cairns and Claudia Christian even told me after I needed to find a true producer and really market this thing - - a very nice compliment.
SO - to all the fans who rose above the disasters and came out - - I hope you had a great time. Ensuring that was the number one priority of all the actors who stayed on board - especailly Richard, Terry, Annie, Sarah, and myself. As I have always said, the only reason any of us maintain any sort of celebrity status is because of you. I hope we made it fun for you.
Looking ahead to 2018 which is the 40th anniversary - - I hope any opportunity to celebrate that milestone has not been destroyed. If a gala does go forward I can only strongly suggest it be put into the hands of a company whose primary focus is convention work and has the experience, staff and know-how to make it happen. SO SAY WE ALL!!!- Jack Stauffer (Facebook)

Speaking of Mr. Stauffer, He was gracious enough to do a quick follow up Q&A with us after the convention, since we didn't get a chance to chat at the show. Here's our chat about his appearances and what BSG means to his career:


Thestevestrout:  I believe I read somewhere that you haven't done any or very many of the conventions/ meet and greets. Do you see yourself doing more of these events after the Seattle convention?
Jack Stauffer: Actually I did many cons back when we were all younger and more prominent.  I was the only original cast member to help Richard when he made BSG The 2nd. Coming.  He and I went to many cons together between 1999 and 2004 promoting his vision for the new BSG.  The only reason BSG was remade at all was because of the tremendous fan support Richard generated.  Unfortunately instead of doing what the fans wanted the project ended up with Ron Moore who re imagined the original series.
As for me going to other cons in the future - - I will always go if somebody wants me and there is fan support.  I will say there is little demand as the show is now 38 years old which means we are 38 years older.  There are way too many newer shows featuring younger more prominent actors who are available.  The reason I have the cabaret and the theatre seminar is to offer different programming for a con.  As always if any of the fans would like me to attend a con in their area I urge them to contact the promoters and ask them to invite me.

What was the highlight or favorite part of your visit


The highlight of any con is the fans.  They are the only reason we maintain any sort of celebrity status.  We go for them.  As for me personally, I loved doing my cabaret.  I am an actor and an entertainer.  I love entertaining the fans.


Do you have any appearances coming up?
I will be at Crystal Coast Con in North Carolina Saturday October 17.  I will also be at the 2050 event in Daytona Beach over Halloween weekend.   December 11 - 13 I will be going back to Geekonomicon in Biloxi.  Normally I would not go back to a convention in succeeding years.  I am going back to this one specifically to do my cabaret for a huge USO show.

Any acting projects coming up, or what are you currently working on?
Old actors never die or fade away.  They always hope there is one more gig.  Mostly I direct local theatre these days paying forward what I know and love.

What did your BSG role mean to you and your career?
BSG was to me sweet and sour.  In the original script of the Living Legend 2 part story, Bojay was killed during the raid on Gammoray.  Half way through shooting Glen Larson told me  he wanted to keep Bojay on as a permanent cast member.  That was a huge conundrum as I was scheduled to do a 2 part Police Story immediately after BSG and had a half hour sitcom part scheduled after that.  Glen was relieved as he feared he would have a female mutiny if he added another strong male character.  The plan was to write me into a couple of scenes - which he did in the War of the Gods episodes  - and then when we started the second season, Bojay would become a regular character.  Unfortunately, we never made it to season 2.

As I mentioned prior, there were a few notable cancellations to the show, including the subject of my recent interview, Tahmoh Penikett, who by the way is promoting his new web series, Riftworld Chronicles. Its a hilarious series about a wizard played by Penikett, who is transported from another time and dimension to a modern city setting. Seriously if you haven't checked it out, I highly recommend it!! Here's a link to the series: www.riftworldchronicles.com

I brought along www.thestevestrout.com crew member and friend, Harold McKenney to shoot photos at the show (/H-Mckenney Photography). Harold is a fantastic photographer that specializes in cosplay photography. He managed to get a few photos at the show as well as other "related" off site events.

Getting back on topic...A couple of the cancelled guests, I was personally looking forward to meeting were Aaron Douglas and Nicki Clyne who were Chief and Cally on the BSG reboot.  The two decided to not let fans down, and on their own personal time and dime, still took the trip to Seattle to do non convention meet and greets of their own.

I brought along www.thestevestrout.com crew member and friend, Harold McKenney to shoot photos at the show (/H-Mckenney Photography). Harold is a fantastic photographer that specializes in cosplay photography. He managed to get a few photos at the show as well as other "related" off site events.

Aaron (yeah were on a first name basis now lol) did a "pub crawl" and kept tabs on Twitter as to where he would be hanging out with his fans. He signed and took pictures with the fans all day long around Seattle! The best part was that he did everything by donation with the proceeds going to these sweet little girls: https://www.facebook.com/seattlesmomma4transversemyelitis?__mref=message_bubble

The next day we headed out to Ballard for Nicki Clyne's meet and greet at Arcane Comics. She had a great turnout and was really sweet and engaging with her fans. We corresponded prior to the show and she gave me the ok to snap some photos of her signing and stuff, but I got so preoccupied chatting with her and the other fans that we took minimal photos. Here's a couple from the meet and greet: 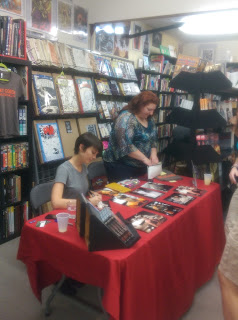 By the way...Arcane Comics is awesome! I wish I had a few hours to check out their shop more! They have a ton of stuff packed in that shop! Definitely going to make a plan to go spend a little time in that shop soon!

Even though there was a lot of negativity going in to the convention, some really cool stuff came from it, like the mentioned offsite meet and greets, and the outright camaraderie between the fans, guests, and new friends........Oh and this was pretty damn cool when they had a special ceremony to promote Leah Cairns aka Lt. Margaret 'Racetrack' Edmondson from Lieutenant to Captain. 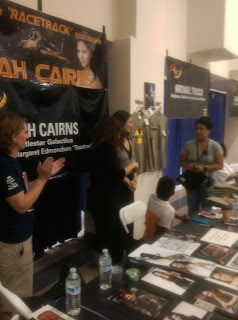 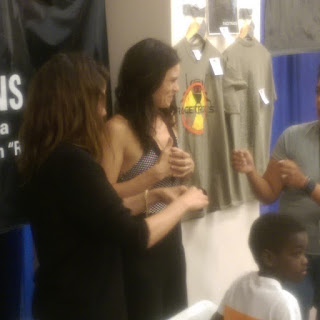 Though the negativity kind of killed my motivation to really cover things at the show, we still had a good time, made new friends, and feel like we got some cool stuff to share here with you all...Enjoy more pics... 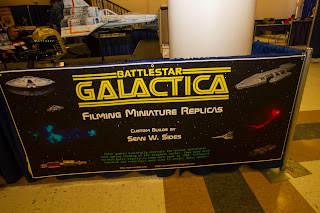 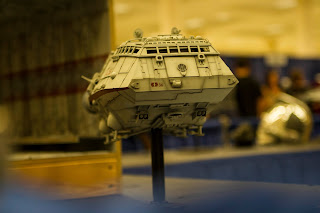 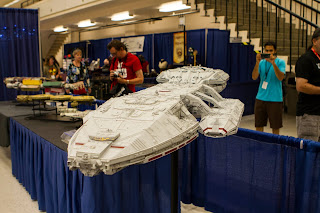 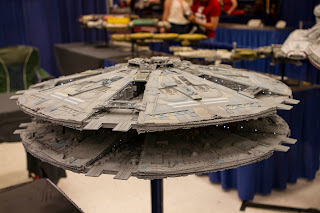 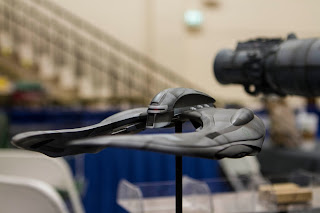 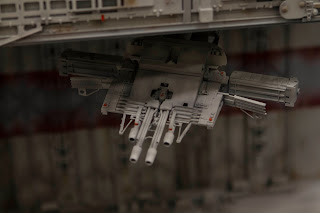 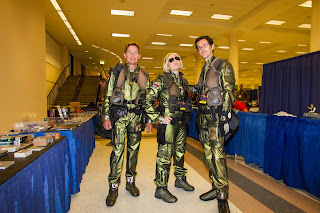 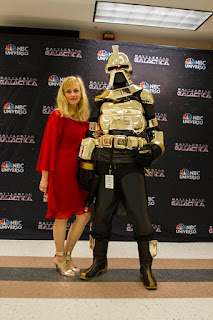 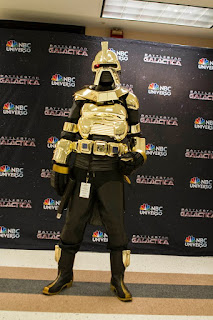 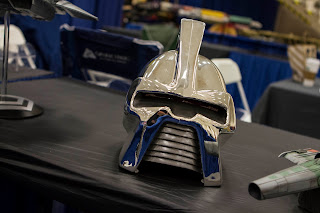 I'm tired, so I'm wrapping this up. Sorry this took so long to post (day job...paying them bills). So Say We All!