Our main review guy, Joe David Thompson, recently brought his family to the Marvel Experience touring show and wanted to review and share the experience! Sounds exciting to me! Enjoy, and check it out at a stop near you!

Review by Joe David Thompson
This past Christmas, we gave our Marvel obsessed daughter tickets to the Marvel Experience.  Dallas is the first major stop on the tour's run and tickets are affordable (more on that in a bit), so it felt like a win.  So we hit Fair Park in Dallas this weekend to see what kind of adventure was in store for us. 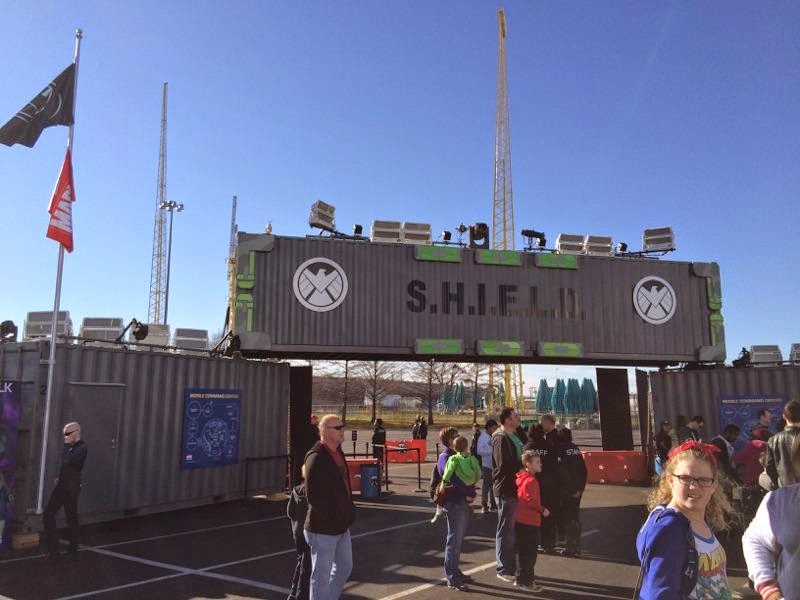 We were greeted by a compound like collection of seven large domes, each connected by pathways.  Our first stop was to one of the number of touch screen computers to register as an agent of SHIELD.  You give it some information, and it generates an agent ID card that is emailed to you (and you can buy for $10 at the end of the experience).  We were also given a black wristband containing the RFID chip, although that functionality wasn't available for our visit, which was a mild bummer.  I heard there were issues with the tech, which prompted the tour to a short postponement, so hopefully this functionality will be in effect soon.
With the busy work out of the way, we joined the line, after posing for a souvenir photo op, and were soon led into the first of the seven domes and begin to be immersed in the story.  We learn that Earth was under the attack of a robot able to replicate the powers of the Marvel heroes, dubbed a Super-Adaptoid by Spider-Man.  When the Super-Adaptoid was destroyed in the sky, wreckage and shrapnel scattered over America.  As potential recruits, we were tasked with completing our agent training and sifting through the wreckage to learn more about this threat. 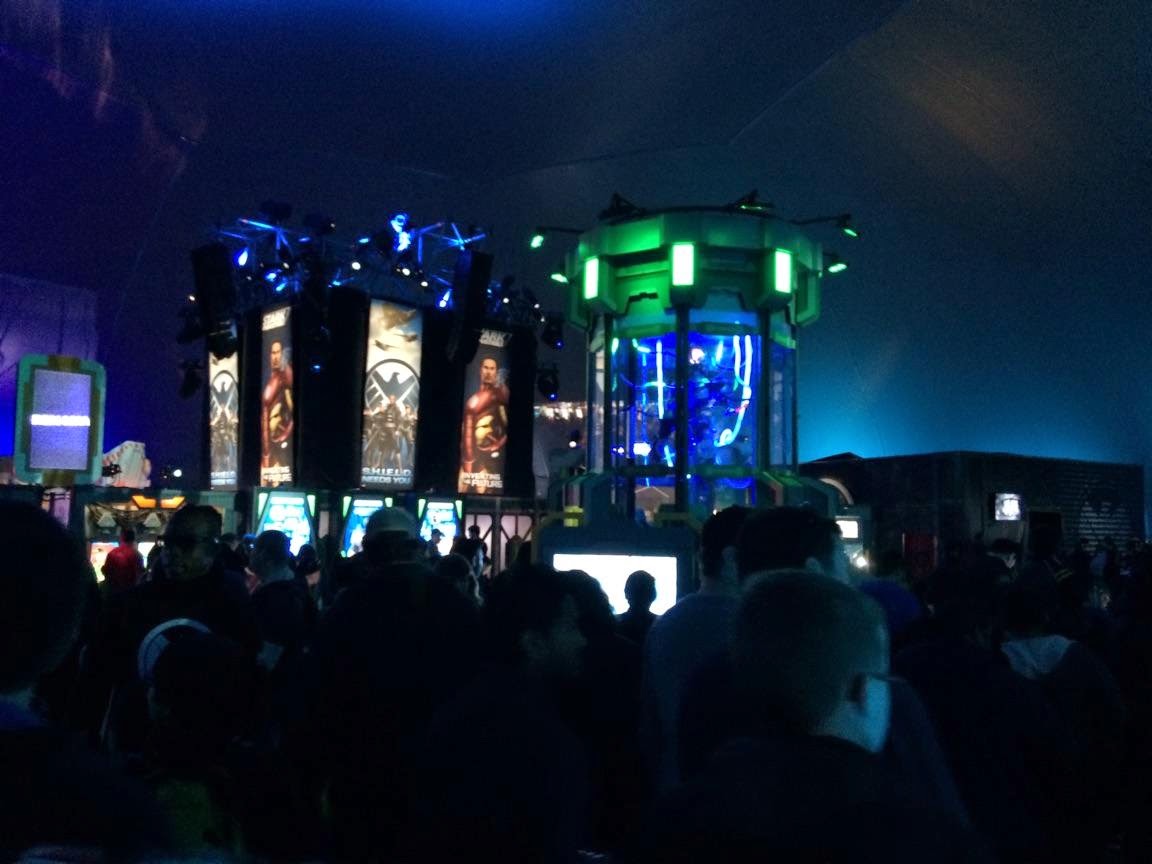 From there, we entered the fourth dome, which is the largest and arguably the one where you'll spend the majority of the Iron Man helmets, Loki's specter, or Black Panther’s scythe.  The remainder of the open space is filled with different games: a Spider-Man themed rock climbing wall where you chase Venom up the side of a building, the Black Widow agility maze where you navigate lasers in a small space, and a favorite of our daughter and friend, the Avengers Encounter, where you can summon a virtual hero for quick photo ops.  The Holo-Blasting Training Simulator is a theater that holds around 24-26 people at a time where you use special guns outfitted with sensors to practice shooting and web slinging.  And there are two Kinect type games where you can smash things along with Hulk or pilot the Iron man suit through a canyon.  However, these last three experiences I can't really speak to as we never got a chance to try them out, which brings me to my biggest problem with the Marvel Experience: the crowds. 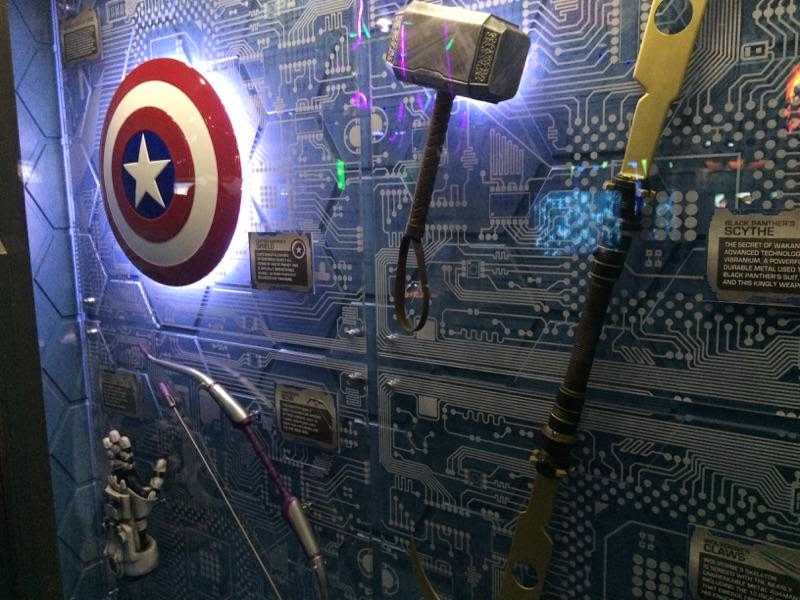 It's no surprise that this is a popular attraction.  To that end, the event is structured around a time schedule, where attendees begin the experience at thirty minute intervals.  Our tickets were for ten that morning and we entered the main dome just a little past 10:30.  At this point, the crowd was minimal, but mere moments later the Holo-Blaster, Iron Man flight, and Hulk smash lines were fit to burst with long wait times.  Event staff tried to accommodate this in some areas by encouraging anyone standing around to continue onto the next part of the experience, so, in the case of our Black Widow line, only allowing people to enter in pairs.  Still, the lines were discouraging and our girls decided to not do some things rather than wait.  There is an option if you wish to avoid these lines, which is purchasing the VIP tickets, which, among other premiums and swag, allows you to skip to the front of all lines like a Fast Pass at Disney.  This wasn't an option for our humble budget, so we missed some of the experience as a cost.  Just something to consider when buying tickets.
It also bears mentioning the incredible staff working our event.  For the majority of our time there, each person we came into contact with remained "in character," calling us agents and doing their part to support the "experience" part of the Marvel Experience.  Only a few times did this fall flat, such as the staffer who went around encouraging us to move on when we were faced with long lines, or, during a pivotal tense moment in the Experience's narrative, a staff entered one of the walkways through a side door and shattered a bit of the illusion.  Timing is still everything... 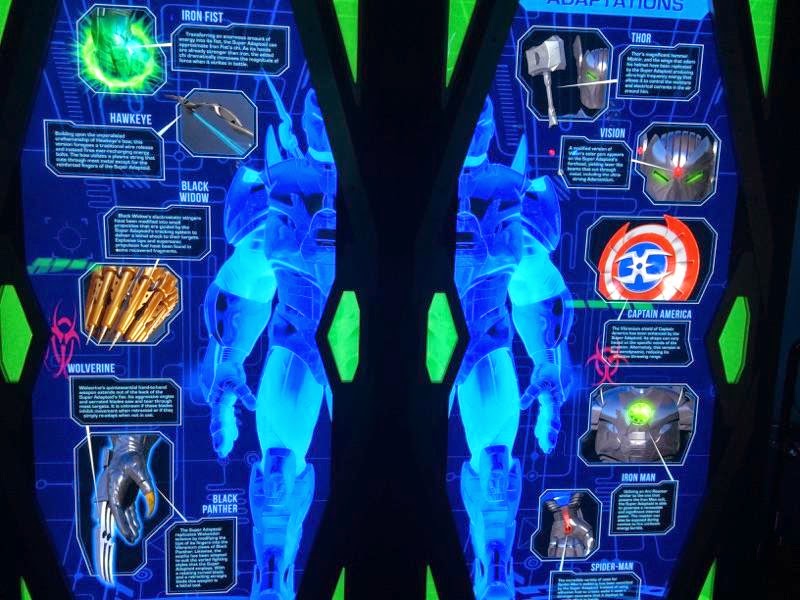 I had to constantly remind myself that the Marvel Experience is targeted WAY more towards younger fans.  Our girls were close to thirteen and had a great time, as did all the younger kids there, due in large part to the staff.  Still, there are moments when the storyline is supposed to be tense, and at the same time, that pauses so we can be shuttled into another room.  The larger issue with this is that most of the tech and props that tell the story is way too visible between domes, so we truly can "see the strings" being pulled behind the illusion.  I'm not talking about sharp eyed visitors who look for them, just walking from one dome to the next only requires a turn of your head to dispel the atmosphere.
Now I already mentioned our daughter has a Marvel obsession, along with other notable geeky loves, but her Marvel interest has always skewed towards the movies.  The books are so stepped in an extremely rich universe that entry points are hard for her to come by (although we're going to try Captain Marvel next).  The Marvel Experience takes strides in bridging that gap between book and film fans by incorporating characters that haven't been in the films, such as She-Hulk and Iron Fist, as well as one with a movie coming soon, Black Panther.  There's plenty of opportunists to learn more about these characters' origins throughout the fourth dome as well as a "secret files" section, full of comic covers from across the years. 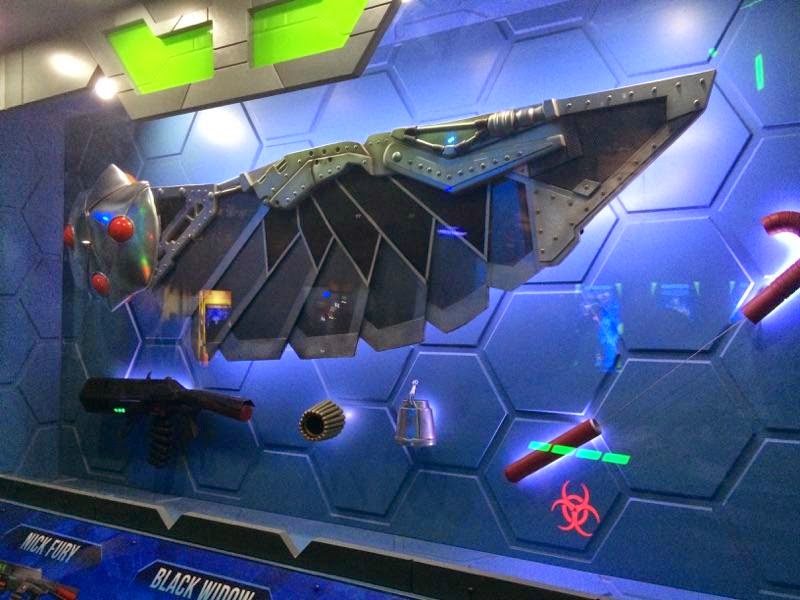 My criticisms are truly minimal about the Marvel Experience.  None of these left our party with a bad impression, save for the bummer of not getting to do all that was available in the training room.  In fact, the girls raved about it to anyone they came across that afternoon.