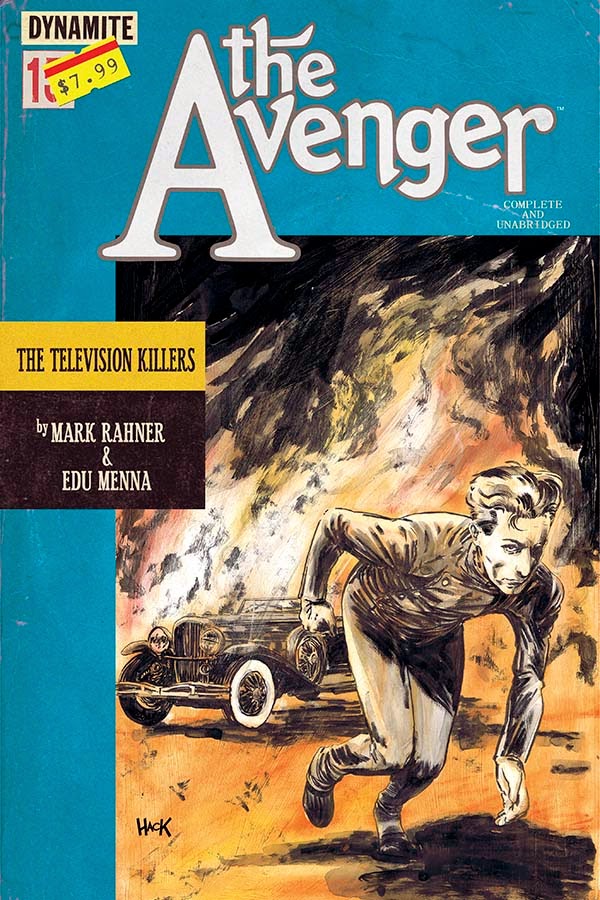 Review by Joe David Thompson
With a deep nod to pulp magazines, Dynamite Entertainmet released a new Avenger special starring Richard Benson ("The Avenger" or "The Man of a Thousand Faces") and his Justice Inc. crew.

Titled "The Television Killers," writer Mark Rahner (The Twilight Zone, Army of Darkness/Reanimator) blends a tale of sci-fi horror with a more human tale of racial violence and unrest.  The result, for me, is what equals an uneven reading experience.  Rahner leads with what is a wonderfully sensational tale of ordinary citizens turned into cannibalistic maniacs.  Rahner thankfully skips the easy route by avoiding zombies and tracing the switch to the rise of a very important technological development.

It's a great idea that would feel right at home on a Twilight Zone or even Doctor Who episode.  It's also an idea that seems to stay woefully underdeveloped, deferring to the secondary tale of the book that also overshadows what should be the main plot of the book.  In this story, legendary singer Billie Holliday enlists the Avenger and Justice Inc. to help protect her from the threats as racial violence.  Holliday is set to debut her powerful new song, "Strange Fruit," on television, something that could be so subversive that a group of racists will stop at nothing to prevent the broadcast.

What we end up with in this case is a book that feels uneven, even with the tenuous link between the two stories here.  As the Avenger gets more entrenched in Holliday's story, we never quite sense the urgency for resolution in the "zombie" tale.  Racism and racial violence is such strong subject matter that we're hardwired to care more about that outcome.  I feel like there are two potentially good stories here that belong in separate books.

The art has a certain cartoonish quality that also doesn't feel quite in line with the racial story, but Edu Menna shines when capturing the bigger scenes of cannibal crowds and giant robots.  Adriano Augusto's rich colors pop on every page.