We Interview Actor David Dastmalchian About His Count Crowley Comic 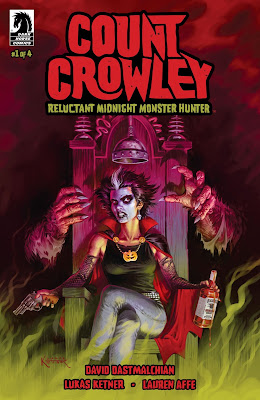 Dastmalchian, recognizable by our readers for roles in the Ant Man movies, The Dark Knight, and Gotham, grew up as a fan of creature feature and horror hosts, eventually leading him to writing Count Crowley, of which Dark Horse Comics couldn't have released with better timing, with thestevestrout.com's Horror Host profile series just wrapping and legendary host Svengoolie appearing in a comic book crossover via DC Comics.
Dastmalchian's comic book debut (featuring the art of Lukas Ketner), which comes off as a book written by a veteran comic scribe, is discussed with me in this interview about Count Crowley. Not only do we discuss the book, but we talk about life, his love of horror hosts, and a big upcoming role that I'm personally excited about! Check it out, and consider adding the Count Crowley mini series to your comic book pull list.
TheSteveStrout: How would you summarize the Count Crowley comic, in your own words?

David Dastmalchian: Imagine if you’d burned every bridge in your life. You had been the “boy (or girl) who cried wolf” for so long that no one believed or trusted you anymore.  And then imagine you suddenly realize that there’s a flesh eating creature under your bed and it’s going to eat everyone that you love if you don’t warn them and defeat the monster… this is kind of how it goes for Jerri Bartman. She’s been hitting the booze so hard that no one believes her or will take her seriously anymore. She’s been relegated to hosting the “Creature Feature” which is really embarrassing for her. She wanted to be a serious journalist. But suddenly she makes the most important discovery of all…

TheSteveStrout: How long have you been developing this story, and how long did it take from initial inception to going into print with Dark Horse? 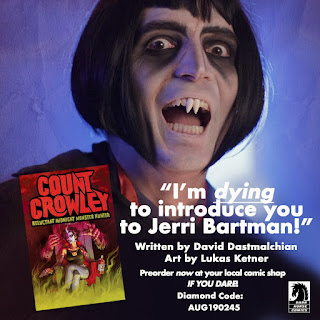 David Dastmalchian: I’ve been dreaming up this idea since I was a kid in Kansas City watching one of my early icons, the great Crematia Mortem (Roberta Solem) on “Crematia’s Friday Nightmare”.  She was the best and introduced me to all of the monsters and horror films that I love. As I grew older and confronted my own demons and monsters, this story began to really take shape. I think that when I got clean and sober 17 years ago, I KNEW I had to do this. I spent a lot of time imagining the characters, conditions and plot lines that would be meaningful for me to create. I hope that readers find them entertaining and meaningful, as well.

David Dastmalchian: Crematia, for sure!  And Svengoolie and Vampire and many more legendary horror hosts. My love of Universal, Hammer, Castle and other classic horror films was a big influence. The classic EC and horror comics tradition was a big inspiration. And underneath it all is my own perplexing battle with the bad monsters of earth.  I believe there are “Bad” and “Good” monsters and I want to help destroy all of the bad ones. I also battle my own internal demons like my struggle with depression and addiction.

TheSteveStrout: How did working with Lukas Ketner come to fruition? Was there already a connection before going to Dark Horse with the story?

David Dastmalchian: I am such a massive fan of his work on Witch Doctor and then I explored his other art and was just continually blown away. After looking at all of the photo references that I’d assembled and reading my scripts, my editor (Megan Walker) suggested Lukas and it was a brilliant suggestion. He has helped bring Jerri and the world of Count Crowley to life in a way I never imagined possible.

TheSteveStrout: I'm personally a big fan of "Horror Hosts", having done a month long series of profiles featuring active hosts, including your personal friend and a favorite of mine, Svengoolie. When and what was your first exposure to the "horror host" genre of performing art?

David Dastmalchian: Crematia Mortem on what used to be a Fox station in Kansas City!  I would enter all of her contests and watched her show religiously. She was the coolest thing in the world to me. I’m lucky to call her (Roberta) a friend now and she is very excited about Crowley!

TheSteveStrout: Did the friendship with Svengoolie (Rich Koz) help with the "horror host" character development in any way?

David Dastmalchian: Absolutely!  Rich is a legend and what he’s done with Sven is something that really inspires me. He entertains millions of people while still introducing us all to classic horror movies and his reverence to early fright cinema (as well as comic books and more pop culture) is marvelous. I’m so happy that DC is featuring him this fall in Svengoolie meets the DC Universe!  Everyone has to go out right now and buy every DC comic that has part of the Sven story in it!

TheSteveStrout: For the marketing campaign, you portrayed a horror host of your own in Doctor Fearless. Did you develop the idea and character yourself?

David Dastmalchian: I have always wanted to be a horror host and so the closest I’ve been able to come is my creation: Dr. Fearless. I pitched the idea to the marketing team at Dark Horse and they were totally supportive. Kelly Woessner from Dark Horse came down and we did a very DIY shoot with props from my attic!  We used the amazing new theater that the Bob Baker Marionette Theater just took over in Eagle Rock. My friend Collin Schiffli directed, the great DP Bongani Mlambo shot it and my friend, Kelly Goldsack helped me with the Dr. Fearless makeup. It was just like when I used to put on haunted houses in my basement as a kid. One of the most fun days of work I’ve ever had!

TheSteveStrout: As for acting, you have taken a few comic book based roles, including the upcoming Suicide Squad sequel (which I'm really excited to see what James Gunn does with it). Between that and you actually writing a comic book, would you consider yourself a "nerdy type”?

David Dastmalchian: I am a proud geek!  I love comics, sci-fi, horror, toys, collectibles, podcasts, all of it!

TheSteveStrout: What's next for you besides the Suicide Squad movie? Any plans to write more comics?

David Dastmalchian: I got to work on the new film, Dune, from Denis Villeneuve which is something that makes me very proud and happy. He is a brilliant and that book changed my life - I can’t wait to see what he does the film. I worked on a very cool new Hulu show called Reprisal. I would honestly love to just get to spend more time writing Count Crowley and show readers where Jerri is going.  I hope that people respond to these first few issues so that I get the green light to do it!

David Dastmalchian: Thank you for reading Count Crowley and please be sure to share any photos of fan art or cosplay on social media by using the hashtag #CountCrowley


Thanks to David Dastmalchian for taking time to chat with us. Be sure to visit your local comic book store and pick up a copy Count Crowley #1, and add the series to your subscription list. You can slso grab a copy at www.darkhorse.com!