As you've probably noticed, I've been putting out the call for guest posts promoting and sharing your experiences at your favorite comic, toy, collectible, gaming, anime and geek shops here at thestevestrout.com. I caught wind of our friend, writer, and fellow geek, and recurring guest here at the site, Josh Cook takin his family on lots of nerdy excursions as of late, so I told him about this idea for the new feature. He loved it and jumped right in with this post about his trip to ANOTHER CASTLE ARCADE in Edmonds, Washington. This place sounds fantastic. Check out Josh's account from his day out with the fam! Thanks for reading, and if you would like to share your favorite geeky shop or destination, let me know.- Steve (@thestevestrout)

So, here we are a month later and I am finally sitting down to write. The problem is that there is just WAY too much free and cheap things to do with my kids over the summer – a crazy TV addiction that I just don’t want to kick. Every day is another day-long adventure around the area hitting events and movies, and more… Oh my! 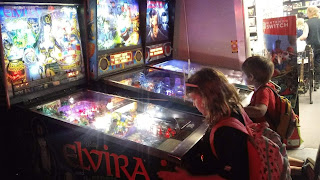 When looking for things to do, I found out we actually have an arcade nearby. Another Castle: Arcade Edition in Edmonds is the flagship location for this local chain of video game stores. The unique idea of this chain is to offer an old-school arcade alongside their used video game shops. While not all of their locations are Arcade Editions, they have at least three that are, though none seem to have the selection of the Edmonds location. 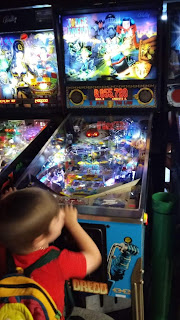 From the outset, Another Castle gears you up for the awesomeness inside. The outside features street-style artwork from a number of classic video games on the walls. A giant Bowser spitting fire is surrounded by a pixilated Mega-Man scene and an alien from Space Invaders on this crazy mash-up of video game nostalgia, which does tend to go heavy on Super Mario and Nintendo imagery. To add to the Mushroom Kingdom ambiance, there are stools and seats painted to resemble mushrooms.

I would like to note that you will see beer signs that will make you think you’re walking into a bar. You are not. I took my kids who are 5 and 8, and when I saw the beer signs and ads outside the arcade section, I was a bit worried they couldn’t go. After debating if I was going to leave them outside for hours while Daddy played video games (I joke…maybe), we walked into the video game section and asked if it was all ages. They assured us it was all ages, they simply sell beer, beverages, and snacks on the premises.

Inside the video game store is a well-stocked new and used video game shop. Not a lot to say here, but it should be noted Another Castle does feature a strong classic video game selection. You can find games from current systems, past systems, and even classic consoles and games like Atari systems and more. The arcade is attached and only separated by large garage doors that are pulled once the game shop closes. 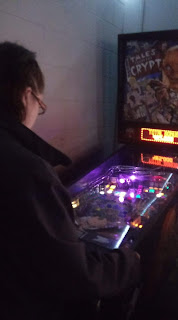 The arcade is large and easily covers more than half of the building space. It’s dimly light and the beeps and boops of classic arcade games can be heard in that euphoric chaotic symphony of the classic arcades. The machines all take actual QUARTERS (remember those?) and generally only take one or two. The area is kind of split into two sections, separated by the concession stand and a table or two. I can’t speak to the concessions as I spent all of my cash on the arcade machines, but you can find an assortment of snacks and such to help you game into the wee hours of the night. There is music playing featuring uncensored modern music. If you’re a parent that is worth noting, but I did not hear anything that made me grab my kids and run out screaming.

One side of Another Castle: Arcade Edition is packed with mainly classic and vintage arcade games and machines. The machines are all original and date back years and decades in release dates. The actual titles and machines change regularly, but there are always a huge selection of truly classic games to play. My kids surprisingly fell in love with Frogger and spent a lot of our cash on that one game. The biggest and newest games here are an older version of DDR and dual Mario Kart arcade machine. 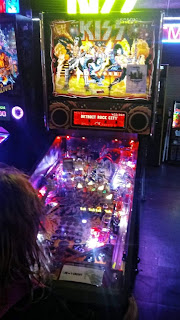 Another popular hit with my little crew was the Nintendo Playchoice 10, which was released by Nintendo after making history in the home gaming market. The machine features ten different NES games that can be played for a certain amount of time. So for one quarter, you can pop around from game to game and try them all, though the time they give you is not nearly enough for much game hopping. On this machine, they have amazing titles like Super Mario Bros. 2 and 3, Contra, Double Dragon, Chip and Dale Rescue Rangers, balloon Fight, and a few others. 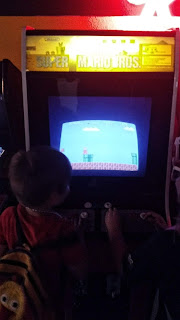 The other section is packed with mainly pinball machines along the walls. Scattered in the center are some tables and chairs and multiplayer tables like Pac-Man Royale. This is where all of the action takes place during their weekly pinball tournaments. The pinball tables cover the gamut on themes and properties from comic books to movies and everything in between.

A throwback to the days when arcades were the thing, Another Castle: Arcade Edition in Edmonds is definitely a geeky place to hang out with friends, family, and random strangers off the street.

Check out my other posts on The Greatest American Hero and Do Comic Movies Impact Book Sales? and share the geek love with me. 😊

Get more info on Another Castle: Arcade Edition, and the regional chain of gaming shops and arcades at www.anothercastlegames.com/

As a writer and social media consultant, I have been fortunate to have the opportunity to help protect our planet. Working with lawyer and activist Joshua Douglass, I am raising money and awareness to combat the Dutchess Valley (NY) power plant from being built without concern for the local and greater environmental impact. We ask that people please visit and share this fundraiser from him author Frank Mancuso https://www.gofundme.com/f/make-nys-green. - Josh Cook
Email ThisBlogThis!Share to TwitterShare to FacebookShare to Pinterest
Newer Post Older Post Home