We checked out Bathtubs Over Broadway at the PTFF...

The Port Townsend Film Festival has come and gone but one film will last, at least with me personally. Bathtubs Over Broadway. 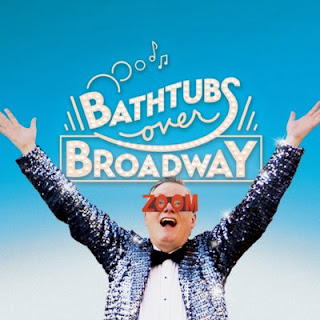 In the documentary, Bathtubs Over Broadway, we see Steve Young (joke writer on David Letterman's late night show and co-author of Everything's Coming Up Profits - The Golden Age Of The Industrial Musical) initially use Industrial Musicals as joke material, only to become something more than just a gag.

An Industrial Musical is basically a production put on for employees of corporations and businesses to motivate productivity and sales.

We follow Mr. Young and his journey across the country in search of the musicals and performers. You see, these musicals were not intended for the general public's viewing. They were only produced for employees of these businesses. Few of these performances were recorded, and distributed minimally on lp's. These recordings became sought after by Mr. Young, leading him on this adventure to collect as many as possible.

His journey not only opens the door to this unique side of the entertainment and performing arts business, but opens us up to the history and performers of this obscure sub-genre of stage musical.

We meet a handful of interesting characters, including notable appearances from Martin Short, Jello Biafra, Florence Henderson and more...

This film offers us an interesting view and history lesson from a golden age of industry and performing arts. Bathtubs Over Broadway is currently doing the festival rounds so find it at a festival near you.

Check out this teaser from Tribeca Film Fest about Bathtubs Over Broadway!

I hope my ramblings made you want to see this movie! You can find more info on the documentary, including upcoming screenings at www.bathtubsoverbroadway.com