This latest edition of "Cool Projects" will spotlight a few upcoming comics from various publishers. Some ongoing and some new. Check em out! 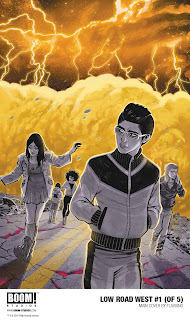 Low Road West is a sci-fi/supernatural limited series by the creative team of Phillip Kennedy (Eisner nominee ,The Power of The Dark Crystal, Aquaman) and Flaviano (I Am Groot, Spider-Man/Deadpool) on the Boom Studios imprint, an is set to hit shelves in September. 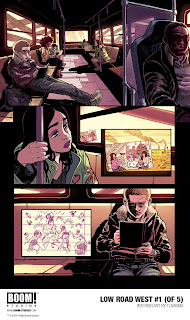 Low Road West is is the story of a group of young refugees trying to escape to the west coast, away from the war torn east coast of the U.S., only to end up in an Oklahoma ghost town, where they cross a whole new array of problems, forcong them to figure out how to survive together.

Get more info on Low Road West and other great titles from Boom Studios on Twitter: @boomstudios

Valiant Entertainment is bringing another Bloodshot series too! Check out this recent press release from Valiant!
Via- www.ValiantEntertainment.com 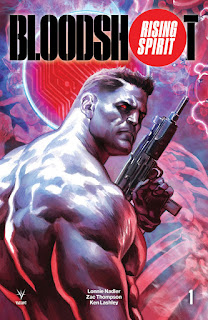 BLOODSHOT RISING SPIRIT #1Written by LONNIE NADLER & ZAC THOMPSONArt by KEN LASHLEYCover by FELIPE MASSAFERANEW ONGOING SERIES! DISCOVER THE TRUE ORIGIN OF VALIANT’S MOST UNRELENTING HERO!Before a weapon is deployed in battle, it must be designed, refined, field-tested. Bloodshot was no exception.In the early days of the private military contractor Project Rising Spirit, the nanite-infused super-soldier who would one day become their most violent and valuable asset was a resource to be mined – and it was up to one enterprising employee, the “Memory Weaver,” to ensure he did what he was told. But a memory is a tricky thing…and the man Bloodshot used to be won’t let go of his past so easily…Critically acclaimed writing duo Lonnie Nadler and Zac Thompson (Cable) team up with distinguished artist Ken Lashley (Black Panther) to open a door once closed and reveal answers to questions that Bloodshot himself would never think to ask!ONGOING SERIES | BEGINNING NOVEMBER 2018 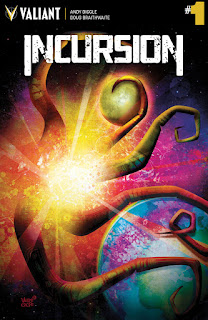 Early next year, Valiant is also bringing us an intriguing series entitles Incursion. From what I grasp from the latest press release, its about a region called the Deadside, where our departed souls linger on, and alien worlds from other dimensions colliding with our own. Sounds pretty wild and intriguing to me.

Even more so, knowing Andy Diggle and Doug Braithwaite are the creative team behind this project. I was already sold by the teaser image from our good friend here at thestevestrout.com, Jeffrey Veregge!

Stay tuned for more, and if you would like to contribute to this site, get in touch through our social media profiles...