Crypticon is right around the corner, so lets preview Seattle's horror convention with a Q&A with one of the awesome artists at this year's show, C.D. Poe! To be honest, this was one of my favorite interviews, not only because C.D. Poe is a good friend and one of our favorite artists at the #ComicBookSwapMeet every year, but because his art is so unique and creepily beautiful! He also gave some really great enthusiastic responses! Check it out. Share it. Come say hi at Crypticon, and go show C.D. Poe some love on his social media outlets at www.cdpoe.com and www.facebook.com/cdpoe1031 You can also buy art from his shop at cdpoe.storenvy.com.


TheSteveStrout: For those unfamiliar with your art, how would you best describe your style? 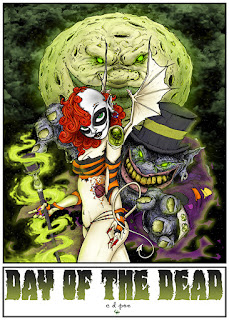 C.D. Poe: It's hard to describe my style. I hear from folks repeatedly that it’s "unique". I assume that's a good thing. I can tell you what things I dig and, as a result, influence me. I love myths and legends, epic fantasy stories, comics and anime, and horror movies. I’m also a big fan of both classic and contemporary pin-up artwork. The likes of Gil Elvgren, Earl Moran, Olivia, and Luis Royo, to name a few, leave their mark on my work. I like to think all of those things churn around in the dark recesses of my cranium and help shape what you see.

TheSteveStrout: Tell us a little about your background. Any formal training like art school or anything?

C.D. Poe: Nope. No formal art training at all. I took a semester of art as an elective in high school, my junior year, and that’s it. It was pretty free-form, though we did some projects focusing on perspective, juxtaposition, negative space, yada-yada. Everything I do is self-taught and LOTS of practice. I see a technique or style I like, and I’ll try to emulate it. I’ll Google™ the hell out of stuff, find art tutorials, videos, what have you. I was REALLY lucky 2 years ago at ECCC and picked up a whole set of Brian Haberlin’s inking tutorials for free during a raffle drawing at his booth. For those not in the know, Brian Haberlin is THE digital inking guru… he was doing digital inking in the mid-90s when very few were doing that stuff. He’s working on Marvel, DC, Image, you name it, and has his own productions coming out of his studio. This was a massive help since I now do most things digitally.

TheSteveStrout: You've been picking up steam on the convention scene here in the northwest. What do you personally gain from doing these shows (besides the obvious money for art)?

C.D. Poe: I think the thing I dig the most is the interaction with people. This is weird for me to say because I am NOT a people person. Coffee helps. I like talking to folks about my art, hearing about where there interests lie, and generally getting my geek on with them. I get to meet a lot of new people in the industry, independent artists and those who work for a publisher as well. Many I’m happy to now call friends, like Robert Tritthardt and Ryan Fisher, both of whom I met at ECCC several years ago. I’ve been able to watch them grow and progress, and as a result, I’ve grown a bit as well.

TheSteveStrout: What will you be offering at Crypticon next weekend?

C.D. Poe: I’m hoping to have at least one new print inspired by a rather new-to-the-mainstream-but-very-old Christmas legend, the Krampus. My Dad’s side of the family originally hailed from the Austria/Bavarian regions of Europe, so I grew up with the Krampus tale. Thanks to a wonderful flick “Krampus” (2015), many more are familiar with his shenanigans. This print will feature the Krampus and one of his “helpers”. It will be available in both PG and R rated versions. I may also have another new pin-up print called “Water Priestess”, but we’ll have to see on that one. I will have a pinup print inspired by Day of the Dead, a print with a character of my own creation, The Nightmare Childe, and a newer one called Daemonium Et Cherubim. Finally, I will be selling some of my original art for the first time at this show, so that’s exciting for me.

TheSteveStrout: Is this your first time at Crypticon as an artist or fan?

C.D. Poe: Yes and yes. I had an opportunity to go to Crypticon several years ago, but things fell through and I wasn’t able to make it. I’m very excited to not only debut as an artist here, but hope to get out a bit here and there to take in some of the sights. I’m very excited about a couple things, but I’ll wait for the next question to gush about that…

TheSteveStrout: Are there any guests, vendors, or artists your excited about at the show?

C.D. Poe:…And so now I’ll gush. I’m a HUGE fan of Lance Henricksen.  “Damien: Omen II” (1978), “The Terminator” (1984), “Aliens” (1986), “Near Dark” (1987), “Pumpkinhead” (1988)  and a lesser known flick “The Pit and the Pendulum” (1991) based VERY loosely on Edgar Allan Poe’s story of the same name. More recently, he appeared in a flick on Netflix called “Harbinger Down” (2015), which is a great body-horror movie, reminiscent of John Carpenter’s “The Thing” (1982). As an “X-Files” fan, I was also an avid “Millenium” fan. Anyway. I’ve always enjoyed his performances, and I’d be tickled just to shake the guy’s hand and thank him for decades of entertainment. I’d be even more tickled if I got to see him walking by and just got to casually chat with him. “Pumpkinhead” is probably one of my most favorite of his; as a Halloween childe, this one really resonates. The ending isn’t very typical of “good wins over evil” in the horror genre. It’s more of a combination of “be careful what you wish for, you might get it” and “you might win, but it will be at a terrible price”. It’d be kind of neat to meet Cassandra Peterson aka Elvira, for grins and giggles. So, yeah, I’m kind of excited.

TheSteveStrout: Back to talking about yourself... Over the last year you ran a crowd funding campaign to publish your adult fantasy/monster coloring book, and your art has been used for some local companies. How have these projects helped your art and career? 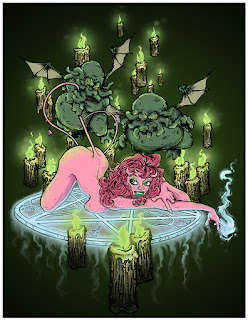 C.D. Poe: Wellll… heh. I don’t know that it’s really helped or hindered. I put the book out in a very small batch, only printing about 100, back in October 2015. I still have some copies, and am looking to re-print sometime in the next 6 months. This time, it will be a “real” book with an ISBN number, so it could be sold in retail outlets. That’ll be a larger print run as well. I’m still trying to work on “getting the word out” and leveraging my social network and website resources. I think the most recent job I undertook, reimagining the designs for a local ice cream company (shameless plug – Viking Feast Ice Cream at vikingfeasticecream.com and check out their Facebook page!), has been a big boost to my confidence. It may not have increased awareness of me as an artist, but there’s something kind of neat when you go to a store and see a product with your artwork on it. It’s inspired me to get off my ass and start working more consistently on the things I want to do with my art. That is probably the biggest impact these projects have had on my art career, such as it is.

TheSteveStrout: Any other projects in the works that can be mentioned?

C.D. Poe: Hmmm. I don’t want to jinx myself, so I’ll be annoyingly vague here. I have a tendency to talk about stuff and how awesome something is going to be, and it either a) falls through or b) doesn’t even come close to happening the way I want it to. Both are all on me, let me say that right up front. So, that being said, I am in very early discussions with someone that may lead to something which could be my very first foray into the comic book world. How does that sound? There’s another longer term project, like 2-3 years longer term, that I’ll mention in general terms (again, for the reasons above). I’ve had a vision for 20+ years of taking some of my poetry I’ve written over the years and coupling it with my art. It would be a coffee table book of sorts. A good example of this would be “Hidden Lyrics of the Left Hand” by Glenn Danzig. He took lyrics from his Misfits, Samhain, and Danzig songs, and collaborated with the oh-so-awesome Simon “Biz” Bisley. The layout is simple – the song lyrics on one side, and an awesome piece of Biz artwork to go with it. So. That’s what I’m doing. 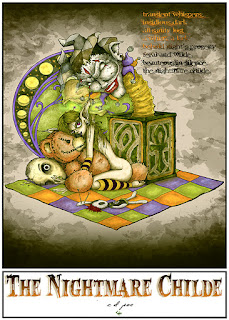 TheSteveStrout: Who are some creators that inspire you?

C.D. Poe: From my formative years in high school til now, I’ve always been a big fan of Brom. His works are just amazing. I had the absolute honor of meeting him at Jet City Comic Show some years ago, when it was first over in Seattle. I met both him and his lovely wife, Laurie Lee Brom, who is also an amazing artist. I recently contact him via Facebook about incorporating a piece of his into my Krampus pin-up I’m working on. He was very gracious and granted me permission to use one of his Krampus images. He then said he’d love to see the piece when it’s done (!!!!). If you told high school me that Brom would one day a) grant permissions to use some of his imagery in my art and b) he’d want to see it when it’s done, well, I think high school me would just scoff. I’m also greatly inspired by many of my friends who are independent artists pushing forward and creating on their own steam – Robert and Ryan, who I mentioned above, and my San Diego pal Erik Arreaga, to name a few. In this day and age of superhero comics/movies/TV shows becoming more mainstream, they strive to create original content that is both entertaining, inviting, and original. Props to my peeps!

TheSteveStrout: What are your dreams and goals as an artist?

C.D. Poe: I just want to keep creating what I want, when I want, how I want. If I “make it big” with something at some point, great. If I don’t, great. I just want to create art that speaks to me, honors those that inspire it, and keep on keeping on.

TheSteveStrout: Is there anything you would like to add or plug? C.D. Poe: You’ve covered everything pretty well. After Crypticon, I’m not really doing anything until the fall. I’ll be doing Central City Comic Con in Yakima on Oct 14-16 and Jet City Comic Show in Tacoma on Nov 5-6. I’m going to use the break over the summer to focus on the above mentioned projects, continue to develop my style/technique, and see how things develop from there. Thanks for the opportunity to speak to you. Cheers!

Hope to see some of you at Crypticon. For more info go to www.crypticonseattle.com