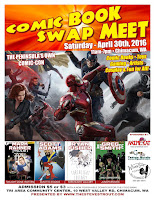 The Comic Book Swap Meet, our mini con here on the Olympic Peninsula, has come and gone. We did some good things and had a lot of fun. Gathered up a bunch of food for the food bank. Raised some money for the Humane Society too. I would have liked to had seen more cosplayers, but overall, it was an absolute success! Thanks for all the support, and I look forward to doing it again, hopefully in the fall.

As I like to do with my show, is recap it from other folks perspective, so we have a nice little photo gallery from our friend and regular contributor here at www.thestevestrout.com, Harold McKenney of H. McKenney Photography. Check him out HERE...and cosplayers, he is looking to fill his portfolio, so get in touch with him for great rates! Enjoy... 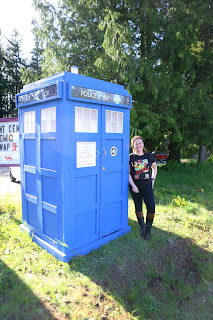 Thanks to Harold for the great pictures. Also a big thank you to C.S. Anderson (Alucard Press) for interviewing yours truly. He is not only a novelist, but he is a regular contributor at our friends at the  Sci Fi Monkey's website, where they also did their own report of the Comic Book Swap Meet! Please show them some support. Check out and share their great recap (and interview with me!!) at Sci Fi Monkey's #ComicBookSwapMeet recap HERE


Crypticon will be our next convention, which takes place May 27th-29th in Seattle. More details at www.crypticonseattle.com

As always, thanks for visiting, and if you'd like to contribute to the site, get in touch!!
Steve Strout is the media mastermind behind this site, host of the Comic Book Swap Meet, nerd, terrible artist, gamer, convention goer and comic book reader who spends more time rescuing toys from thrift shops than a normal adult should. He is also known around the northwest for his promotion of live music and stand-up comedy events and is the creator/producer of the Comic Book Swap Meet mini convention, and Olympic Peninsula Comedy Competition (which will make it's big return in 2015). Follow him on Instagram at http://instagram.com/thestevestrout, and  He can be reached for comments at ptcomedy@yahoo.com on twitter at @thestevestrout