Inteverview with the Guild star, Teal Sherer, aka Venom, and more...

Hello again! I'm really excited to share this interview with Teal Sherer. You might know her better as Venom on Felicia Day's award winning web series Guild! I'm honestly honored that she took the time out of her busyschedule to do this Q&A with me. I hope you enjoy the interview, and check out all her other projects, especially Teal's My Gimpy Life web series. It's pretty damn entertaining.

Before we get into the interview, I want to mention the Comic Book Swap Meet group on Facebook. It started as a promotional tool for the Comic Book Swap Meet events that we organize here in Port Townsend, WA. The Swap meet is basically like a miniature convention. We have a few dealers, Comic creators, collectors, costumes, gaming and more...On a really small scale. Eventually the Comic Book Swap Meet page became an online version of the event where everyone shares news, art, buys/sells, and trades, and just chats about comics, superheroes, tv, movies, and other pop culture goodness! Basically just a bunch of nerds B.S'n.  At the same time it will still be used to promote not only our events, but other notable conventions and events. Please join the group. Spread the word. I know there's a million other groups like this, but it's not ours! lol

Oh, we will be having another Comic Book Swap Meet event in the near future. We're just searching for a new venue, so if your in this area and know of any place, drop me a line! If you use the tweets and share this info, use the hashtag #ComicBookSwapMeet!

Now, Enjoy the Q&A with the lovely Teal Sherer!!! 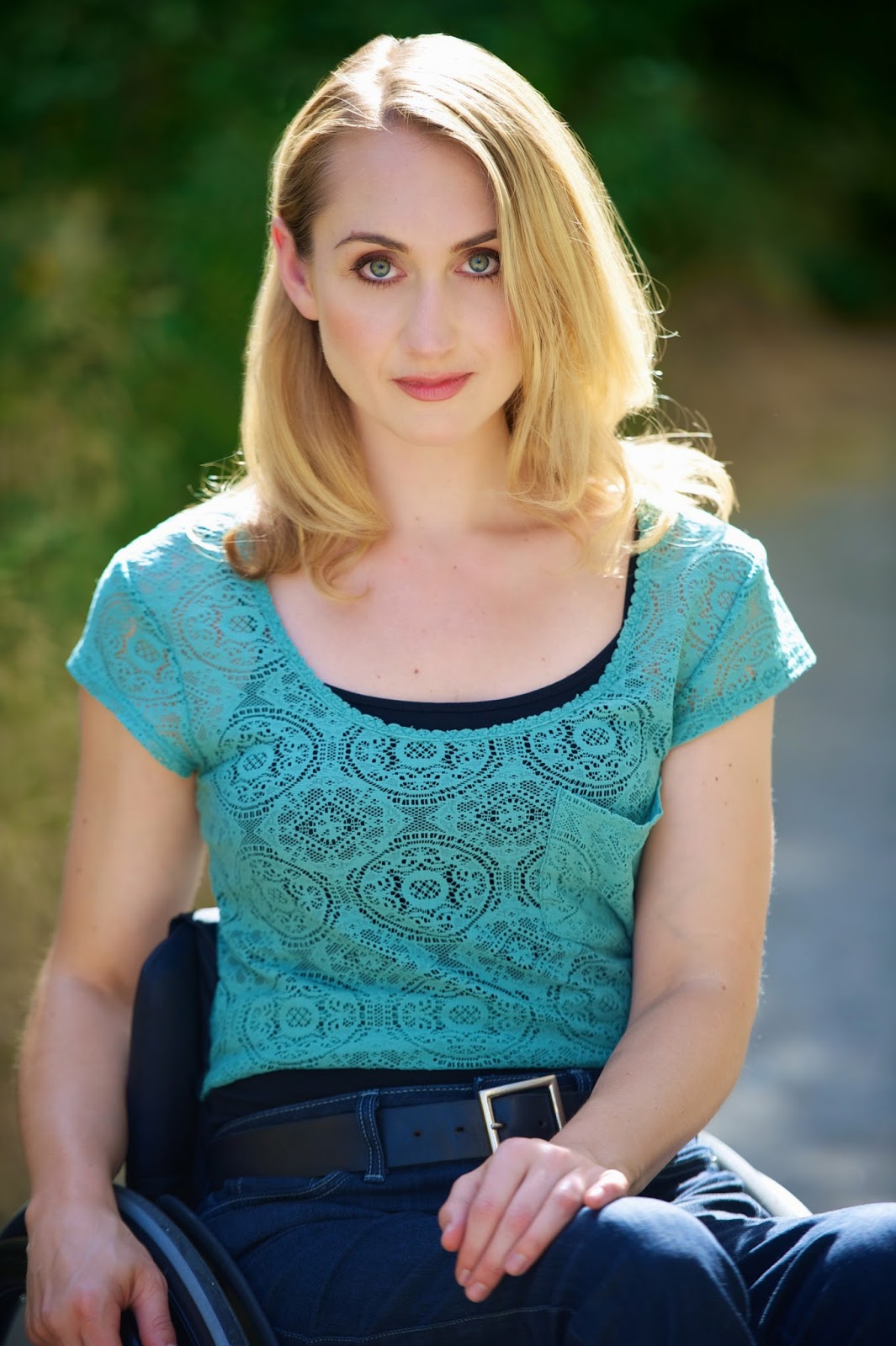 theSteveStrout: First of all, I'd like to thank you for taking time to chat with me. I know you are crazy busy with the web series, acting, dance, inspiring other actor/ actresses with disabilities, and just being awesome! What do you do with the little spare time you have? Any hobbies or anything?
Teal Sherer: Well, I love to binge watch TV shows.  Recent ones include all 5 seasons of Friday Night Lights and Season 2 of House of Cards.  I can't wait for Season 2 of Orange is the New Black. I also like to workout with my trainer, spend time with my German Shepherd named Bre, and drink wine with my friends.

TSS: What inspired you to get into acting?
Teal: I started acting in college.  I had to take a theatre class as part of my Communications major and fell in love.  My professor was very encouraging and cast me in roles that weren’t disability specific.  One of my favorite compliments I’ve gotten from audience members after seeing me perform is that they forget the wheelchair is even there, they just see the character.  TSS: Most of us know you as Venom on the popular web series, The Guild. How did you land that gig?Teal: Felicia Day and I met in 2004 on the set of the HBO film Warm Springs and have been friends ever since.  She wrote the part of Venom for me.  I've always been a big fan of The Guild and was so honored.

TSS: Since a lot of the people reading this are probably Guild fans, can you share a memorable or hilarious moment from the set of the Guild with us?
Teal: There is a funny behind-the-scenes moment on the outtakes where a beetle tried to attack Wil Wheaton during a scene we were filming.  Wil was freaking out, screaming and swatting at it.  I was so in character as Venom that I just looked at him like he was ridiculous and rolled my eyes.   It was really funny because everyone else broke character but me.


TSS: There are a lot of geeks out there like myself that wonder, are we gonna see you on the Guild again in the future?Teal: It’s my understanding that they aren’t doing any more seasons of The Guild, but who knows maybe they’ll do a movie one day and I’ll get to be in that. Fingers crossed. TSS: Obviously you have more to your resume than the Guild. You've appeared in award winning films such as Warm Springs. How was working with that cast of acting greats?
Teal:  I’ve gotten the opportunity to work with such acting greats as Kenneth Branagh, Kathy Bates, Dustin Hoffman and Annette Bening.   They are all so dedicated to their acting craft, and are just classy, professional and gracious.  It’s been a gift to work with and learn from them.

TSS: You also have your own web series called My Gimpy Life, which I find to be really funny. I'd call it a comedic chronicle of the life of a disabled but independent actress. I assume the character is a slight exaggeration on your own life/career?


Teal: My producing partner and the show writer, Gabe Uhr, and I are big fans of comedies like Curb Your Enthusiasm, Extras, and Louie and those shows inspire our approach. A lot of My Gimpy Life is based on my real life experiences, like the alley audition or the time a stranger asked me an extremely personal question in a bank parking lot.  We start with those moments, and then create characters and stories to heighten them. In real life, I generally avoid confrontation and brush those things off, but that wouldn’t make a very interesting show.


TSS: Do you find it harder in the business as an actress with disabilities?
Teal: The hardest thing about being an actor with a disability is the lack of auditions that come my way. Disabled people are out in the real world, but we’re underrepresented in films and on TV. I’d like the opportunity to be considered for roles that aren’t always disability specific, like the teacher, lawyer, best friend, or whatever.


TSS: You are also an activist involved with helping other actor/actresses with disabilities get work. What organizations can we look in to and maybe even get involved with to help out?Teal:My biggest advice would be to support actors with disabilities.  If they’re in a show, check it out, and if you like what you see, spread the word.  If you see an actor with disability in a TV show that you like, send a message to the show (via Twitter, Facebook, or their website) telling them how you feel.  On the flip-side, if you’d like to see an actor with a disability on a TV show, let them know.


TSS: I personally have no disabilities, but still find you to be such an inspiration. How awesome is it to be an inspiration to so many people, disabled or not?
Teal: I have mixed feelings about being called an “inspiration”.  Anyone who has watched My Gimpy Life Episode 3, which is titled “Inspirational”, will understand why.   I’m a lot more than my disability and often cringe when strangers call me inspirational for just being out in public doing everyday activities, like rolling down the street, grocery shopping, or going to the gym.  I know most people mean well, but I’m just living my life and it makes me feel less than when people put me on a pedestal just because I’m in a wheelchair.   On the flip-side, I peer support people who are newly disabled and show them that they can still have a productive, meaningful, great life.  So I guess you’d say I’m “inspiring” them and that means a lot to me.


TSS: What has been your personal favorite role, and if there was any role you could play, what would it be?
Teal: Playing “Venom” on The Guild has been my favorite role.   I would love to play a character like DC Comics character ORACLE, a super smart tech genius who fights for justice behind a computer screen while sometimes kicking butt out in the field. TSS:Do you have any projects you are working on or upcoming you can talk about?
Teal: Well, I just got back from New York City where I did a rehearsed reading of a new play called Happy Place with the Manhattan Theatre Club.  There's nothing like doing theatre in NYC and it was an amazing experience.  Besides that, I’m just focused on getting My Gimpy Life out there to more people.  We’d like to make more episodes and I hope the show leads to more opportunities for me as an actor.


TSS: Is there anything you would like to say to or share with your fans?
Teal: I just want to thank everyone for supporting My Gimpy Life, in particularly our Kickstarter Backers who made Season 2 possible.  If you haven’t seen the show you can watch all episodes (for free!) on our YouTube Channel:  www.youtube.com/MyGimpyLife

That about does it for now. Please feel free to share this post, Join the Comic Book Swap Meet Facebook page, and follow me on twitter for all the latest on my events and more...Oh and check out Godzilla next weekend. It looks pretty epic! Enjoy the trailer if you haven't seen one yet...