A Toy Store Near You is Coming Soon From the People Behind The Toys That Made Us! 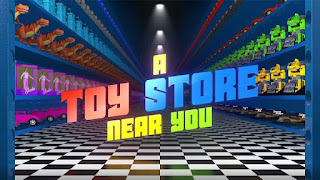 Did you guys watch THE TOYS THAT MADE US on Netflix a couple years ago? THE TOYS THAT MADE US was a docuseries from Brian Volk-Weiss CEO of the Nacelle Company, sharing the history of some iconic toy lines from many of our childhoods, including G.I. Joe, Transformers, My Little Pony, Star Wars, Masters Of The Universe and more! He dug in deep into the stories behind the creation and development of these "toys that made us"...and continue to shape our world with the popularity of vintage and retro toy collecting.

Well, Brian is now taking his knowledge and love for the collecting industry and using it as a tool to help many vintage retailers in these tough times caused by the Covid-19 Pandemic.

Volk-Weiss' Nacelle Company is producing and launching a new series called A TOY STORE NEAR YOU, spotlighting the great brick and mortar toy and collectible shops that are affected by the economic impact of Covid-19 and social distancing, in hoping to drum up some business for these awesome shops!

When I caught wind of the new series, I had to reach out to Brian Volk-Weiss with a few questions about the why and how:

TheSteveStrout: When and how did this latest series come together?

Brian Volk-Weiss: After COVID19 forced my two favorite  local vintage toy stores in Burbank to close, it made me want to do something to try to help them, and also all the other stores that I love in the US that I visit when I travel. That was the original inspiration, as I wanted to try to make some money for the stores ASAP, but also get them exposure to help their on line sales, and after COVID ends, in theory, help them have even more business than before the quarantine hit.
TheSteveStrout: Was the ball already rolling on the new series before the Covid-19 epidemic became an issue?

Brian Volk-Weiss: No, we started rolling after the quarantine went into affect in CA and Washington State (where the first episode was shot in Portland, Oregon).

Brian Volk-Weiss: Not at all, and in fact this is the fastest we have ever gone from idea, to shooting, to locked cut in our entire history.

TheSteveStrout: Besides the fact that we love nostalgia and vintage toys, why is it important more than ever to share these shops, and others like their stories?

Brian Volk-Weiss: I look at the show, now that we have the first episode locked and in color and sound correction, as not just a show about toys, but a core sample of the world during COVID19 and what's that like if you're a small business or work for one.  The same way the USS Enterprise is just one of many characters on Star Trek, the stores in this show are the same thing; they are the vehicle that holds the people that we care about.  Without the people, no one will care about the stores.  And luckily for us, all of the people are VERY moving, fun, and have powerful stories to tell (have some kleenex ready).
TheSteveStrout: Are there plans for more series along the lines of "The Toys That Made Us" and "A Toy Store Near You"?

Big thanks to Brian Volk-Weiss for taking the time for a quick Q&A. I really hope A
TOY STORE NEAR YOU has a positive impact on the featured shops as well as all the other similar establishments.

A TOY STORE NEAR YOU is set to start launching one or two episodes per week on Amazon Prime, YouTube, and Vimeo on May 29th.

Shops scheduled to be featured in the first season include:

Dr. Tongue's I Had That Shoppe - Portland, OR

Kokomo Toys and Collectables - Kokomo, IN

Toys From The Past - Lincoln, NE

We Can Be Heroes  - Chatsworth, CA

Have any of you visited any of these shops to be featured? What are your thoughts? Are there any great shops like these in your neighborhoods? I wanna know about them all! Post details on any of our social media outlets listed below in the bio...

I'm really excited about this show. Its more than just a series promoting great toy stores. It shows how we can help each other through a tough time through our mutual love of cool things. I  REALLY DO wanna go buy some toys now!