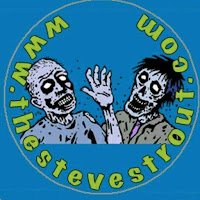 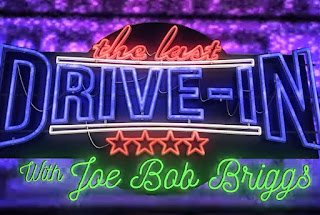 Hello from quarantine land, my friends and readers! How did you guys enjoy last weeks season 2 premiere of The Last Drive In w/ Joe Bob Briggs? It was a blast! 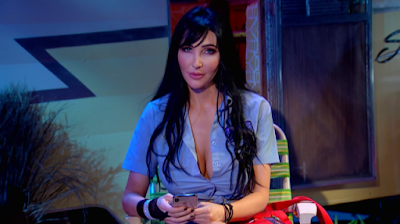 Now that episode one is behind us, we can announce the top 5 questions that you fans sent in for the amazing Darcy The Mail Girl as part of our giveaway!

We had fans submit questions for the Joe Bob's sidekick Darcy The Mail Girl, and I selected the 5 best for her to personally answer. Darcy herself selected her favorite of the 5 to recieve the grand prize of an autographed photo of her and the horror host legend, Joe Bob Briggs!

You folks sent in some awesome questions, so good in fact that Darcy wants you all to get a little something! She's so good to her fans, and puts so much into The Last Drive In. She is a horror genre treasure! 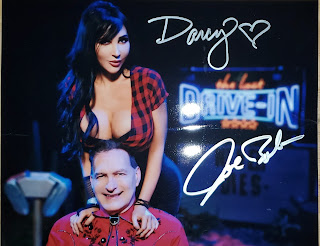 Here are the top 5 questions and Darcy's replies. With the announcement of the winner of the autographed photo to follow!

Question 1: If Darcy could be any movie monster she wanted, what would she be and what would her signature kill look like?

Darcy The Mail Girl: Not My favorite movie monster, but the coolest to actually be would definitely be a vampire. (I basically live the Vamp Lifestyle already... 😉) My signature kill would be Once Bitten-style so we could at least have a lil’ fun first! 😉

Question 2: Do you think movies shown on 'The Last Drive-In' should only be horror-related or should they incude trashy flicks of all genres?

Darcy The Mail Girl: I would love to branch out to other forms of “trashy” flicks...Movies like Gator Bait, Coffy, Starcrash, anything Shaw Brothers, on up to Porky’s and Ski School all have a place at the Drive-In. 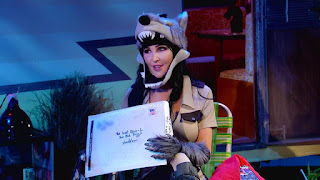 Question 3: Would you consider showing one of your movies on The Last Drive-In? Beach Massacre at Devil Kill Hills, Bunnyman, or Powder Blue?

Question 4: Joe Bob had mentioned after the fact that the only reason Shudder was able to show The Hills Have Eyes during the Dinners of Death marathon was because you made a personal appeal to the producer (I assume Peter Locke?) to license the film to Shudder, two days before the marathon was to air.

What made you decide to take it upon yourself to seek the licensing rights to the film, and how were you able to convince the rights owner to license it?

Darcy The Mail Girl: I just couldn’t imagine having that Dinners of Death marathon without that movie! We had Michael  Berryman all set to go, and I was really hoping to do the charity auction in the spirit of Thanksgiving. 😊

When I found out they were just going to give up on trying to get the rights, I decided I had to do whatever I could to make it happen. I found Peter Locke’s contact info via IMDB pro and harassed him in every possible way...email, phone calls, and even dropping flowers off at his house! 😋...to try to plead with him to let us show the film. He was very cool & gave us the rights literally the night of the deadline, I believe. (And I thank him again sooo much for that!!! 🖤🖤🖤)

Question 5: Since you know so much about horror and have a knack for writing, do you have a dream project you would like to make? Let's say I'm the studio head and I'm like "Ms. Darcy, here's 200 million, use as much or as little as you want. Cast DiCaprio, Tom hardy, or whomever, sky's the limit. Make it gory, freaky, whatever suits your taste, you're the writer and director, we just want your horror vision." What would we see?

2. I’d use that money to make several much smaller (but still awesome!) films.  I don’t think you need a huge budget or mainstream stars to make quality genre films. I’d want to adapt the Corman style of filmmaking...but it would DEFINITELY still be gory and freaky.

And...Darcy's favorite question of the bunch is QUESTION #4, submitted by Shane Sturdivant via the Comic Book Swap Meet Facebook Page! Shane and all the runner ups will be contacted for their info very soon! 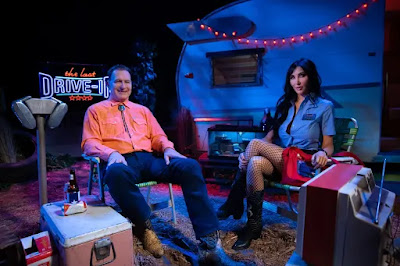 We had so many great questions come in, that Darcy wanted to answer a couple of the runner up inquires too, so heres a couple bonuses for Darcy's Q&A:

Bonus Question 1: Which post-2000 horror franchise is worthy of a all-nighter drive-in marathon, and why is it Rob Zombie’s House of 1000 Corpses trilogy? And when is Rob Zombie coming on the show?

Darcy The Mail Girl: Haha honestly, that would be fun, but I think I’d have to go with the Wrong Turn series...though I would KILL to have Rob Zombie on the show.

Bonus Question 2: It she took over hosting duties for an episode of #TheLastDriveIn, what two movies (besides Halloween 3 and Hogzilla) would she want to present?

Darcy The Mail Girl: I have a HUGE list of movies I’m DYING to show, and those two are definitely at the top! If we take those out, though, I *think* my next 2 would be Popcorn (bc I want to introduce more people to that cl-ass-sick) and Scream (bc it’s my all-time fave!)

Thank you to everyone for participating in this cross promotional contest with thestevestrout.com and Darcy The Mail Girl, co-host of The Last Drive In. I'm pretty sure I can speak for Darcy and Joe Bob when I say they appreciate and love you fans, as I appreciate the continued support from you all for little ol' site! I really want to continue to do contests and events like this featuring our favorite performers, artists, personalities and the such, so keep visiting the site, following on social media and spreading the word on us! 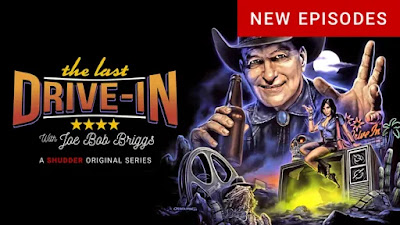 Be sure to watch The Last Drive In friday nights on SHUDDER. If you're not already a viewer of SHUDDER, they offer a free trial to allow you to check it out. Details at shudder.com! Also be sure to be following Joe Bob and Darcy on Twitter at @kinky_horror and @therealjoebob

Be well everyone,
Steve!