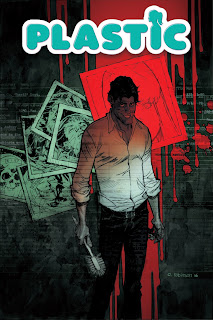 Another interesting book I was introduced to at ECCC was the upcoming Image release, Plastic. I had the opportunity to chat with the writer/ creator of Plastic, Doug Wagner. He gave me some info on the story and shared a few sample pages from the book. If you're into horror, crime drama, and have a really weird sense of humor, this book is probably right up your alley. It looks like Image has come through with a killer (pun completely intended) comic once again.

Check out this preview chat with Doug Wagner. I think you'll be intrigued, especially once you see the art samples he shared with us!

TheSteveStrout: Can you give us a summary of Plastic?

Doug Wagner: Plastic is about Edwyn Stoffgrupen, a “retired” serial killer who just happens to be in love with Virginia…a blow-up sex doll. When somebody kidnaps Virginia in an attempt to manipulate Edwyn, a bloody trail of decapitated bodies, plastic sporks, and crème-filled doughnuts follows. Here’s a small piece of advice…it’s probably a bad idea to steal something from a serial killer. Just sayin’.

TheSteveStrout: What inspired such a unique story? 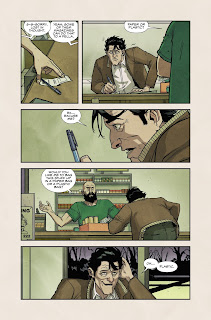 Doug Wagner: A road sign. Yep, you read that correctly. The entire idea of Plastic is based on a road sign. See, I was on a road trip with Eric Layton and Brian Stelfreeze. We had decided to road trip it from Atlanta to Baltimore one year. There was a lot of laughing, eating the unhealthiest of foods, and all manner of general silliness…as you might expect from this crew. At one fateful point when we were crossing the Virginia state line, I read the “Buckle up, Virginia” sign out loud in the most disturbing Southern accent I could muster. The moment I said it the entire story just popped in my head. No, I can’t explain it. Sometimes the Muses speak to you in barely audible whispers and sometimes they just cram an entire story into your brain.

TheSteveStrout: Will Plastic be a mini-series or ongoing?

Doug Wagner: Plastic will be a 5 issue mini-series beginning monthly in April. The good news is Daniel Hillyard, the book’s artist, is just now finishing up the final few pages of the fifth issue. We’re way ahead of schedule, and unless something disastrous happens, every issue will be on time. 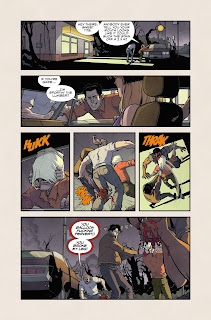 TheSteveStrout: I was lucky enough to scope out a few pages at ECCC, and absolutely loved the work as a horror fan, as it was nice and gory. Who did the art, and how much easier did the story come together working with this artist(s) style?

Doug Wagner: Daniel Hillyard is the artist and a longtime collaborator of mine. Daniel and I have been working together on various projects for over 5 years now. I absolutely LOVE working with Daniel, so he was my first choice when it came to putting this project together. When I pitched it to him, he immediately loved it. I didn’t know this until that moment, but apparently Daniel is a horror nut. Figures, right? He knew exactly how he wanted to approach the book. He was also pivotal in helping me figure out just how far we wanted to take the bloodletting, the subject matter, and this quirky love story wrapped in gore.

TheSteveStrout: You mentioned Plastic hits shops in April via Image Comics. Do we have an exact date? 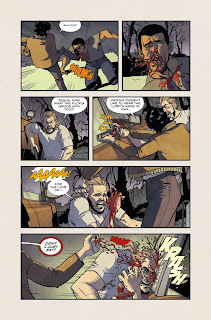 TheSteveStrout: I feel like Image isn’t afraid to push boundaries with their titles, having more "grownup" comics. Do you feel that being published by Image, gives you a little more creative freedom with a story like Plastic than other imprints might, and did that have any influence on pitching the book to them specifically?

Doug Wagner: I can’t really speak to whether another company or imprint would have given me the latitude that Image Comics has, but I can tell you that the entire staff at Image has been a pleasure to work with and fully supportive of this book. Plastic couldn’t have found a better home. Plus, I started my career at Image back in 2004 and can’t tell you how happy I am to be back. Image is filled with a great group of folks that have helped me at every turn. I love this place!!

TheSteveStrout: Anything else in the works at the moment? 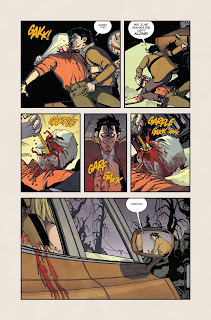 Doug Wagner: Well, Image just announced THE HARD PLACE coming out in August from Nic Rummel and myself. It’s another 5 issue mini-series, but completely different than Plastic. THE HARD PLACE is a straight up action thriller with bank robbers, Russian mobsters, car chases, and lots of bullets and mayhem. Sorry, no blow-up sex dolls in that book. J

TheSteveStrout: What are some other notable works of yours, and where can readers keep up on your latest (social media and the such)?

Doug Wagner: I’ve been fortunate enough to work with several companies over the past decade – DC Comics, Image Comics, 12-Gauge Comics, Dynamite Entertainment, Top Cow Productions, and Table Taffy Studios. Probably my most recognizable works would include the WORLD OF WARCRAFT: BLOODSWORN OGN, a stint on LEGENDS OF THE DARK KNIGHT, and the BATMAN: ARKHAM ORIGINS graphic novel. If you’d like to keep up on my work, travel, and general silliness, you can follow me on Facebook at Doug.Wagner13, on Twitter @Doug_Wagner, or keep tabs on my website at www.shocknoggin.com. 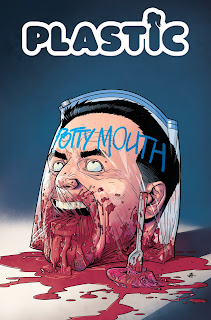 I'm also still looking for contributors to the site. If you're interested in covering any conventions you attend, or reviewing comics, tv, or movies or anything nerdy or involving pop culture (unpaid, but I still occasionally come up with goodies and swag), get in touch!


Our next conventions will be: