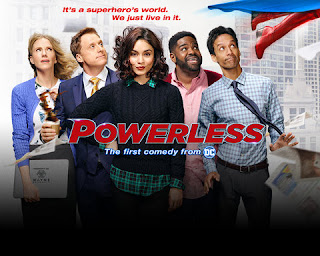 Powerless is the latest network show from DC Comics, though not your typical comic book program, due to not really being a superhero show, but more of a parody of the superhero universe.

DC's first attempt in the sitcom world introduces us to a solid cast led by Venessa Hudgens, who portrays Emily, a research/development specialist hired to save a failing division of Wayne Industries (Yeah that Wayne Industries from Gotham City) in Charm City, ran by Bruce Wayne's 'half witted' cousin Van (Alan Tudyk, Firefly) and an underachieving crew of product developers.
Powerless has a very Parks and Rec or The Office feel to it, in the idea of our group of misfits and contrasting personalities being led by the level headed motivated go getter in Emily (much in the way Leslie or Jim's characters were portrayed on Parks and Rec and the Office, respictively).
Its early to really judge whether the show will grow beyond a series full of quick witty jokes, or will develop the characters and give them more substance...

The thing is, the show still works brilliantly thanks to the perfect comedic cast for what I believe the show is offering, featuring the aforementioned Alan Tudyk as Van Wayne, as well as Danny Pudi (Community) as the awkward Teddy, Ron Funches (Undateable, @midnight) as the charming Ron, and Hudgens (High School Musical) as the bubbly and likeable Emily. They all bring their own brand of comedy to make this thing work for the long haul.