About 10 years ago, I was at a convention dealers booth checking out his "bootleg" dvd collection, checking out all the cult classics and movies that never really saw the light of day. One movie I came across really intrigued me was Roger Corman's unreleased Fantastic Four film, which I'd only heard about. 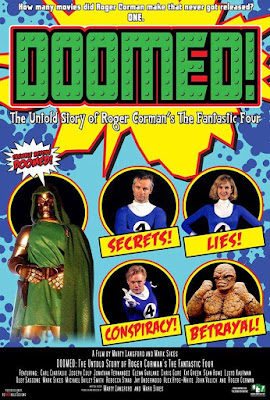 Needless to say, the movie sat in my collection and remained unwatched, like it was apparently meant to be until a couple years ago when I heard about the latest Fantastic Four reboot (which definitely shouldn't have been released). Well, I finally got around to watching Corman's FF movie, and other than the low budget quality, I really didn't mind the movie. I honestly found it entertaining.

I decided to research the movie a bit, to see why it wasn't released, and didn't find out much other than it being made in order for the studio to keep the rights to the franchise. Though they did try again to make the FF films (which I enjoyed, though critics hated them), there's always been curiousity about Corman's go at it.

I was recently introduced to this documentary, Doomed: The Untold Story Of Roger Corman's "The Fantastic Four". This well made doc tells the whole story about Corman's effort from concept to the non-release, and features commentary from the movie cast and creators.

Marty Langford (Director) and Mark Sikes (producer) really do a great job in emphasizing all the hard work this cast and crew put in to this film, and show that on a shoestring budget, and some talent, you can really make something to be proud of. I did get the feeling from the cast interviews that everyone was, in fact, proud of their work to the point that they went on the road to promote the film on their own dime.