Pretty Good Week: Why so much Batman v Superman Hate?

Hopefully you all checked out the Emerald City Comic Con (ECCC) preview interviews with the legendary Tim Sale and fantastic indie creator, Ryan Fisher...if not, you know where to find them. Who is going to be at ECCC? Let us know on Twitter @thestevestrout or on Facebook in the Comic Book Swap Meet group..


The week was good and productive, with the interviews mentioned and preparation for ECCC. I also checked out the much awaited Batman v Superman movie this past week. Though it had it's flaws, in my opinion, being a tad long and kinda of poorly scripted, the cast was brilliant. Everyone nailed their roles. I was very nervous about Affleck as Bats/Bruce Wayne, but he laid those doubts right to rest. I look forward to seeing what DC has in store for us on the big screen, after recent let downs...This movie is not deserving of all the hate it's been getting...Have you seen it? What are your thoughts?

The Comic Book Swap Meet is coming together well...I know you were wondering...Im really excited about our guests (subject to change....of course), including Ryan Fisher, the creator of Torchlight Lullaby... Greg Smith, the writer of the Oni Press title Junior Braves Of The Apocalypse... And guest of honor Mark Rahner, of Rotten, Twilight Zone, Vampirella fame and so many more. He's also known as a film critic, cast memeber of the BJ Shea Geek Nation Podcast, and radio host...Last but not least, Scott Adams, the artist and writer of the indie series, Sukotto. Watch for a special announcement from Scott and thestevestrout.com about a special show pass were working on! 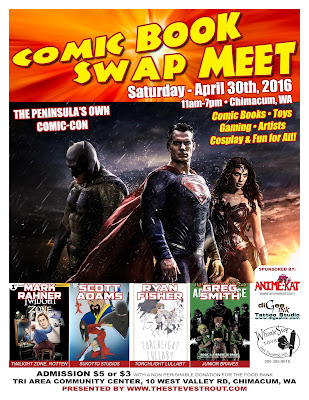 How about that Walking Dead cliffhanger??