Ok, since these "Cool Projects" postings are becoming a regular thing, Let make it an official www.thestevestrout.com featured series. This group of awesome will be #3...Check out, enjoy, support, and share Cool Projects #3...
I literally just found out about this Lost Hope web series from our friend Vince Caso, who is best known for his role as Bladezz on Felicia Day's The Guild...The series, created by Jeff Saamanen, Natalie Harvey, and Myke Allen, is described as a cross between Archer and Battlestar Galactica! This trailer, introducing some of the characters was enough to get me not only intrigued, but pretty excited for Lost Hope.

There will be a Lost Hope Kickstarter starting in January so hopefully you can help get this show off the ground. For more info check out www.losthope.tv ...Be on the lookout for a Q&A with Vince Caso too!


Next up we have Sukotto. A Martial Arts/Supernatural action packed comic series, already on its 5th issue, with the 6th on its way. If your a regualar here at the site, you were introduced to the series early on in our interview with the comic creator, Scott Adams. This self published book is selling out at comic shops, and since it just went full color, it's going to only get better., so if your into ninjas, and demons, and ninjas kicking demon ass, then you will dig this. Go back and have a look at the interview with Scott, if you missed it HERE, and be sure to like the Sukotto Facebook page:  www.facebook.com/sukottostudios/


This comic isn't an indie book like a lot of the stuff we've been pushing, but Ringside has a place in my heart. I've been a pro wrestling fan off and on all my life. It's one of the earliest things I recall geeking out about (along with Star Wars and Comics), so I was really excited when I heard about this series, about the violence and drama in and out of the ring in the pro wrestling business. The series has been in the works for a while with writer Joe Keatinge, but it finally came into fruition when he connected with the perfect artist for Ringside, in Nick Barber. I had the chance to talk to Joe and Nick about Ringside a couple months back (Click here to read). Ringside is published monthly by Image Comics with issue 2 being published later this month. I really think it's worth checking out, if not as a wrestling fan, but for Keatinge's writing and Nick Barber's artwork! These guys should be household names in no time.

Take a look at my friend's chainmail work too. This stuff makes awesome gifts. Very unique and beautiful art! Go check out her shop at Www.scarlettstreasure.etsy.com 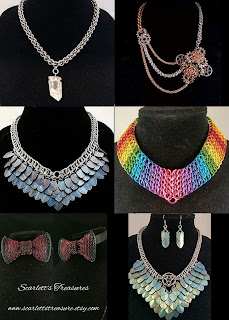 That'll do it for this round. Don't forget, we're doing a giveaway once we hit 1000 followers on Twitter, so go follow and tell your friends... @thestevestrout