San Diego Comic Con is upon us, and with that brings the influx of nerdy news. Though we're not at SDCC to cover the con, we follow the abundance of news dropped on social media from our favorite sources.


There's far too much bog news for us to discuss, but we're gonna mention some of the more intriguing stories so far...

-The thing I'm most looking forward to this year, Star Wars Episode VII...What more do I need to say that can't be expressed here in these videos:


Then, there's all the upcoming movie teasers and trailers, most of which have been leaked, then pulled off the internet by the studios like The Suicide Squad and Deadpool ones. The Dawn of Justice one was officially released, and looks amazing. I was honestly skeptical about the movie at first, but after this new trailer, I'm all in...


Other super exciting film announcements include the Batman: The Killing Joke animated film and the Green Lantern Corps movie. Lots of TV show news too including unveiling of the new Arrow costume, CW/DC television details and trailers for shows such as Supergirl, Ash vs Evil Dead, and THESE:

There's far too much to discuss, and SDCC is far from over, but one more thing that MUST mention is the announcement of the IDW/DC comics team up on the the Batman and Teenage Mutant Ninja Turtles crossover! I'm way too excited about this team up, and I hope to get some comments on the pairing from IDW/DC representatives soon... 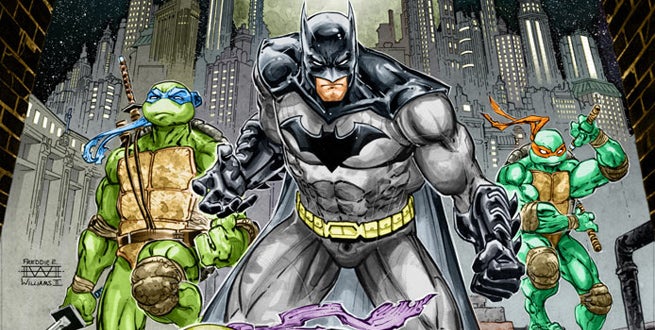 What news from Comic Con has you most excited so far? Comment and chat about it over in our Facebook group at www.facebook.com/groups/comicbookswapmeet/


Since were discussing conventions, I oughtta take a second to announce the next few I will be at and covering (click the convention banner for more info on the show):

I want to give a quick shout out to my friend Michael aka Delmar and his You Tube channel where he talks nerdy toys, especially Funko collectibles...I gotta show love to my toy nerds!!! Subscribe to his channel, Delmar Collects, and go follow him on twitter @delmarcollects  and enjoy his collection.

I got these too...who wants to represent and wear one?